END_OF_DOCUMENT_TOKEN_TO_BE_REPLACED

China's explosive growth is the real reason it is Buying Gold...

IF INTEREST RATES go up, will demand for gold automatically go down?

Other things equal, the answer should be yes. A higher return on cash raises the opportunity cost of Buying Gold, thus dampening demand.

Alas, other things are seldom as equal as economic theory likes to assume, writes Ben Traynor at BullionVault.

The evidence from China, for example, suggests that while higher rates certainly have the potential to dent gold demand, far more important drivers are inflation and growth.

China's experience may not be typical, but it's certainly worth examining. China is the world's second biggest gold market after India. The latest World Gold Council data show that China accounted for one quarter of global gold consumption by tonnes in the first three months of 2011. 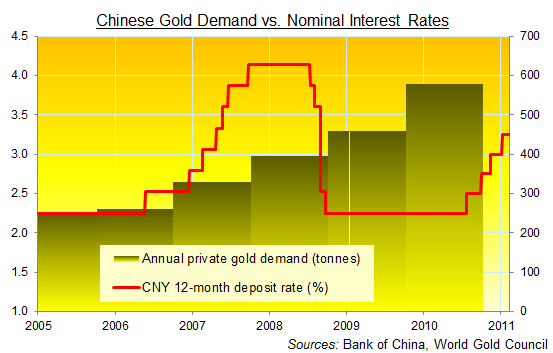 Six months ago, as the People's Bank of China (PBoC) began a series of rate hikes, market watchers predicted that Chinese gold demand would fall as a result:

Since these predictions were made, the PBoC has continued to raise interest rates. And Chinese gold demand – measured as total Yuan expenditure on gold – has shot up...along with the Gold Price.

This is not to say interest rate policy has no impact at all. If we look at real interest rates – the nominal rate minus inflation – we can see that higher real rates have tended to coincide with slowdowns in gold expenditure: 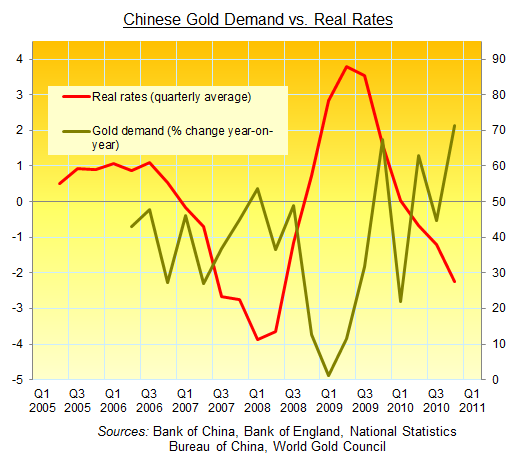 Therefore while higher Yuan deposit rates may have a short-term impact on gold demand, if they fail to bring down inflation the effect will be short-lived. And how often does monetary policy do what it says on the box?

Besides, the PBoC is unlikely to opt for really whopping rate hikes. China's president Hu Jintao reportedly once told George W Bush, that what kept him awake at night was how to create 25 million new jobs each year.

The Chinese authorities are terrified that slower growth will cause social unrest. And there are already potential early indicators of a slowdown. China's industrial output growth for the year to April was 13.8%. While this is impressive by western standards, it's a significant drop from March's figure of 14.8%.

You don't foster growth with eye-watering interest rate hikes. The PBoC knows this, which is probably why it has leaned far more on non-interest rate policies in its tussle with inflation.

For example, it has raised commercial banks' reserve requirements – the proportion of customers' deposits they have to hang on to, rather than lend out – five times already this year, in an effort to limit credit growth.

China also showed last week that it is willing to take the direct approach when it comes to curbing price rises. In a move that brought to mind President Nixon's price controls of the early 1970s, the Chinese government fined Unilever for talking publicly about possible price rises.

Along with inflation, the other big driver of Chinese gold demand is economic growth. The country's blistering growth rate means more people can now afford to Buy Gold, as disposable incomes are higher.

In 2004 Kamal Naqvi, then a precious metals analyst at Barclays Capital, predicted that higher GDP would cause Chinese savers to substitute out of gold:

"Given that China's economic development is likely to continue and the growing global influence of western culture (which tends to be negative for gold), we can expect China's income spend on gold to continue to decline"

To be fair to Mr Naqvi, his analysis was sound, given the data at the time. But his prediction is the exact opposite of what happened: 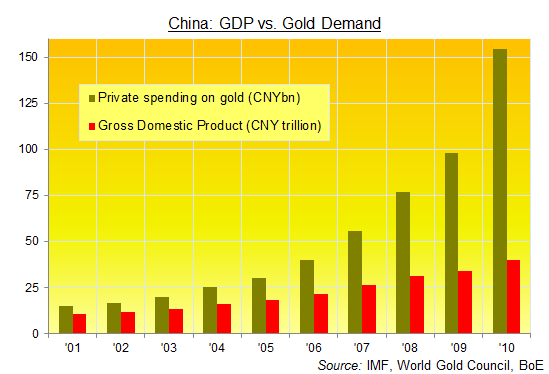 China's economy has continued to grow, more than doubling since 2004. Over the same period, Chinese spending on gold has gone up by more than 500%.

This is counterintuitive for some westerners, who associate higher gold demand with a gloomy economic climate. One explanation is that as China grows richer, more people cross the threshold above which they can afford to Buy Gold. This implies many other would-be gold buyers could be sitting on the sidelines, not yet wealthy enough to join in.

The bottom line is that gold demand in the world's second largest economy is only marginally driven by interest rates. Economic growth and inflation expectations matter more.

Looking to protect your wealth by Buying Gold? Open an account with BullionVault and start your own private gold reserve with a free gram of Swiss bullion...