END_OF_DOCUMENT_TOKEN_TO_BE_REPLACED

Inflation rose faster than interest rates in June. Get used to it. Again...
SO WHY DO people buy gold and silver? asks Adrian Ash at BullionVault.
The answer from a quick survey of Bullionvault users last week couldn't be clearer:
Inflation. Or rather, the erosion of money's purchasing power.
Yes, diversification is a good reason to buy gold. But when current investors were asked, gold polled over 50% more votes as "an alternative to cash" than "to diversify my portfolio". And amongst the 300 people who took part last week, the key point that came through from Bullionvault's survey overall was the wish to escape cash in the bank.
Today's UK inflation numbers show the need to flee cash is growing, whether to buy gold or other hard assets. The government's preferred measure, the Consumer Price Index, rose 2.9% last month from June 2012. That was below analysts forecasts of 3.0% but up from 2.7% in May.
UK interest rates in contrast have been stuck at 0.5%. So savers keep paying for the excesses of the credit bubble, subsidizing both the banking sector (which is eternally grateful) and government (which will miss you when you're gone) by literally losing money in cash.
History says savers are likely to keep paying for much longer yet. Fish in a barrel are there to get speared after all. And after the Great Depression, interest rates were held at 2.0% for nearly two decades.
September 2013 will mark only five years since inflation overtook interest rates on the CPI measure, delivering a net loss to cash savers every month since. The upshot for UK savers so far? Every £1,000 held at Bank Rate since the financial crash a half-decade ago is now worth £903 in real terms. At least it's, umm, safe. That same £1,000 used to buy gold on the other hand – vaulted securely or stuffed into your sock drawer as you fancy – would now hold £1,494 of purchasing power.
Of course, that gain from buying gold is sharply down from the peak of summer 2011. Your £1,000 in gold was then worth a massive £2,223 at the end of August, up by 122% inside three years in real terms. The old joke says that a long-term investment is a short-term investment gone wrong. More recent gold buyers might fear the joke is on them.
But with real losses so clearly flagged for bank savers ahead, what could prove a worse choice long term than the "safety" of cash on deposit? US savers might well ask the same. Because for all the talk of "tapering", real US interest rates actually fell in June, if only a little. Because US inflation rose faster than interest rates.
You might want to get used to that situation. Again. 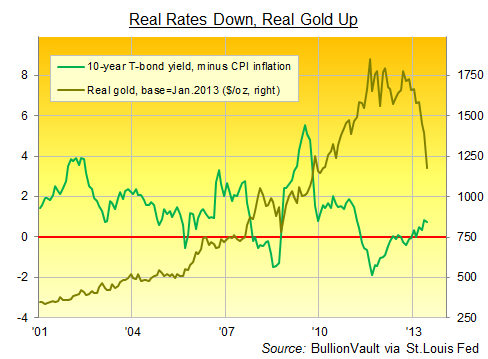 Now, as we've said before, real US interest rates aren't a clanging bell which you can use to buy gold or sell it for profit tick-by-tick. More's the pity, too. You can see how the big top of summer 2011 coincided with a big low for real rates. If only we'd known!
Nor do falling real rates guarantee you'll get a real rise in gold prices either. Only 55% of the time since 1971, in fact, did gold rise faster than inflation as real interest rates fell.
But the direction of travel in real rates does matter to gold. Because buying gold loses its urgency when cash itself beats inflation (bringing diversification into focus by the way). And in those months since 1971 when real 10-year Treasury yields rose from the month before, gold averaged a rise in real inflation-adjusted terms of 0.1%. But in those months when real 10-year, yields were falling, in contrast, gold rose 1.6% on average in real terms.
Put another way, trying to trade against trend would mean missing the biggest and best months in gold overall. And for long-term savers, trying to grow your real purchasing power with cash or fixed-income bonds will prove laughable if rates don't outpace inflation.
Which is why people buy gold.