END_OF_DOCUMENT_TOKEN_TO_BE_REPLACED

The US labor market has moved significantly towards part time rather than full time jobs...

THERE HAS been a significant structural change in US labor markets in the years since the financial crisis, and that is the economy's composition of full time vs. part time jobs, writes Gregor Macdonald.

The US in the previous decade shouldered nearly five full time jobs for every part time job. But that ratio changed, rather dramatically, after 2008 and has not really recovered. 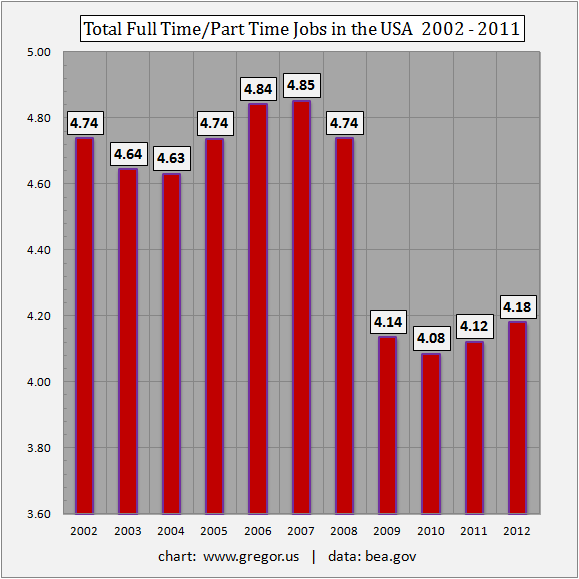 No doubt, a few economists and some business leaders will be inclined to argue that the trend is not entirely negative. Fair enough. Perhaps it indicates flexibility in US labor markets, especially as the economy tries to recover through the formation of small business. Also, it makes sense that an economy trying to recover would first add back part-time work in equal amounts to full time work, before stepping up to the array of benefits extended to the full time worker.

But therein lies the problem: American workers desperately need health-care coverage, which is not typically offered to part-time workers. Meanwhile, deleveraging of household balance sheets since the high debt levels of 2007 has been mild. The result is yet another way to see how deeply consumer demand is restrained: there's not enough work to both pay down debt, and restart consumption.

Until the US confronts the reality of health care costs, and the outstanding debt levels of households, there should be little expectation that sectors like housing will see much of any recovery.

While it's true that reduced consumption more generally, compared to the excesses of the past few decades, is a long-overdue change that the US economy sorely needs, it is also true that any desired shift to a more productive economy in which output rises faster than consumption will not likely occur on the back of part-time work. It sounds so boring to say: the US economy needs a return of high-paying, full-time jobs.

If this does not occur soon, the associated political unease will continue to fester and a new conversation about health-care policy, one that is less partisan(?), will have to ensue.