END_OF_DOCUMENT_TOKEN_TO_BE_REPLACED

Few concepts are as misunderstood as inflation...

WHILE inflation seems to be on everyone's mind these days, misconceptions abound, says Steve Hanke, professor of applied economics at the John Hopkins University in Baltimore, writing for Bill Bonner's Daily Reckoning.

Indeed, few concepts in economics are as misunderstood as inflation. This month I take a look at some common questions about inflation, and a few that I wish more people were asking.

Is hyperinflation coming to the US?

No. Hyperinflation arises only under the most extreme conditions, such as war, political mismanagement, or the transition from a command economy to a market-based economy. If you compare the US to countries that have experienced hyperinflation – think Iran, North Korea, Zimbabwe, and the former Yugoslavia, for example — the US doesn't even come close.

Hyperinflation begins when a country experiences an inflation rate of greater than 50% percent per month — which comes out to about 13,000% per year. Although it experienced elevated inflation around the time of the Revolution and the Civil War, the United States has never passed this magic mark. At present, the US inflation rate, measured by the consumer price index (CPI), is less than 2% per year. So, to say that the US is on its way to hyperinflation is just nonsense.

But what about Quantitative Easing? Won't that cause high inflation?

No, at least not under the current QE program. What many people fail to understand is that the money created by the Fed, through programs like Quantitative Easing, is what's known as "state money" (monetary base). In the US, this makes up only 15% of the money supply, broadly measured. The remainder is made up of "bank money" — the all-important portion of the money supply produced by banks, through deposit creation.

So, while the Fed has more than tripled the supply of state money since the collapse of Lehman Brothers, in September 2008, this component of the money supply is still paltry compared to the total money supply. In fact, when measured broadly, using a Divisia M4 metric, the US money supply is actually 6% below trend (see the accompanying chart). 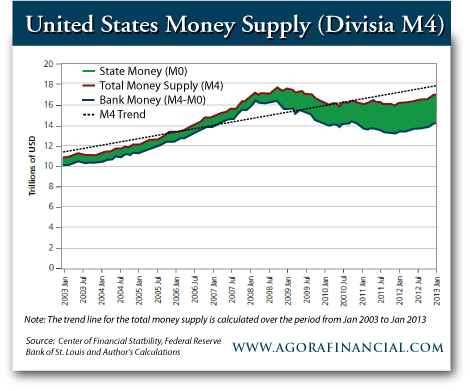 There are a number of factors that affect the growth of money, but there are two main factors that have hampered broad money growth in the United States since the financial crisis. Not surprisingly, they are both government created. The first is the squeeze that has been put on the banks, as a result of Dodd-Frank and Basel III capital-asset ratio hikes. By requiring banks to hold more capital per Dollar of assets (read: loans), the regulators have put a constraint on bank's balance sheets, which limits their ability to lend. In consequence, money supply growth has been slower than it would have otherwise been.

The other factor is the credit crunch created by the Fed's zero-interest-rate policy. This has dried up the interbank lending market, because banks have little financial incentive to lend to each other. Without a well-functioning interbank lending market to ensure balance sheet liquidity, banks have been unwilling to scale up or even retain their forward loan commitments.

The end result is a loose state money/tight bank money monetary mix. And since bank money makes up 85% of the total, the money supply in the US is still, on balance, tight and below trend. That said, the broad Divisia M4 measure of the money supply has started to show signs of life in recent months.

How Can The Fed Avoid Inflation Going Forward?

The Fed should start paying attention to the Dollar. While operating under a regime of inflation targeting and a floating US Dollar exchange rate, Chairman Bernanke has seen fit to ignore fluctuations in the value of the Dollar. Indeed, changes in the Dollar's exchange value do not appear as one of the six metrics on "Bernanke's Dashboard" — the one the chairman uses to gauge the appropriateness of monetary policy. Perhaps this explains why Bernanke has been dismissive of questions suggesting that changes in the Dollar's exchange value influence either commodity prices or more broad gauges of inflation.

The relationship between the Dollar's value and inflation has been abundantly clear for the last decade. As Nobelist Robert Mundell has convincingly argued, changes in exchange rates transmit inflation (or deflation) into economies, and they can do so rapidly. This relationship was particularly pronounced during the financial crisis (see the accompanying chart). 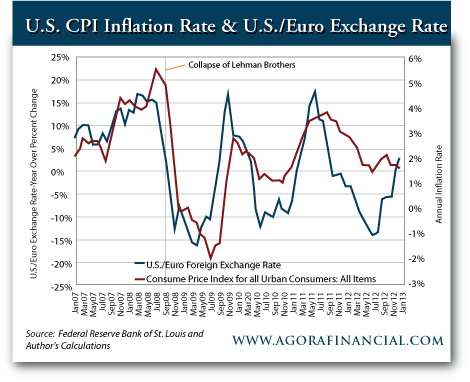 By ignoring this, Bernanke was "flying blind" in the initial months of the crisis. In consequence, the Fed failed to stabilize the USD/EUR exchange rate, which swung dramatically in the months surrounding the collapse of Lehman Brothers.

Accordingly, the Fed acted too slowly in cutting the federal funds rate to stabilize inflation, which swung from an alarming rate of over 5% (year-over-year), to a negative (deflationary) rate in a matter of a few short months. If Bernanke had been monitoring the USD/EUR exchange rate, he would have realized that he was engaging in an ultra-tight monetary policy in the early months of the financial crisis. He would have known then to act much sooner than December 2008 — almost two months after the Lehman bankruptcy. Perhaps if he had tried to stabilize the value of the greenback, the bankruptcy may never have occurred in the first place.

Thinking of buying gold or silver? Make it safer, cheaper and easier with BullionVault...