END_OF_DOCUMENT_TOKEN_TO_BE_REPLACED

NEARLY 10 years after the financial crisis brought the global economy to its knees, conditions have finally improved enough to crystallize my conviction that synchronized global growth is currently underway, writes Frank Holmes at US Global Investors.

Revenue and earnings growth are up year-over-year, not just in the US but worldwide. Despite President Donald Trump threatening to raise tariffs and tear up trade deals, global trade is accelerating. World manufacturing activity expanded to a 78-month high of 53.5 in October, with faster rates recorded in new orders, exports, employment and input prices.

Optimism among US firms was at its highest since 2014, with sentiment above the global average for the second straight survey period.

Small business owners' optimism remained at historically high levels in October, according to the latest survey conducted by the National Federation of Independent Business (NFIB). Its Small Business Optimism Index came in at 103.8, up slightly from September and extending the trend we've seen since the November 2016 election.

US, Europe and China's economies are strong, which is igniting the rest of the world. The Eurozone purchasing manager's index (PMI), in particular – rising to 58.5 in October, an 80-month high – is very constructive for world economic growth in the next six months.

Deutsche Bank chief international economist Torsten Slok makes the case that global economic health "has never been more robust," citing the fact that the number of countries in recession has dropped to its lowest level in decades.

"We have never seen a smaller number of countries in recession as we do at the moment," Slok said. "And if you look ahead to the next few years...we are going to see that fall even lower."

The Organization for Economic Cooperation and Development (OECD) backs up this claim in its quarterly economic outlook. According to the Paris-based group, synchronized global growth is finally within sight, with no major economy in contraction mode for the first time since 2008. World GDP is expected to advance 3.5% in 2017 – its best year since 2011 – and 3.7% in 2018.

Taken together, this should help boost exports and global trade even further as more countries have the capital and demand to make purchases on the world market.

Bolstered by a weaker US Dollar, exports by American firms hit a three-year high in August, the Commerce Department reported this month. Exports rose to nearly $200 billion, the highest level since December 2014. 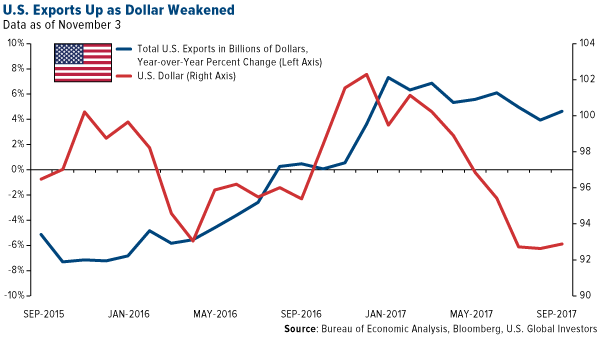 As further proof that the global economy is humming along, S&P 500 Index companies with greater exposure to foreign markets, especially Europe, saw higher revenue and earnings growth in the third quarter than those companies whose business is more focused domestically.

According to FacSet data, revenue grew 10% year-over-year for firms that generated 50% or more of their sales outside the US, compared to only 4.2% for firms whose sales were conducted mostly within the US The difference was even greater for earnings growth – 13.4% for S&P 500 companies with strong foreign exposure, 2.3% for companies with less exposure. 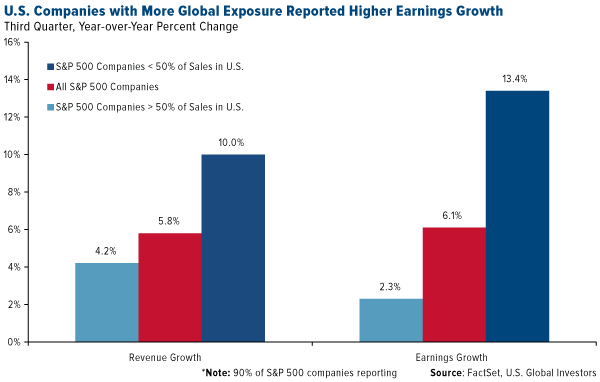 "Overall, 11 of the 30 companies in the DJIA provided revenue growth numbers for Europe for the third quarter. Of these 11 companies, nine reported year-over-year growth in revenues.

With 95% of S&P 500 companies having reported earnings for the third quarter, nearly three quarters have logged earnings per share (EPS) that are above the five-year average.

The US isn't the only economy that's had a standout quarter. According to Thomson Reuters data, 65% of companies in the MSCI Europe Index have beaten third-quarter expectations, with overall year-over-year earnings growth standing at nearly 10%.

As you're likely aware, it's been one year since the US election, and since then the market has surged more than 21% on improved global growth, higher corporate earnings and hopes that President Trump's pro-growth agenda of tax reform and deregulation will improve business conditions in the US In the past 12 months, there have been nearly three times as many weeks posting market gains above 1% than those with losses below negative 1%. This makes it one of the most profitable markets to have invested in for many years. 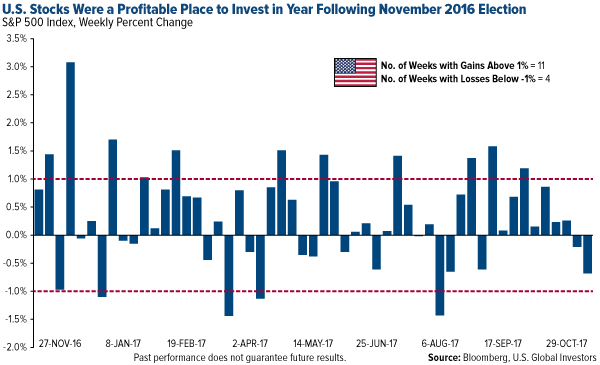 So where does the Trump rally rank? Looking at the 12 months following every November presidential election since 1950, LPL Research found that the bull run we've seen under Trump ranks fifth place, following Presidents Bush Sr. in 1988; Obama in 2012; Kennedy in 1960 and, in first place, Clinton in 1996, with gains climbing to nearly 32%.

Before year's end, we could see prices appreciate even more as investors act on enthusiasm over tax reform.

This month the House approved $1.5 trillion in tax cuts that, if signed into law, would slash corporate taxes down from 35% to a much more competitive 20%. The bill is now in the Senate's court where hopefully it doesn't suffer the same fate as the failed Obamacare repeal-and-replace efforts.

Goldman Sachs analysts place the chances of tax reform being completed by early 2018 at 80% – encouraging for sure, but there are some tough challenges ahead. A handful of Republican Senators, including Jeff Flake (AZ) and Ron Johnson (WI), have already said they will not vote for the Senate bill as it's currently written.