END_OF_DOCUMENT_TOKEN_TO_BE_REPLACED

"Some of the head winds the US economy faced in previous years," Mr.Powell assured the assembled, "have turned into tail winds."

Global growth is on the bounce.

US unemployment rests at 17-year lows.

The economy will soon feel the spur of new federal spending.

Let us not forget about the tax cuts.

Powell is even concerned that gusting tail winds could spread the brush fires of growth...and "overheat" the economy.

To moderate the winds, to keep growth at a Goldilocks simmer...Powell seemed to allow the possibility of four rate hikes this year.

But does weatherman Powell report the breeze accurately?

Or is he facing the wrong direction...mistaking head winds for tail winds?

For possible answers, let us turn from the economic mainstream...and consider the "true money supply," or TMS...

Economists of the "Austrian School" crafted the metric in the 1970s and '80s.

The true money supply consists of cash...demand deposits (ie, checking accounts) at banks and savings and loans...and government deposits at banks and the Federal Reserve.

As Austrian economist Frank Shostak once explained in Strategic Intelligence:

"We take the figures published by the Federal Reserve and remove some items that shouldn't be there and add some items that should. For instance, if you look at M2, they include money market funds. (A money market fund is an investment in income-paying securities. It's not really money in the sense that money sitting in your checking account is.) What we're doing is removing all the transactions of lending and credit, and we only add those items that are pure money, which are claim transactions, like demand deposits."

This TMS business is complicated...and we refer you to Professor Google if its inner sorcery interests you.

Here our tale acquires its point...

The Fed is scheduled to reduce its balance sheet $420 billion this year.

If the TMS is a reliable weather vane...plunging money supply could soon become a howling head wind.

"It's easy to see that the growth of TMS could grind to a halt and even begin to contract later this year."

Here, the variable winds of the "true money supply" since 2003: 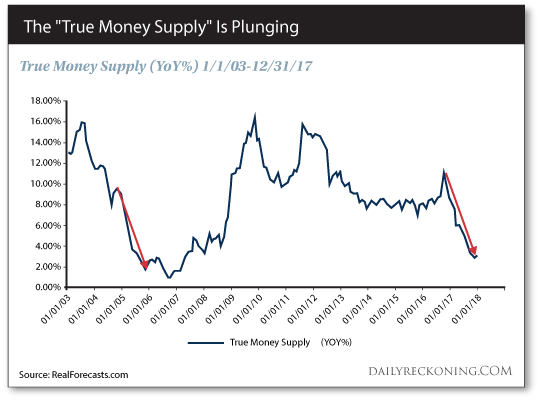 Note the red arrow to the right.

Does it not align with the arrow on the left...that preceded the 2008 financial crisis?

"What is of great interest is that the recent deceleration of monetary growth (the second red arrow) almost exactly matches in extent and rapidity the monetary deceleration (the first red arrow) that immediately preceded the financial crisis of 2007-08."

But perhaps Salerno chases a shadow, a phantom, a chance correlation trussed up as evidence.

No, Salerno insists, he stands on solid bedrock, his eyes glued to fact:

"The qualitative relationship between TMS growth, credit crisis and recession has been remarkably clear since 1978."

He hauls forth the following evidence to argue his case: 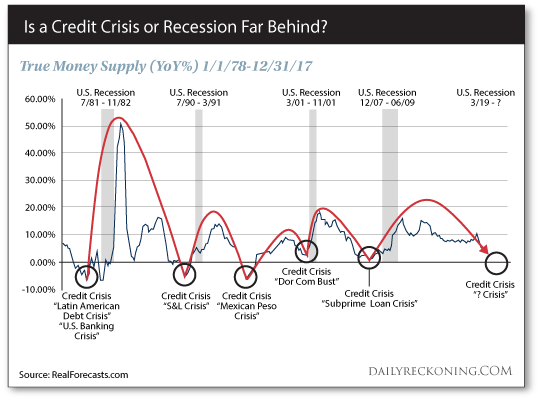 Recession or credit crisis followed previous occasions when the true money supply decelerated to this extent.

Not to the day or month, of course.

But economies run to a lagging schedule.

We now find the true money supply in similar decline.

Does the foregoing mean recession – or credit crisis – will soon be upon us?

The top-right line in the chart suggests a recession starting next March.

We take any economic forecast with truckloads of table salt – and the further out the forecast, the heavier the dose.

So don't put us down for recession just yet.

But given its record, this true money supply rates a serious consideration.

Jerome Powell believes the winds are at his back.

But if the true money supply is the head wind we suspect it could be...

Powell could soon be heading into the teeth of a gale...