END_OF_DOCUMENT_TOKEN_TO_BE_REPLACED

RIGHT NOW the financial markets are serving up more static than an AM radio station along some forlorn stretch of Route 66, writes Eric Fry for the Daily Reckoning.

For several months, the major trend in the financial markets has been no trend at all. Just static. During the last four months, for example, the Dow Jones Industrial Average has delivered an astonishingly large number of 100-point days. But on a net basis, the Dow hasn't budged over that timeframe.

Since July 27th, the Dow has traded up or down more than 100 points on two out of every three trading days. Furthermore, many of those 100-point days were actually 200-, 300- or 400-point trading days! (As recently as June and July, hundred-point days were relatively rare — only about one day in three).

Despite all those gut-wrenching 100-point days, however, the Dow is still hanging around the 12,000 level — right where it was at the end of July. Clearly, volatility is a bull market, even if stocks are not.

The Eurozone probably deserves most of the blame for this fruitless, directionless volatility. One moment, the Euro seems destined to blow apart. The next moment, the European leadership announces some sort of crowd-pleasing rescue effort...and then a few moments after that, the crowd's pleasure dissipates as the crowd begins to doubt that the latest rescue plan will actually rescue anything. Lots of static...no clear signals.

The only clear signals that seem to be making their way through the static are the one's we'd rather not hear — kind of like the Mariachi music that sometimes pierces the static along Route 66.

For starters, Emerging Market stocks have been sliding for months — a phenomenon that often portends slowing economic growth worldwide. 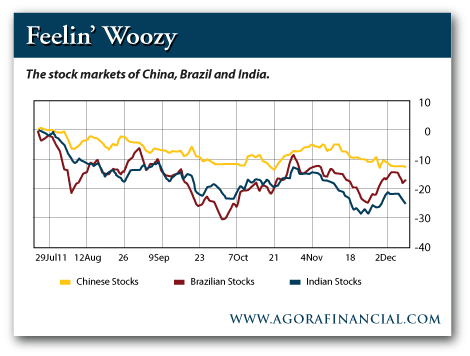 Additionally, most of the recent economic reports from around the globe suggest the Emerging Markets may be on to something. In other words, they aren't falling for nuthin'.

Meanwhile, Reuters continues, "The final Eurozone manufacturing PMI was confirmed at 46.4, its weakest level in two years, with factory activity in both of its biggest economies, Germany and France, weakening. The UK factory PMI fell to 47.6 in November, its lowest since June 2009, further evidence that Britain's economy is in dangerous territory."

So far, the US economy — like its stock market — has continued plodding along. Nothing great, but nothing horrible either. That's good news, relatively speaking. But resilient is not the same thing as bullet-proof. And as colleague Dan Amoss recently observed, the resilient US economy may be succumbing to the sluggish conditions that surround it.

"The Economic Cycle Research Institute (ECRI), one of the few reliable economic forecasting firms, still shows that the US economy is slowing from its prior growth rate," Dan observes. "The nearby chart shows the ECRI Weekly Leading Index (in blue, left scale) and the growth rate of this index (in red, right scale)." 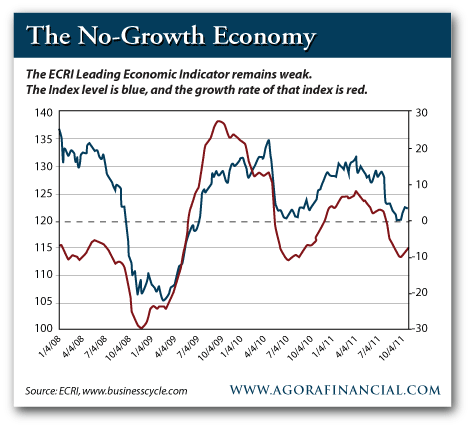 "Since the end of October, the WLI growth rate has stopped dropping quite so rapidly, from -10% to a recent -7%. One might describe the US economy as resilient, yet this resilience in US economic data isn't consistent with what we see from the rest of the global economy. Something doesn't add up."