END_OF_DOCUMENT_TOKEN_TO_BE_REPLACED

Technical of the Silver Price chart shows there's room to run yet...

First up, the chart just below shows the net positioning in silver futures of the more mercenary of the traders the CFTC classes as "commercial" – the Swap Dealers. What this particular chart shows is that with silver literally at resistance (silver was $19.79 on Tuesday last week, the cut-off date for the Commitment of Traders report), Comex Swap Dealers were essentially flat the metal. 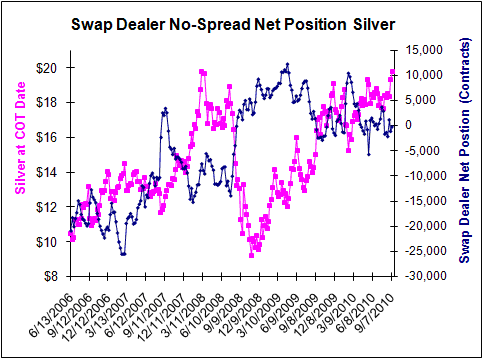 To be precise, the Swap Dealers reported being net short silver 194 contracts, which is close to nothing. In recent memory, we can point to at least two separate occasions where the Swap Dealers stepped in to cap silver either at critical near breakouts or just ahead of a big sell-down, the most recent of which was in the May 18 COT report, where they added over 5,000 contracts on the short side with silver then nudging $19.00.

The other came in July of 2008 during the summer massacre.

Now, contrast the flat positioning by the Swap Dealers with those "commercials" (meaning the industry's supply-side players) that the CFTC classes as Producer/Merchants. 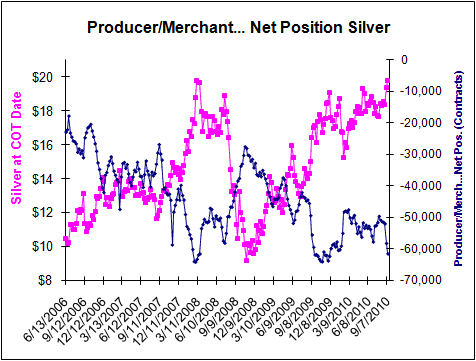 This is the category which we think includes the largest silver and Gold Bullion banks. And last week's COT report shows that the commercials added 3,323 contracts to show 61,604 contracts net short silver. As we might expect with silver literally at its technical resistance, the industry players are near record net short. But as of this latest report, the Producer/Merchants are essentially all of the commercial net short positioning on the Comex futures exchange for silver.

To quantify the Producer/Merchant commercial positioning, their highest nominal net short positioning in our records came on 26 Feb. 2008 at 64,216 contracts net short as silver was marching higher through $18.76 then (about 2,600 contracts more than now). But overall, the total open interest in all silver contracts then was much higher – at 173,340 contracts (versus 139,522 now).

Can silver rally or break out despite heavy selling opposition by the Producer/Merchant commercials? Yep, it surely can and it certainly has in the recent past. One good look at the graph above will show that when the Producer/Merchants take a heavy short stand (the blue line low on the graph) they are usually "right" and silver usually retreats shortly afterward. But when they are "wrong" they can be spectacularly wrong in monumental percentages!

Note the action in 2007 as the most glaring example. And just for fun, see if you can spot a contrast in that example between the Producer/Merchants and the Swap Dealers. Hint: That is partly why we call the Swap Dealers the more mercenary of the commercial traders...

Moving on, and finally for today's brief look at some of our charts, we thought this next picture worth mentioning. The chart is self-explanatory, but we won't bother to post links to the recent stories saying that silver is "overbought". 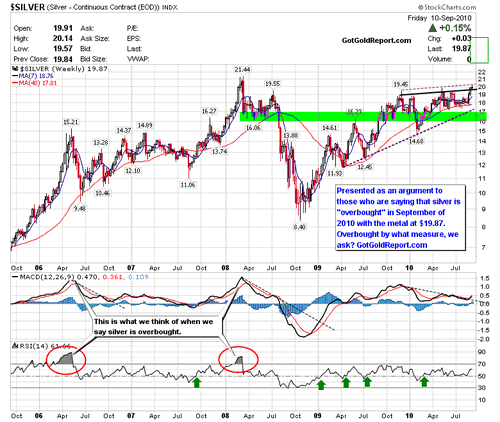 We will just point to the chart below and ask, "By what measure?"