END_OF_DOCUMENT_TOKEN_TO_BE_REPLACED

EXCHANGE-TRADED FUND investors are showing a preference for silver over gold lately, writes Gene Arensberg from Houston, Texas in his Got Gold Report for the Gold Newsletter.

At least, we are seeing more buying than selling pressure in the silver ETFs while Gold ETF money flow is flat – and has been for a year.

We think it could be pointing to an opportunity looking ahead. Bottom line? We remain long gold and silver here at the Got Gold Report, after re-entering the gold market two weeks ago. 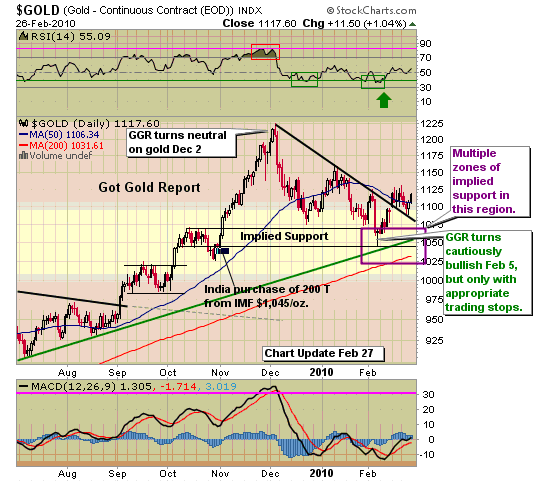 Please Note: This offering of the Got Gold Report was originally filed Sunday, February 28, and delivered to Gold Newsletter subscribers shortly afterwards. For more information or to subscribe visit the Gold Newsletter home page.

Meantime, the SPDR Gold Shares Trust (GLD), by far the largest gold exchange traded fund, reported a very small reduction of 0.61 tonnes to 1,106.99 tonnes of gold bars held by a custodian in London for last week. As of the Friday, February 26 close, GLD's metal holdings were worth $39.4 billion.

The chart just below shows GLD's metal holdings relative to the price of gold for about the last year. 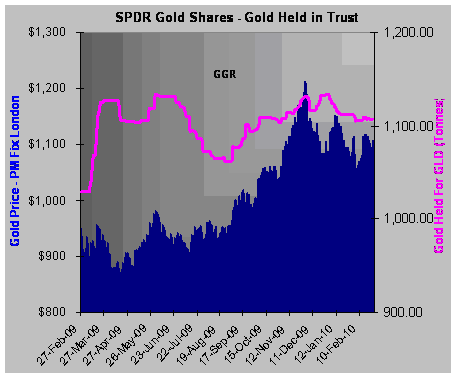 To a technical analyst, it resembles a triangular consolidation. Putting the last year of GLD metal holdings in context, the next chart goes back four years to February of 2006. 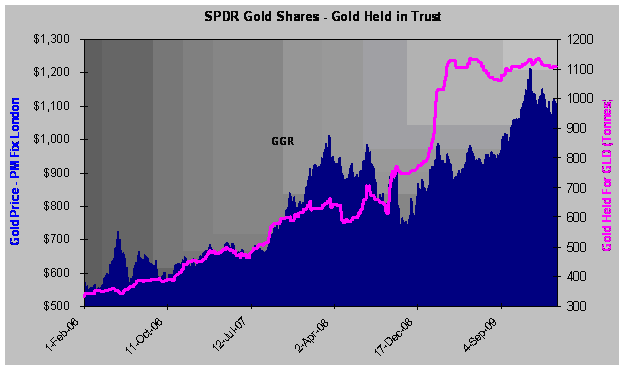 Notice, however, that all or most all of the increases in metal holdings for GLD occurred by March of 2009 with gold at or below the $950s. (For reference, GLD first reported holding more than 1,100 tonnes on March 19, 2009 when it reported 1,103.29 tonnes with gold then trading at $956.50). Since then, and taking a rather broad view, buying and selling pressure for shares of the Gold ETF have been more or less balanced as reflected in a much narrower range of metal additions and reductions.

We want to call attention to the very substantial difference in recent metal holdings level for the largest Gold ETF and the largest silver ETF. It may be pointing to an opportunity as investors are converting Gold ETFs into silver ETFs at the margin, perhaps taking advantage of higher gold/silver price ratios.

The iShares COMEX Gold Trust (IAU), reported a reduction of 0.76 tonnes to show 76.68 tonnes of gold held in Comex warehouses. And all five of the Gold ETFs sponsored by the World Gold Council collectively recorded a very small decline of 1.68 tonnes of gold metal, to a combined 1,293.44 tonnes (41,585,270 ounces) worth about $46.1 billion as of Friday's close.

Metal holdings for BlackRock's iShares Silver Trust (SLV) increased last week by 30.51 tonnes to a reported 9,476.91 tonnes of 1,000-ounce allocated silver bar inventory. As of the Friday close, the largest ETF silver hoard in the world was worth $4.9 billion or about 10.7% of the value of the largest Gold ETF.

The chart just below shows the changes in allocated silver metal holdings for SLV over about the last year. Please compare this graph to the one-year version for GLD above. 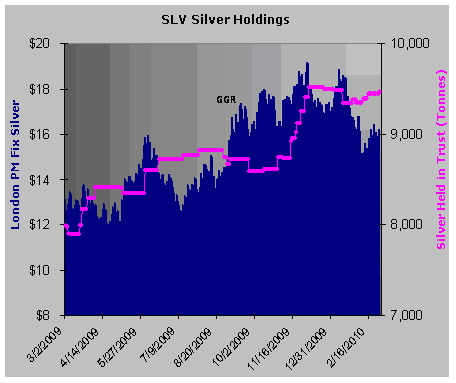 Like GLD, the authorized market participants for SLV add silver (and increase the number of shares in the trading float) in response to more buying pressure than selling pressure and vice versa.

In contrast to GLD, we note consistently more buying than selling pressure for the largest silver ETF over the past year, even as silver prices trended higher on balance.

Below is a graph showing the additions of metal held for SLV since its April, 2006 inception – roughly the same period as the longer-term chart of GLD above for comparison. 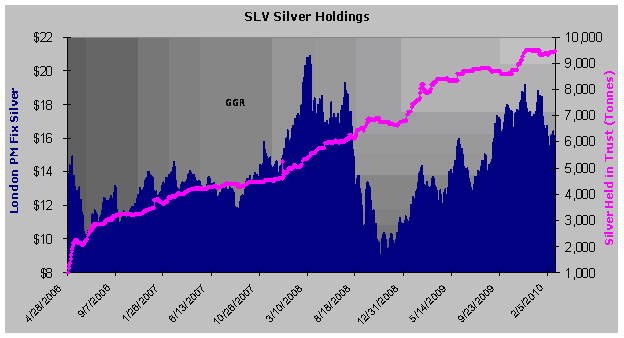 Believe it or not, silver prices are not far from unchanged since SLV got underway in 2006. What HAS changed is that over 9,000 tonnes of the world's available bar silver in London has been removed from the market over the period.

We are of the firm opinion that silver ETFs are closing in on a supply inflection point, but that's a subject for a future report. Clearly, for now, there has been consistently more buying than selling pressure for the world's largest silver ETF, with only minor pauses in investor accumulation since SLV first began trading four years ago.

That continued popularity comes despite the brutal, panic-rush to liquidity in Q3 of 2008 which is the dominant feature of the SLV trading record above.

To repeat: There has not been material positive money flow for the largest Gold ETF for about a year now. We expect that to change in the near future as this higher price region for gold is further digested and accepted by the collective global market. Although anything is possible over the short term, we seriously doubt that investors will gain substantially more confidence in the world's ailing, debt-strangled, policy abused and overly inflated fiat paper promises – or that investors will suddenly lose confidence in the only universally accepted store of wealth and value for over four millennia.

We also note that the Gold/Silver Ratio is still quite high historically speaking, and some investors may be taking advantage of the higher gold price to convert some Gold ETF holdings into silver ETFs.

If we stand back from the day-to-day metals price battlefield for a minute and take a wide-angled view, so to speak, what might this divergence be hinting to us? Well...

Then it makes perfect sense that we have seen consistently more buying than selling pressure for the largest silver ETF even as Gold ETFs have treaded water relatively speaking.

In the simplest terms, investors want somewhere to park some of their wealth in something that is backed by something tangible and out of their country's debased fiat paper unit of exchange. The obvious conclusion is that investors see silver as a relative value compared to gold presently and it wouldn't surprise us in the least if that were to continue over time – if the world more or less holds it together.

Want to Buy Gold outright, not through a trust fund, and deal it 24/7...rather than only during stock-market hours...at a price of your choosing, rather than your dealer's quote? Start with a free gram of gold at BullionVault now...