END_OF_DOCUMENT_TOKEN_TO_BE_REPLACED

Short-term...temporarily even...an effort to suppress prices could succeed. But forever?

ISN'T THAT interesting? asks Gene Arensberg in his GotGoldReport.

Silver Prices have challenged new 30-year nominal highs, yet the largest commercial traders in silver futures are apparently not willing to take on much higher net short positioning. 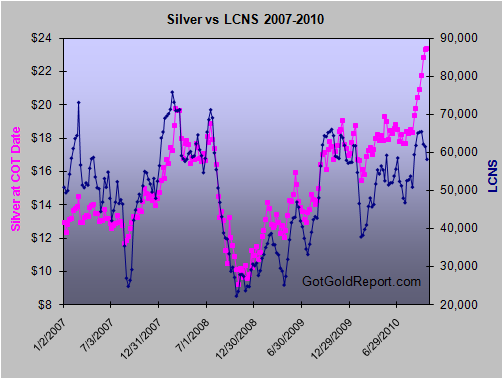 Why aren't the largest futures hedgers and short sellers willing to really pile on the short side of silver futures? What signals do they see...and what is keeping them from selling the heck out of this $5.00-plus rally since the August consolidation breakout?

"I believe that there have been repeated attempts to influence prices in the silver markets. There have been fraudulent efforts to persuade and deviously control that price. Based on what I have been told by members of the public, and reviewed in publicly available documents, I believe violations to the Commodity Exchange Act (CEA) have taken place in silver markets and that any such violation of the law in this regard should be prosecuted."

The CFTC regulator's full statement is available here. And has Commissioner Chilton opened a window for us? Could it be that silver is not being hammered in the futures markets on the short side because traders that have used their ability to game the system in the past are now under a CFTC microscope?

In which case, the futures game may have changed. But...

In truth we do not know with certainty which (if any) of the scenarios above are in play, but we do know that silver has not been trading anything like it "normally" does since at least the end of September.

Just below is our own chart, which we shared with subscribers in our COT Flash Report on Sunday, October 24. It shows the relative net short positioning for silver for the traders the CFTC classes as "commercial" in the legacy commitments of traders (COT) reports. 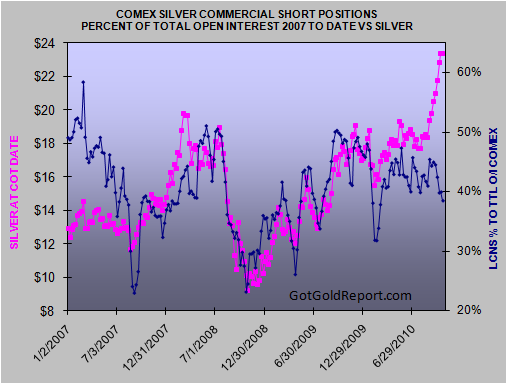 In the three reporting weeks since September 28, the traders the CFTC classes as commercial collectively reduced their net short positioning from 65,413 to some 58,150 contracts net short silver.

Why is that not "normal" comparatively speaking? Because it occurred as the price of silver advanced from $21.74 to as high as $24.90, then settled Tuesday, October 19 at $23.36. So all told, over the past seven trading weeks, the relative net short positioning of the largest commercial hedgers and short sellers has actually declined from 45.4% of all contracts open to 38.5%.

The unusual part is that the commercial hedgers and short sellers reduced their net short positioning on a material increase in the price of silver. In the past that would be considered strongly unusual. Hedgers in retreat? Hedgers NOT selling into a 30-year price high? A historic change is underway in the futures markets, friends. We are witness to it right now.

But the idea that silver is now rising merely because of increased scrutiny by regulators on the short sellers is neither comforting, nor appealing, but we sincerely doubt that is solely the reason that silver has found a bid of late.

We are of the firm opinion that silver is not rising merely because of regulator's newly found desire to promote "fair" futures markets. Indeed we believe that if there is any influence from the CFTC investigation into the silver futures markets, or increased scrutiny, or whatever, that influence is at best minimal, and more likely coincident to what is happening in the much larger and much less regulated physical markets.

To be sure, we here at GotGoldReport lament the unfair advantage in the futures markets enjoyed by traders to whom the CFTC grants "bona fide hedger" status. This allows a few elite traders access to larger positioning than their long-side opponents. Nor does it take ownership of a tin-foil hat to have noticed multiple bone-crunching sell raids by those "usual suspects" in the past. All long-time traders are certainly aware of them. All long-timers have learned to survive them using one or another money management method (stops, options, nimble trading, etc.).

However, as we have said so many times in the past, one can manipulate the price of something temporarily for short periods of time – if given enough firepower, and given the "right" execution of the trading, But nothing and no one can manipulate the global market price of something – not bullion banks, nor even central banks can argue with the supply/demand/liquidity equilibrium of a global market for any length of time and certainly not indefinitely.

Our view: We believe there is a tectonic shift underway for silver. A shift of historic and generational proportions that is only just now starting to surface in a material way. We believe that global public demand for precious silver is once again returning the metal to its historic role as money – alongside its rarer cousin gold. We believe that the recent absence of concerted short selling is more likely a logical market reaction by hedgers and short sellers to the reality of much higher demand and the realization that existing and available supplies may not be sufficient to satisfy that burgeoning demand at current pricing.

If our view is correct, then it really doesn't matter if the CFTC or any other regulator is looking harder at the positioning of futures traders. If our view is correct, then the market price of silver will find its own supply/demand/liquidity equilibrium, whether or not hedgers and short sellers sell a few hundred million more ounces of the stuff in paper contracts in New York.

Would it be better if the futures markets were played on a more level playing field? One where both sides of the battlefield had the exact same rules and size limits? Where one side of the action didn't have access to many times the number of contracts – access to more "ammunition" than the other side does? Sure, certainly it would. No question about it. It might cut down on the short-term blood lettings from time to time. Maybe. But, will that make any difference in the long-term Silver Price...?

No, not really. Futures contracts answer to real demand by the population for silver, not the opposite.

We believe the story has been considerably different for gold, which is held by governments as a reserve-asset and thus has been subject to an unseen hand of "currency management" from time to time in the past, but that is another story for another time. Governments no longer hold silver – and they have all but stopped dishoarding the silver they did have. Governments have stopped supplying the silver that artificially kept the price unreasonably low for decades – and the markets are discovering that now.