END_OF_DOCUMENT_TOKEN_TO_BE_REPLACED

Record gold price also deters new buying...
GOLD's third record year in a row for US Dollar prices saw private investment back off from buying physical bullion in December, while silver's continued price rebound spurred the most selling on record, writes Adrian Ash at BullionVault.
The Gold Investor Index measures the balance of net buyers over net sellers as a proportion of all users here at BullionVault, the UK fintech now caring for $3.8 billion of securely vaulted and insured precious metal (£3.2bn, €3.6bn) for more than 100,000 customers across 175 countries.
The index in December slipped to an 11-month low of 53.3, while the Silver Investor Index gave a series-record low of 47.5 – signalling more sellers than buyers across the month with only its 6th reading below 50.0 since 2012.
The Silver Investor Index set a record high of 75.1 in March 2020, when the first-wave Covid Crisis saw bullion prices sink at the fastest pace since summer 2008.
In the last 3 months silver prices have risen by nearly one-third against the Dollar and gained well over 20% priced in other currencies. 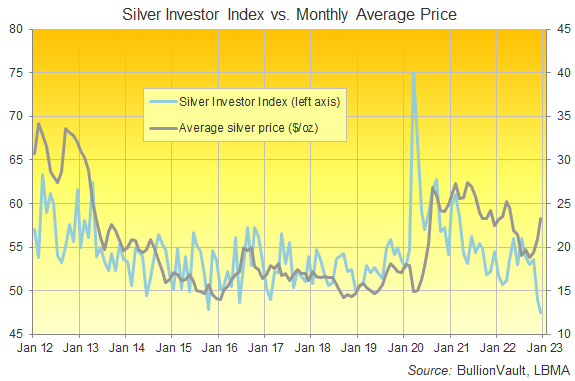 Gold last year averaged a Dollar price of $1800, its third new high in a row, and it has already hit new 7-month Dollar highs in 2023 today.
Euro gold prices are meantime very much at the top of the last 6 months' range above €1740, and the UK gold price in Pounds per ounce touched £1,540 on Tuesday morning – a level beaten on only 6 trading days in history – following weak manufacturing data and new forecasts for economic recession.
So with global stock markets jumping on news of China abandoning its zero Covid policy despite the virus running amok, caution plus a little fear and doubt across wider financial markets mean gold and silver have begun 2023 with a typical New Year surge, attracting speculative inflows as traders see weak growth spurring a retreat in interest-rate hikes sooner rather than later despite high inflation, and all against a worsening geopolitical outlook.
Precious metals offer an obvious trade for 2023's stagflation consensus, because historically they have tended to do best when other assets do poorly. Yet only precious-metal derivatives are really seeing any inflows so far, with physical bullion buyers and ETF holdings both backing off into the start of New Year rather than chasing gold and silver's steep price jumps higher.
As for this pundit's forecasts, silver enjoyed all-time high consumer and industrial demand last year, and while 2023 looks set to extend that record thanks to green-energy tech led by solar, its price still remains more than 50% below its historic peak in Dollar terms.
Gold meanwhile defied the steepest rise in bond yields since at least WW2 last year thanks to existing investors sitting tight rather than selling out and Asian consumer demand returning to pre-Covid levels but at prices $500 per ounce higher. So it seems more than likely that any dips in the gold price will find strong support from investors and households wanting to spread risk after the worst year in living memory for equity-bond portfolios.
After all, silver and gold were the best-performing tradable assets outside energy commodities last year. So to pick one example, and even before inflation in 2022, total returns on a UK portfolio holding 60% in shares and 40% in bonds would have lost an investor 11 per cent. Putting one-tenth into gold and another tenth into silver at the start of the year would have cut that loss to 6.4 per cent according to BullionVault analysis.
Last month's price rise saw the Gold Investor Index – a unique measure of how many people are buying gold versus how many sell – slip to an 11-month low of 53.3.
The Silver Investor Index meanwhile gave a series-record low of 47.5 – signalling more buyers than sellers across the month for only the 6th time since 2012 with a reading below 50.
Our silver index set a record high of 75.1 in March 2020, when the first-wave Covid Crisis saw bullion prices sink at the fastest pace since summer 2008. Whereas in the last 3 months silver prices have risen by nearly one-third against the Dollar and gained well over 20% priced in other currencies including the Pound.
Silver this December also saw more selling than buying by weight, with net outflows of 10 tonnes marking the heaviest liquidation among BullionVault users since March 2022, when Russia's invasion of Ukraine saw month-average prices spike – jumping 10.5% in Sterling terms – to spur net selling of 14 tonnes.
Even so, last month's outflow only equated to 0.8% of client holdings, leaving the total quantity of silver bullion stored and insured in each user's choice of London, Singapore, Toronto or (most popular) Zurich at a new year-end record of 1,252 tonnes – worth £800 million today – after peaking at a record 1,276 tonnes in October.
Gold holdings meantime rose by 0.2% in December to set a fresh all-time high above 48.1 tonnes, more gold than most central banks own and now worth £2.3 billion.
Will light demand continue in gold? Will profit-taking continue in silver? Gold and silver prices typically rise in the New Year and January 2023 is proving no exception so far.
Further ahead however, that stagflationary consensus will only grow stronger as weaker data crash into the rising cost of living. At some point, people currently outside the bullion market will want to do something about it.
Attachments: