END_OF_DOCUMENT_TOKEN_TO_BE_REPLACED

IF YOU didn't get to watch last month's LBMA webinar on silver, then you haven't missed out, writes Adrian Ash at BullionVault.

You can replay that discussion at your leisure here.

You can also keep reading below for the big numbers, big ideas and big forecasts shared by the expert panel.

Bottom line? The future looks bright for silver. Supply is lagging demand and it's set to keep lagging for years to come.

But that doesn't, however, mean the price is going to surge or hold higher ground anytime soon. Not according to experts who forecast this kind of stuff for a living.

First up? Demand for things made of silver has never been stronger than in 2022...

...reaching new all-time records across each sector this year...

...from silver bracelets to teaspoons, US Eagles to Canadian Maple Leaf coins, fine mesh for catalysts in the chemicals industry, paste for making solar panels, and contacts in electricals and electronics. 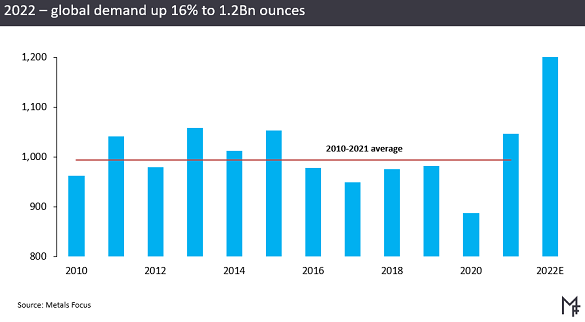 Says the data gathered and compiled by Metals Focus, the market-leading consultancy for analyzing supply and demand in precious.

Philip Newman, sharing these figures on the LBMA webinar last week, used slides from the presentation he gave in November to the USA's Silver Institute.

(Hence the million and billion Troy ounces in his numbers, rather than the increasingly more common metric tonnes used this side of the Atlantic as the world already does when talking about gold.)

At that dinner in New York, Philip had updated Metals Focus' 2022 estimates from their April report.

Their forecast this spring had predicted a 5% rise in overall silver-product demand, reaching a new all-time record above 1.1 billon ounces.

...blowing past their spring forecast, and also showing that this surge is far from just a 'post Covid' catch up.

The big drivers of this jump?

Over half of silver's end-use demand comes from industrial and technological products. Leading that now, and far into the future, are the 'green energy' industries of solar-panel photovoltaics plus – as the car you drive goes from a dirty old fossil fuel engine to a hybrid or purely electric motor – the mountains of contacts and wires and switches needed in a brand-new auto today.

2022's energy-cost crisis has driven a sudden new focus on energy security among governments as well as cost-cutting plans by companies everywhere, and that's driven a fresh focus on PV solar energy, with global installations extending their run of successive new highs.

But for 2022 however, industrial use has accounted for only 1/6th of this year's steep growth in fabricated silver demand, he added.

So really driving that 16% jump in headline demand has been India – importing record quantities of silver this year, primarily for jewellery, coin and small bars – as well as small-bar and coin demand led by the USA, with Germany now in 3rd place behind India.

Is silver's industrial story misleading then? On the contrary, the long-term outlook for solar installations – plus the move to electric vehicles – in fact means that the growth in silver demand from those sectors has barely scratched the surface so far, Jon said.

Over on the other side of the ledger, meanwhile, new silver supplies from the mining industry are set to struggle according to Rhona O'Connell, a 4-decade veteran of precious-metals analysis now at international brokerage Stone X.

Why? Well for one thing, only 30% of silver mine supply comes from companies digging for the grey metal itself. The rest comes as by-product from copper, zinc, lead and gold mining...

...so the overall new mine supply is "inelastic" relative to silver prices. Because a jump (or drop) in silver's own market price simply won't drive more (or less) output.

On top of that, and looking at 2023, the massive inflation in energy costs now threatens a good chunk of copper and zinc processing by smelting plants, Rhona said, especially in Europe. And that drop in base-metal flows would very likely mean a drop in silver processing too as it feeds back into copper/lead/zinc mining output.

More importantly, there's been a real lack of capital intensity in the mining sector over the last few years, Rhona added. Balance sheets for miners across precious and especially base metals have been bolstered by investing less cash into finding or developing new resources. "There isn't any tangible growth coming through in the supply side," as she put it...

...and that's already shown up in silver mine supply growing only 2% in 2022 against that 16% jump in demand for silver products. 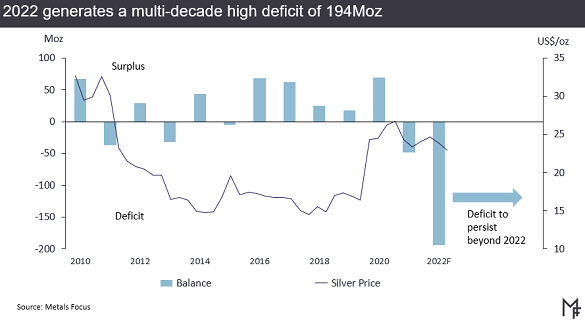 Philip and the Metals Focus team reckon that the silver market hasn't seen a deficit of supply versus demand as big as this year's in maybe 3 decades.

So where has 2022 found the metal needed to fill that gap?

Large investment stocks, led by ETF holdings, have shrunk dramatically this year. Those outflows have been eagerly snapped up by jewellers, mints and industrial fabricators, all needing more metal to make more product to meet the surge in demand.

So, despite the long-term outlook for demand growth and supply deficits, this year's heavy silver sales – out of ETFs and out of other vaulted investment holdings – have seen the price of silver fall almost 15% from last year's annual average above $25 per ounce...

The reason for investor selling? Rising interest rates for one. Silver bullion, like gold, doesn't pay any income. Indeed, it costs you a little bit to store and insure it. So a higher return on cash, even if it's still way below inflation, blows a strong headwind for silver.

So too does the now gloomy economic outlook. Silver finds half its end-use from industry and tech, and that must mean silver demand will weaken as the world's industrial and tech companies struggle with double-digit inflation, soaring energy costs, and – as a result – rising interest rates. Or so big investors have guessed. Never mind that on Metals Focus' expert data, demand has in fact jumped.

"But, but, but!" says the eager coin buyer, now paying $23 above spot for a 1-ounce coin containing $23 of silver today.

Fact is, however, that the mania for coins and small silver bars in 2022 – a year of new record-high demand – has poured money only into the gap between the price of silver and prices on the retailer's shelf. The market in silver itself hasn't seen any inflows. Quite the reverse, in fact, with London and New York stockpiles shrinking by nearly 25% altogether. 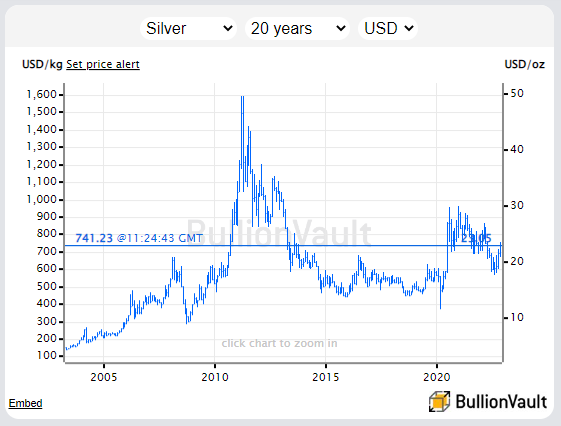 As you'll know from watching the webinar, the 3 experts agreed that for as long as central banks are looking to fight inflation by raising rates...and for as long as the narrative around global economic activity is downbeat thanks to those rate rises as well as the impact of today's dreadful inflation...then a strong and sustained rise in silver investment looks unlikely.

But look further out, to 2024 and into the rest of this decade, and that gap between supply and demand – even though it won't repeat this year's dramatic deficit – makes for a very bullish picture.

That's the expert take, at least. The wider bullion industry disagrees, predicting a 50% jump over the 12 months to next year's LBMA conference in October 2023.

As for private investors like you, we recently polled BullionVault users for their 2023 aims, concerns and outlook for silver as well as gold, platinum and palladium prices.