END_OF_DOCUMENT_TOKEN_TO_BE_REPLACED

How inflation, the Dollar and interest rates hit gold this year...
2022 has been a horrid year for investors in financial assets, writes Adrian Ash at BullionVault.
According to this chart in fact, the classic 'safe' portfolio of 60% in shares, 40% in bonds (still beloved as a model for personal finance advisors) has delivered the worst overall losses since the horror show of 2008. 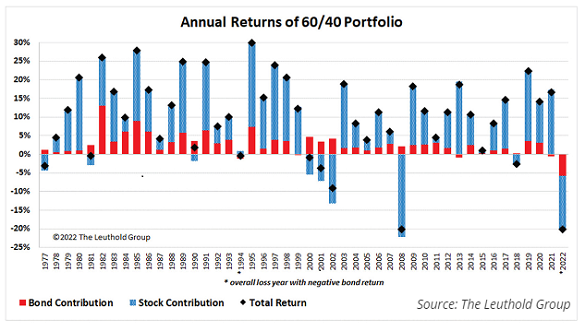 But wait! Other analysis says it's been worse than that...
...the ugliest year in at least 6 decades on one count...
...if not the worst since the Great Depression's very worst year of 1931.
With financial assets plummeting in value, then you might expect – all other things equal – gold bullion to have performed pretty well in 2022.
People tend to seek safety when stock markets sink. So getting into gold before the crisis hits has, in the past, tended to pay off.
Switching 10% of a 60:40 portfolio into gold at the end of the 20th Century, for instance, would have turned the following 5 years of DotCom Bust into a respectable 3.2% annualized gain according to our maths...
...and holding 10% in gold at the start of 2008 would have cut a US investor's overall 60:40 losses in half when that autumn's Lehmans Crash sent global stock markets into a tailspin.
This year, however, the Dollar price of gold has failed to rise. Because, well...because of the Dollar itself. 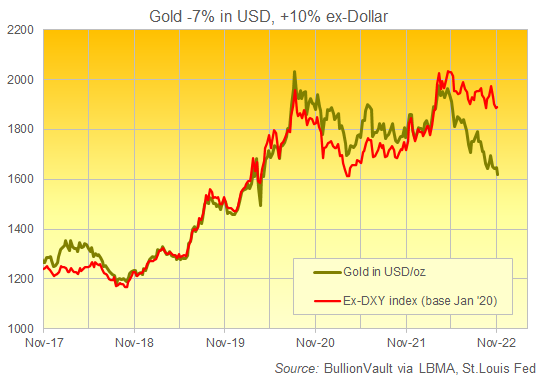 All financial markets are complex things, but the currency market is a mix of testosterone and technical analysis which only the foolhardy should try to play with leverage.
That's why UK spread-betting platforms – now forced by UK regulations to state in their advertising how well their clients make out, trying to bet on the financial markets – regularly admit that 70% and more of their customers wind up losing money.
Underpinning what can seem like chaos, however, the different level of interest rates offered by one currency versus another very often sets the underlying direction. And at the end of 2021, the US Federal Reserve got started raising the returns offered by the Dollar, while the rest of the developed world kept whistling past the graveyard of QE and zero rates.
Result? For the Dollar, it's meant 2-decade highs for the US currency on its trade-weighted index against the rest of the world's money. And so for our market of precious metals, the gold price has lost over 7% in 2022-to-date when viewed in Dollar terms. But it has risen by 10% and more when priced in the rest of the world's major currencies...
...because while the Fed has now hiked its key interest rate to 4.0%, the UK has only got to 3.0%...
...the 19-nation Eurozone only to 1.5%...
...and the Bank of Japan remains stuck at minus 0.1%.
Selling Yen or Euros or Sterling for Dollars, therefore, now looks like a no-brainer trade in hindsight. Cue 3-decade lows for the JPY and record lows for the GBP in USD terms. Cue new record-high gold prices for everyone outside the States.
Third, however, those rising Fed rates – plus the inevitable race to catch up now underway at rich-world central banks everywhere except Tokyo – mean that 2022 has seen bond prices sink together with shares, pulling the value of the 40% down as the 60% in stocks cratered.
That's because, as the Fed finally confessed last December, post-Covid inflation is not "transitory". So it needs tackling with both higher interest rates and a pause if not reversal of the last 15 years' QE bond buying (again, everywhere except Tokyo).
Those higher rates (plus the absence of central-bank bond buying) have pushed bond prices down, because if the Federal Reserve is going to set overnight interest rates at 4.00% per year, then the yield offered by a 1-year or 2-year or even 10-year bond better rise towards or above that level as well.
And that's a problem for gold. 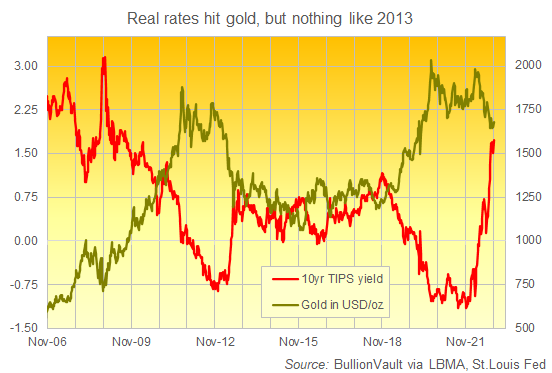 Gold pays you no interest. Indeed, properly stored and insured, it costs you ( a very modest sum) to own it.
Gold also however remains a monetary metal...
...bearing not only 5,000 years of monetary history in all ages and cultures but also a key role in central-bank reserves worldwide.
And because gold cannot be destroyed or inflated at will, it stands in stark contrast to all-too-destructible debt and all-too-inflatable government currency.
That's why gold prices are so very sensitive to the direction of interest rates, most especially expectations for the real interest rate – after you account for inflation – suggested by the yield on inflation-protected government bonds such as the US government's TIPS.
The relationship waxes and wanes, but across the 15 years ending last New Year, the week-to-week movement in 10-year TIPS yields showed a strongly negative correlation to Dollar gold.
Real rates down, gold up, and vice versa.
The typical correlation, stats fans, in fact read minus 0.73 from 2007 to 2021...
...where +1.0 would mean they moved perfectly in lockstep or -1.0 would mean they meant exactly opposite,
Across 2022, in contrast, that correlation (the 'r' coefficient to be exact) has averaged just minus 0.07...
...meaning that changes in real rates have shown next-to-no relationship overall with changes in the gold price from week-to-week.
Yes, the cost of borrowing has jumped, and it's jumped relative to the pace of inflation, too...rising more than twice as fast as the jump of 2013 which saw gold prices sink 25% inside 3 months.
This year, however, no crash. Just a 7% slide in US Dollar terms, and a 10% rise or better for most investors elsewhere.
Upshot? Gold has not 'done badly' despite inflation, war and the crash in world stock markets.
In truth, gold has done pretty well given the historic surge in both interest rates and the US Dollar.
But enough of 2022 (please!). What might all this mean for 2023...?
Thoughts, guesses and key things to watch coming soon.