END_OF_DOCUMENT_TOKEN_TO_BE_REPLACED

YOU MAY know me as the guy using weird planetary alignments while assigning proper fundamentals to the gold sector, writes Gary Tanashian in his Notes from the Rabbit Hole.

Recently I've even been doing the same with a somewhat subjective and philosophical view of gold as an important counterweight or insurance component to a sensible portfolio.

Or you may not know me at all.

If that is the case, let me introduce myself. My name is Gary and today I have a very simple post for your consideration.

We will look at the now compelling views of the Commitments of Traders (CoT) data for gold and silver.

Along with noting the poor fundamentals, I have been writing about positive contrarian sentiment in gold for many weeks now. That is because, well...sentiment has been contrarian positive!

While public opinion data have jumped around a bit, I think CoT is the ultimate sentiment indicator, because it shows how the primary movers of these markets are positioned. So let's get to it.

Friday's CFTC released the data as of Tuesday the 4th and on that day an already positive data set had become more so. For gold the upper green box I've drawn in shows a contrarian bullish configuration of net short large Speculators and net long Commercials. The lower green box shows last week's improvement with large Specs reducing longs and increasing shorts while Commercials did the opposite.

This is rare and bullish positioning. The red box is a very minor negative as the little guy (small Specs) remains net long, although he did press the short side last week.

The silver situation shows a hefty net long by Commercials and net short by large Specs and that is just fantastic. The more notable (than gold's) caveat here continues to be that the small Specs are still significantly net long (although they too faded just a bit last week).

So with the status of the little guy the only cause for any level of concern in the CoT data, let's take a look at the historical positioning of the all-important Commercial Hedgers (data courtesy of Sentimentrader, markups mine).

Gold just ticked Commercial net long by a teeny and that is something it has not done since 2002. This is the most constructive the CoT situation has been throughout the current bear market. As a side note, the chart makes a little fun of Gordon Brown who some would say singlehandedly launched the big gold bull market that began during the 1999-2001 period.

A caveat here is that CoT was very bullish for a long long time (as in, years) before the price caught on and the bull market became obvious. 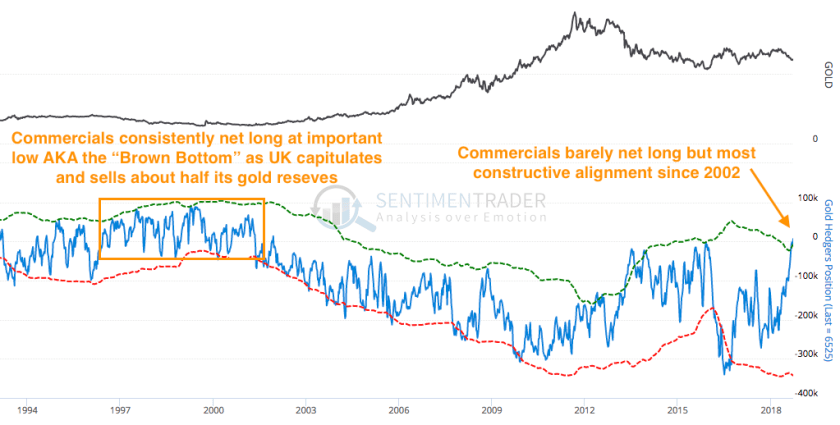 So with that thought in mind, we will still have to pay close attention to the proper fundamental backdrop because if it does not start to come in line there is every chance that this situation could take years as well (hey, if you want only pompoms there are plenty of cheerleaders out there at the ready).

Okay, I lied about keeping it simple. Here is the newly spiffed up Macrocosm of gold and gold sector fundamentals that actually matter for a prospective buyer. While the planet sizes are not perfect (Yield Curve & Confidence are as important as Gold/Stocks and the Economy) the larger the writing the more important the fundamental consideration. As for the smaller fry, Au/Currencies and Au/Commodities are actually pretty important.

Back on message and that message is the CoT. I saved the best for last. Silver's Commercial Hedgers have just spiked to a degree of net long not seen in the history of this data going back to 1993. Indeed, in all that time they had not been net long, only less net short at varying times.

Now considering that during rallies in the precious metals complex silver usually leads gold this would appear to be an important indication. So while we have been noting that the 2 Horsemen (Gold/Silver ratio & USD) have been riding as silver gets drubbed in gold terms, if a fire is to get lit under the precious metals or even the wider commodity complex, it would probably start with Silver. That spike in Commercial net longs may be a wick.

Bottom Line? Commitments of Traders data are not only not standing in the way of a precious metals rally, they are practically begging for one. It is best to have the fundamentals at your back when buying the precious metals and while September has a chance to bring some changes in that area they are not yet in place.

Still, I have started to buy some quality sector items, as noted for subscribers in the NFTRH real time Trade Log.