END_OF_DOCUMENT_TOKEN_TO_BE_REPLACED

The GOLD MARKET has been a money maker for lots of people, writes Brad Zigler at Hard Assets Investor.

Gold Bullion holders, owners of gold grantor trusts and Gold Mining stocks, and yes, even some people turning in their scrap gold to refiners.

Oddly, however, the stockholders of one such refiner have been losing lately. Last May, Money4Gold Holdings, Inc. (OTCBB: MFGD) – 'til then a development company – completed its acquisition of MGE Enterprises Corp., a company doing business under the name "MyGoldEnvelope.com".

MyGoldEnvelope, like many other firms of its type, makes heavy use of television to solicit owners of jewelry and scrap gold to sell their metal for its melt value. In the eight months since the acquisition, MyGoldEnvelope has expanded its operations outside the United States, to Canada, the United Kingdom, Ireland, Germany, Austria and Spain. Nearly two-thirds of the company's revenue is now generated outside its US home market.

As a marketing affiliate of the Republic Metals Corp., MyGoldEnvelope has collected a lot of gold, some of which is lining its principals' pockets. Gross profits ballooned 527% at last look, while selling, general and administrative expense rose 189%.

A lot of that expense comes in the form of stock-based compensation. MyGoldEnvelope uses it stock as currency for a lot of its dealings, including executive compensation. More accurately, however, the company allows its existing stockholders to be diluted by these compensation deals. 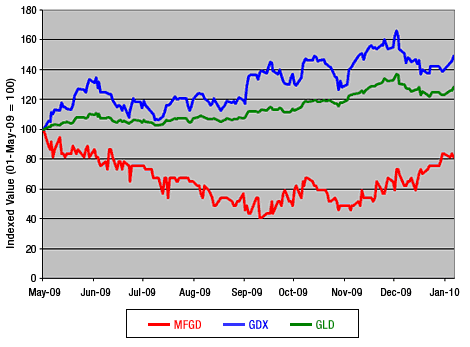 Family of the company's chief financial officer, in particular, were particularly busy in late 2009, converting preferred stock into 2.6 million common shares. In two such transactions alone, the company float expanded 1.5%, which may explain why the company's share price ratcheted downward at a time when revenues and Gold Prices were rising.

MFGD's stock price is now on the rebound, but is still under water. The stock's lost nearly 19% since last May, while straight gold owners and holders of the Market Vectors Gold Miners ETF enjoyed 28% and 49% percent gains, respectively.

MFGD shares are more volatile than either gold itself or the broad Gold Mining sector, which may give the stock the means to ultimately outperform. But its annual share price volatility is three times that of the GDX miners portfolio and nearly eight times as risky as gold itself or proxies such as the SDPR Gold Trust.

The potential for outperformance, of course, depends on how many dilution surprises lie ahead.