END_OF_DOCUMENT_TOKEN_TO_BE_REPLACED

Why crude oil prices could soon drop in half...

OIL has had a spectacular run the past two years, writes Jim Rickards in Addison Wiggin's Daily Reckoning.

OPEC members such as Iran and Iraq are notorious for cheating on OPEC quotas. The duopoly is more disciplined.

Yet, this kind of manipulation is a two-edged sword. Saudi Arabia and Russia have as much interest in not letting prices get too high as they do in not letting them get too low.

Right now oil prices are at the high end of the range the duopoly consider acceptable. Oil prices have nowhere to go but down once Saudi Arabia and Russia do some cheating of their own.

Investors who move now stand to reap huge gains as the duopoly drive prices lower in order to protect their market share, and once again shut-in the capacity of their competitors in the fracking industry. 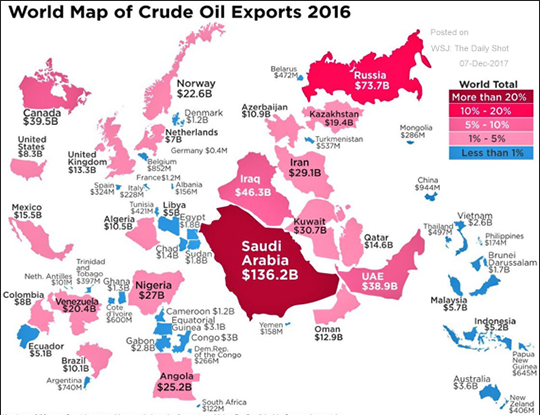 This infographic neatly illustrates the market dominance of the two oil producers.

Together, Saudi Arabia and Russia produce 21 million barrels of oil per day, over 25% of global output. The two countries can effectively set the global price of oil by increasing or decreasing output in tandem. The duopoly have proved more effective than OPEC at price targeting to hurt the fracking industry while not reducing their own revenues more than necessary.

Saudi Arabia and Russia together produce more than the next six major oil exporters combined, and those others have nowhere near the degree of coordination as the duopoly.

But the duopoly face a familiar dilemma that could confront any business.

On the one hand they like high prices and the revenue that goes with it;
On the other hand, high prices have two perils.

Obviously the duopoly would like higher prices, but this just encourages output from marginal producers especially those using hydraulic fracturing technology ("fracking") in places like the Permian Basin in Texas.

The solution to this dilemma is an optimization plan using linear programming. The way to model this is to ask: "What is an optimal price that destroys competition and maximizes revenue at the same time?"

Saudi Arabia ran this program in mid-2014. They concluded that the optimal price is $60 per barrel.

Of course, just because the computer says $60 does not mean you can stick the landing in the real world. There are many factors that go into oil pricing including geopolitics, central bank induced inflation or disinflation, and technical trading patterns.

In particular, once a price moves radically in a macro market there is a tendency to "overshoot"; something that is quite common in currency markets for example.

That said, Saudi Arabia set out in mid-2014 to crush the price of oil in order to destroy the fracking industry, which had emerged as a major competitive threat in 2011. The impact of the Saudi plan, and both the old and new trading ranges for oil are illustrated in the chart below:

Russia and Saudi Arabia work together today to keep the oil price ceiling at that $60 per barrel. With oil near the high end of that range, signs of slowing growth in China, and disinflation in the US, a decline in oil prices is highly likely. Because while the Saudi plan was effective, the fracking industry did not simply disappear.

In fact, the initial response of the frackers to the duopoly's play was to pump more oil. This additional output plus overshooting accounts for the dip in oil prices to the $30 per barrel level in early 2016.

The reason frackers produced more oil at lower prices was because of their financial constraints. The frackers had loaded up on leases, equipment and labor during the good times of $100 per barrel oil prior to 2014.

This was done with high leverage, which burdened the frackers with fixed interest and principal payments. Frackers did this in the belief that oil prices would stay above $70 per barrel. Some fracker cost structures ran as high as $130 per barrel to achieve profitability.

Many of those costs were fixed, at least in the short run. Pumping oil at a loss was better than not pumping at all because it generated some cash flow to pay interest while the frackers waited for better times.

The better times never came. Oil prices did bounce off the early 2016 lows and have stabilized closer to $45.00 per barrel, but that's still not high enough to support most of the frackers.

As the bankruptcies and debt restructurings piled up, a new wave of frackers entered the game. This new wave purchased assets from failing frackers at cents-on-the-Dollar and continued exploration and drilling with improved cost structures.

Some of the "new wave" frackers were actually from the original wave in 2011, but had managed to hold on either because they had piles of cash from their first financings, or because they had cut costs sufficiently to stay in the game for a while.

Saudi Arabia perceived the threat from the new wave of frackers and decided to go for the kill.

To do this, they enlisted Russia and created the duopoly. Now the stage is set for a new round of oil price declines and another bloodbath in the fracking fields.

What are my predictive analytic models telling us about the prospects for oil prices in 2018?

Right now the action nodes are telling us that energy prices are heading for a fall.

These new agreements basically reaffirm production limits that had been agreed earlier this year. Those agreements account for the run-up in the oil price since mid-2017.

Yet, the frackers have not gone away. Some are hanging by their fingernails with negative cash flow in the hope of higher prices. The duopoly are set to disappoint them.

Now that the duopoly and OPEC production quotas are set, the cheating can begin.

Perennial cheaters such as Iran and Iraq will be the first to overproduce. Venezuela's economy is in free fall, and it will certainly take the opportunity to overproduce also. Once supply increases, the duopoly will tag along with their own increases in order not to lose market share.

The frackers talk a good game when it comes to profitability, but they can't walk the walk. As the saying goes, "Fish gotta' swim, birds gotta' fly, and Texas wildcatters gotta' pump oil."

With the $60 per barrel cap firmly in place, and oil prices near that level, the price has nowhere to go but down. Prices near the top of the trading range will induce additional output.

This time the frackers won't get a reprieve because their bankers, stockholders, and bondholders won't allow it.

Losing money is not a sustainable business model.