END_OF_DOCUMENT_TOKEN_TO_BE_REPLACED

Quantitative easing in the US, UK and Eurozone...

BY END-JULY 2009, sales of new US Treasury bonds had already outstripped full-year sales in calendar 2008.

No, the Fed didn't simply hand that cash straight to the government. But it funded the national debt via the primary dealers who did buy the bonds...only to sell them onto the Fed...and thus stumped up 32% of the net cash flowing to Treasury from its bond sales (gross issuance minus maturities). Which was handy. Because the sums raised by personal taxation fell by one-fifth in the second quarter compared with April-to-June 2008. Federal spending rose 6.4% regardless. Money from nowhere sure helped.

What of the queasing itself, however? Quantitative Easing had a marked effect when the Fed announced its plan in mid-March. But easing longer-term rates with quantity hasn't yet worked as advertised. The market's looking queasy instead. 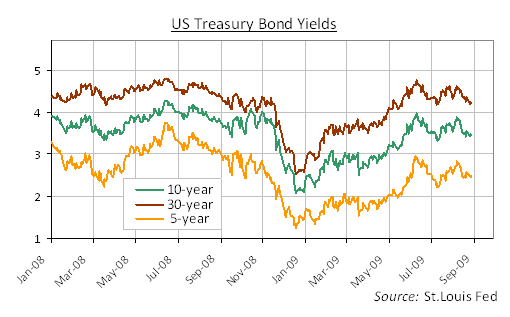 Bond yields are now higher from before the Fed's March announcement. More critically still for whatever "exit strategy" the central bank has in mind (or not...), bond holders seem keener to quit Treasuries than to buy them.

New Treasury bond sales this year have attracted bids for around 2.5 times as much debt as was on offer. The Fed's bond purchases, in contrast, have drawn offers of four times as much government debt as it wanted.

Compare and contrast with the Fed's buying of mortgage-backed bonds – the ostensible source of the entire financial crisis. There, the bid-cover ratio averages 1.8 times so far in 2009. And then, take a glance across the Atlantic... 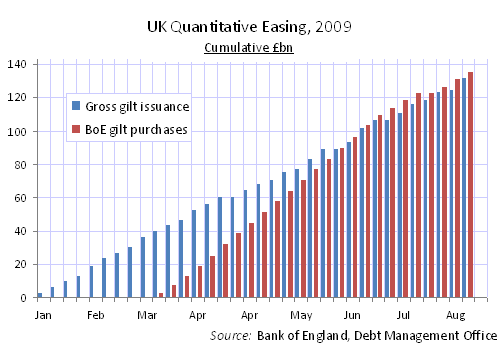 The Bank of England has now bought UK gilts equal to all of 2009's issuance to date.

Buying nearly £135bn-worth inside six months ($220bn), it's financed the equivalent of nearly a quarter of the UK's outstanding government debt. But that's not enough apparently. Because governor Mervyn King voted at the central bank's August meeting to raise the money-creation to £200bn....fully one-half of the outstanding gilt market.

Besides financing the state, however, this phenomenal queasing...greater by far than anything Weimar Germany tried...has seen residential mortgage rates charged to consumers rise 0.5% on average, hitting 4.4% this summer. Money-supply growth continues to boom for the financial sector, of course, but the money isn't trickling through to households. For non-financial businesses, the broad M4 money supply shrank in July by three pence in the Pound compared with a year before.

Bottom line? According to BCA Research, "It will likely be at least until the end of next year before growth conditions in the US and UK are robust enough to withstand a reduction in stimulus."

What all of this money-from-nowhere might mean for the Gold Price – that historic refuge from debt monetization and hyper-inflation – who can say? So far, it's doing little to kick-start a self-sustaining recovery, dumped instead into Anglo-America's fast-cratering state finances. But if a flight from queasy economies should slip into a panic, note that the Eurozone isn't safe from this flood of money ex nihilo either.

Back in June, the European Central Bank handed out 12-month loans to commercial banks at a cost of just 1% – its current overnight target rate. No, they're not financing government debt directly. But that flood of €442 billion, equal to well over half-a-trillion dollars, pulled down 12-month rates in the capital markets by pushing bond prices up. One-year German Bunds now yield just 0.40%. Cheap money parked in government debt wasn't perhaps what chief central-banker Jean-Claude Trichet intended. But the ECB will repeat its offer – unlimited quantities of 12-month loans, charged at just 1% – later this month.

Hence Monsieur Trichet's piece of pure Greenspanese in a speech on Friday:

"Note that an exit strategy is not identical to a particular course of action. Rather, it lays out a framework and set of principles to govern actions in the face of circumstances in whatever form they take."

Got that? Feeling queasy...?

"If there's an easier way to Buy Gold, I've yet to find it," says one BullionVault user. Learn why if you're Ready to Buy  Gold here...