END_OF_DOCUMENT_TOKEN_TO_BE_REPLACED

SO HERE'S a turn-up for the Gold Price, writes Adrian Ash at BullionVault.

Today saw the Gold Price rising after disappointment over new Quantitative Easing from the US Fed.

Maybe Ben Bernanke's much-awaited speech at the annual Jackson Hole central-banking symposium wasn't so disappointing after all. But if so, it fell a long way short of matching 2010's big promise. The financial media's first-rush response today was headlined "Bernanke: No more easing, for now". Ha!

So maybe the gold market's just got its mojo back. Or perhaps this week's anticipation – the same quanticipation we've seen for times this summer – merely put the Gold Price on hold, as the buying already in train took pause. 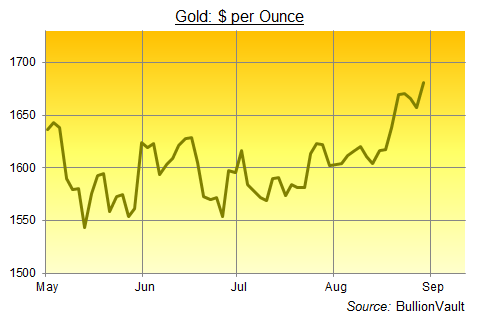 As you can see, the Gold Price hit a classic bout of the doldrums in summer 2012. And within that $100 trading range, you can see quanticipation – the anticipation of quantitative easing – blowing a hot breeze first this way and then that.

Starting in May, gold priced in Dollars has risen on any and every "hint" of fresh money printing in the US, only to slip back when the Fed then disappoints. "Will he? Won't he?" All financial markets have been trying to guess the answer. But you can most clearly see it in the price of gold – that most sensitive asset to monetary policy. Because Buying Gold is always a vote of "no confidence" in central banks. Selling it means you think the Fed has got on top of its job.

And today, post-Jackson Hole, gold has now done something it's failed to do every time previous this summer. It rose despite Ben Bernanke's damp squib of a speech. So perhaps the bullion market has finally shrugged its shoulders and accepted that – whatever the Fed says – it will choose to pull the big lever marked "More Money" sooner or later.

Market-timing be damned? Quanticipation might now be driving the Gold Price regardless of Fed jaw-boning.