END_OF_DOCUMENT_TOKEN_TO_BE_REPLACED

WHEN PRIVATE EQUITY financiers talk about "vintage", they aren't commenting on the Château Pétrus, write Alex Daley and Doug Hornig at Casey Research.

Each year's investments are referred to as vintages, with some being more highly drinkable than others. But now, some of the recent vintages look like they'll turn out to be little more than vinegar.

The world of private equity financing doesn't have high visibility, but it is big business behind the scenes. Unlike venture capital outfits – which provide startup money to very early-stage companies – those who play this game grab existing private companies, often through leveraged buyouts (LBOs).

Private equity investing has never been for the faint of heart. But investors continue to engage in it, because the payoff can be substantial. And for the first few years of the new millennium, it was a go-go place to be. With so much easy money sloshing around, the number of private equity deals exploded, totaling over half a trillion Dollars at the manic peak in '07.

Then came the crash... 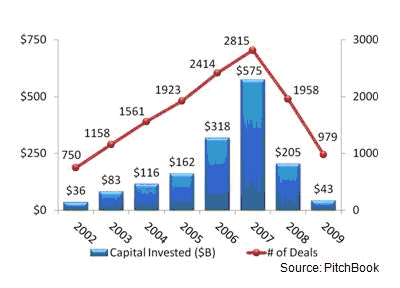 It's important to remember that credit was not a single bubble. It was a bubble machine.

Credit created the housing bubble, which fueled the personal debt bubble (which in turn popped the housing bubble, but that's another story)...while the mortgage market gave birth to a whole new range of derivatives, things like collateralized debt obligations (CDOs), mortgage-backed securities (MBSs), and the rest of the acronyms we've all become familiar with, even if we don't quite understand what they do.

(Don't be embarrassed if you don't get all those acronyms. Neither did the financial geniuses who swapped them like baseball cards...)

Frantic trading in these newly printed scraps of paper created its own bubble, manufacturing an incredible amount of seeming liquidity in a very compressed time frame. We know the ultimate consequences to the balance sheets of our banks, and our government, by now. But there was more to it than that.

The capital these transactions threw off had to go somewhere, and suddenly well-capitalized investors were pouring their phantom profits into something perceived as more solid: private equity firms.

Hey presto – yet another bubble!

In a mania, all investments are at the mercy of the greater fool. Meaning that if you can't find one, you're it. Doesn't matter if we're talking housing, stocks, commodities, or whole companies. The last man standing is left staring into an abyss in which there are no buyers.

With private equity deals, investors don't acquire companies because they want to own them. They buy in because they expect to sell to a higher bidder. Here are their three exit strategies:

And this is what's happened in those areas over the past eight years: 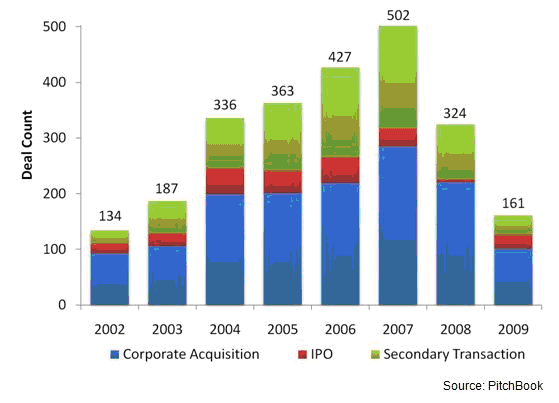 Compare the two graphs, and it's immediately apparent that private equity firms are sitting on a lot of property that'll be difficult to move.

They invested an unprecedented amount right at the same time as the bottom was falling out of an overheated exit market, returning back to normal levels of deal flow in just two short years.

Furthermore, while it looks like public stock offerings (IPOs) in general recovered a bit in 2009, they still totaled just 25 from the ranks of private-equity-backed companies. And even that number may be misleading. According to PitchBook, a respected industry analyst, "a number of these IPOs did not represent full exits but were used as a means of raising capital to pay down debt and provide investors with partial returns."

At the same time, much of the huge money stack they piled up through '07 is still there. It doesn't move because, in the current environment, there's no point in adding more companies when they can't profitably dispose of the pile they already have. And that's led to a boatload of uninvested capital – a massive cash overhang estimated at some $400 billion.

What to make of it? First of all, you can save the pity you might slop onto these firms. They are, after all, making some kind of return on the money they hold. Beyond that, though, we're looking at the potential for some pretty vinegary vintages.

Generally, the wait time for a vintage to mature – i.e., for the investment to show a profit – is about five years. So the more than $1 trillion thrown into private equity firms between 2005 and 2007 will be expected to yield fine wines from now through 2012. Which or may not hold good. But for comparison, we can also look at private equity's sister market, venture capital.

In a recent analysis of venture capital funds, investment advisor Cambridge Associates reported that returns were off steeply from their heyday in the early '00s, falling from 36% to 14% following a similar flood of increased inflows during the early part of last decade. A similar decline in returns from private equity investments – with lower risk and lower expectations than venture capital – could take them down into the single digits, if not close to or below zero. You might as well be in Treasury notes.

The takeaway? Private equity fuels the IPO market, as well as the growth pipeline for big companies that can't grow organically. But private equity firms are now sitting on the financial equivalent of a bunch of drunken Vegas marriages, having pledged "till death do us part" at the top of the frothy debt market.

All those unwanted spouses in the portfolio mean lower gains. Now add in the excess capital, much of which may end up being recalled by investors tired of waiting for it to be invested, and the big firms – which grew cocky playing with billions in this once-lucrative market – are likely in for some lean years.

What does all this mean to you as an investor? Well, you need to be wary of IPOs; many of the dogs will be trotted out for public flotations, with tails wagging and mouths closed to hide the rotting teeth. Also headed your way are diminished returns for the banks and insurance companies that back the private equity guys. And if stock-market prices remain at recent highs, there will probably be a shakeout in the industry, as increasing numbers of companies look to global public markets to raise money, instead of turning to private equity

Indeed, that trend is already apparent with the incredible number of secondary offerings over the past few months (in just two days this past September, nine were filed or priced on US markets), and the thawing global IPO market.