END_OF_DOCUMENT_TOKEN_TO_BE_REPLACED

Have you seen how expensive US stocks have become...?

AT FIRST it seemed that a grilled cheese food truck company valued at $107 million might mark the top for the US stock market, but that was clearly premature, writes Tim Price on his blog, ThePriceOfEverything.

Then it seemed that the IPO of a profitless web business granting no shareholder voting rights valued at $28 billion might mark the top of the market, but that turned out to be premature too.

Perhaps the inability of President Trump to repeal Obamacare might do what Grilled Cheese Truck, Inc. and Snapchat failed to do, and finally and conclusively mark the top of a frothy market, given that much of the valuation has been driven by expectations around political change that now look more than a little overheated.

And if the Obamacare defeat isn't sufficient to turn the market around, perhaps the launch of Mike Tyson's brokerage offering 400 times leverage might be.

So it's clearly time to republish our weekly glimpse at Robert Shiller's cyclically adjusted Price/Earnings ratio for the US market, which now stands at just under 29 times, versus a long-run average for the share prices of those companies in terms of their annual corporate earnings of roughly 17.

Did someone use the word 'unsustainable'? 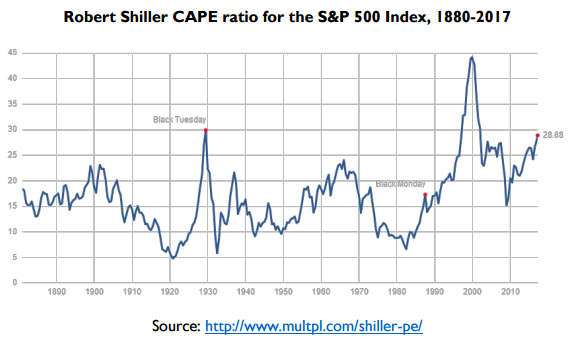 If it isn't unsustainable, some other word will have to serve to describe the mismatch between euphoric expectations of corporate earnings and the sober reality.

As Alhambra Investment Partners point out, as recently as October, analysts were forecasting $29 in earnings for the S&P500 in Q4 2016. As of the middle of the earnings reports last month, that estimate dropped to $26.37.

Since that time, with almost all companies now having reported, the current figure is $24.15 – a decline of over $2 in four weeks. The trend in reported EPS is shown below. 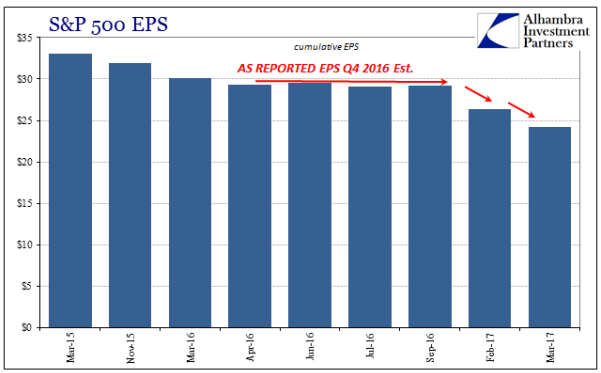 As we take pains to point out, we have no real dog in this fight; we just prefer to look for more attractive valuations elsewhere.

Meanwhile, the debate over the merits of passive versus active investing continues. Lower cost passive funds continue to eat the lunch of active managers, as the chart below confirms. 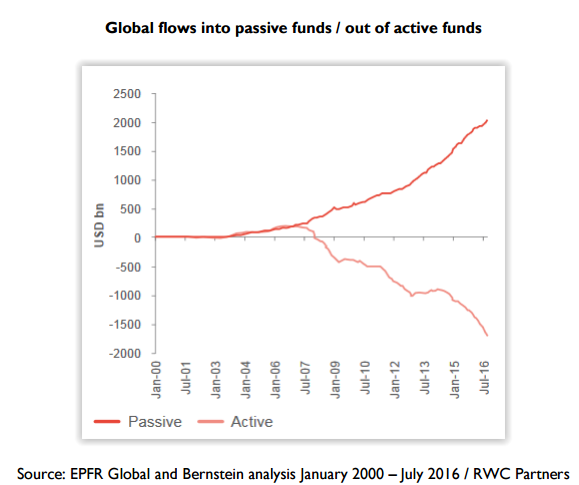 The latest advocate for passive investing is Quentin Marshall of Weatherby's Private Bank, which caters to the owners of thoroughbred racehorses in the UK.

In a recent interview with the Financial Times, Mr Marshall describes the asset management industry's story as akin to that of the "Emperor's New Clothes", in which fees are high and underperformance relative to an index almost assured.

There is no doubt something to this criticism, but to pretend that passive investing is some kind of panacea is naïve. As Ian Lance of RWC Partners points out,

"For anyone who believes in the long-term merits of value investing, passive investing should make little sense since it is the antithesis: passive investing structurally overweights expensive stocks whilst underweighting cheap stocks. Passive investors in 2000 were allocating large chunks of their money to bubble stocks like Cisco, Sun and Yahoo, and also to accounting frauds like Enron and Worldcom which were on their way to zero."

A good way to demolish the 'pure passive' approach and reveal its intellectual paucity would be to describe it as Snapchat investing.

Another wrinkle with the 'pure passive' approach is timing. Blithely holding yourself as a hostage to fortune to the (US) market today just feels dangerous, as RWC's chart below indicates: 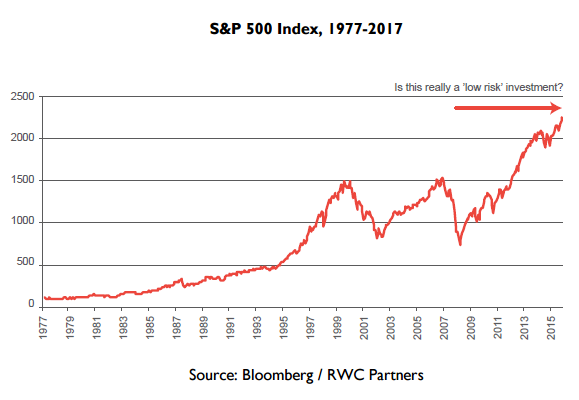 "There are times when the market return is good enough, but now is not one of them."

GMO, as (active) asset managers, have proven themselves no slouches when it comes to forecasting likely returns from the major asset classes, and their current assessment of prospects, notably for US large caps, does not look auspicious. 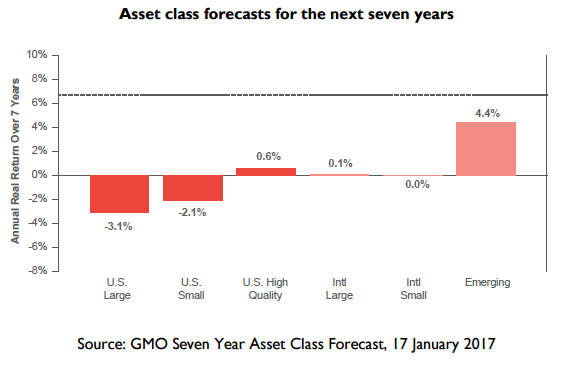 To adopt passive investment vehicles entirely requires that one's asset allocation be, to all intents and purposes, perfect. Suffice to say, in a world beset by QE, ZIRP and rising political and economic uncertainty, making the perfect ex ante asset allocation decision is more than usually difficult.

The single most important characteristic of any investment you make is the starting valuation of what you buy when you buy it. Passive investing effectively ignores valuations and hands future returns – and, of course, the attendant risks – over to "the market". We have little experience of horseracing, but we're pretty sure that you can't thrive by betting on all of the horses in the race and then getting the average return.