END_OF_DOCUMENT_TOKEN_TO_BE_REPLACED

Platinum has never been so cheap versus the Gold Price. Meaning what...?

PLATINUM is a highly useful metal, writes Adrian Ash at BullionVault. So too is gold.

But where gold's use is primarily social – a store of value and wealth – platinum (from platina, Modern Latin via Spanish for "little silver") is first and foremost an industrial metal. Which isn't helping platinum versus the Gold Price one bit right now. 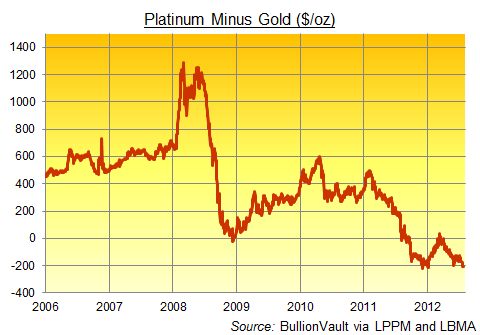 Little silver was only identified as a precious metal in the mid-18th century. So it lacks the long history of gold's use, which stretches back to the very earliest civilizations. Platinum has always traded however at a steep premium to gold – a 46% premium per ounce in fact in our modern age of global commodity markets, unbacked fiat currency, and fast-growing  car ownership.

Hence the problem in today's economic depression. Gold has never before been this expensive in comparison. Because "platinum lacks safe haven status and has limited investment demand," explains Morgan Stanley's commodities team.

Yes, jewelry accounted last year for nearly one-third of global platinum demand. But little of that was store-of-value demand such as gold enjoys. Investment demand remains only a sliver of world off-take. Whereas demand from the glass, medical, chemical and petroleum industries comes on top of a further 38% of demand in 2011 coming from the auto sector. Most notably in Europe, because earlier tax incentives now mean 1-in-3 vehicles on the continent's roads runs on diesel, thus needing a platinum-only catalyst instead of the platinum-rhodium or palladium mix in gasoline engines.

So platinum demand is directly exposed to the Eurozone crisis. So exposed, in fact, that London bullion prices are now nearing mine-production costs around $1400 per ounce. Cue the bullish outlook:

"It is hard to see any exploration or investment in new mines taking place until platinum prices push up well above $1,600/oz," says French investment and bullion bank Natixis. "Already some producers are making cutbacks," notes Nikos Kavalis at RBS, adding that "Current price levels are unsustainable." Dan Smith of Standard Chartered is also bullish, telling Reuters that "High-cost producers are currently losing money on an operating-cost basis, and the pressure on the industry can already be seen."

What then of gold and its current but rare premium to more "useful" platinum? There was a similar squeeze on platinum output – some 75% of which comes from South Africa – the last time platinum outperformed the Gold Price. The first-half of 2008 saw little silver jump 34% as the state-owned Eskom electricity producer cut power to South Africa's mines in a bid to keep the lights amid soaring coal prices. Gold couldn't keep up, managing a mere 10% rise in US Dollar terms.

The credit crunch was by then well underway. But while it didn't really grab the world's lapels and spit in its eye until September '08 – when the collapse of Lehmans sparked a collapse in trade, investment and business credit worldwide – leveraged bets on platinum futures, along with a raft of other industrial commodities, had already turned sharply lower. So "News that might have previously been viewed as bullish was ignored by the market," said refiner and leading platinum data source Johnson Matthey in August 2008, pointing to Eskom's part-closure of a nuclear power plant – the kind of news which has seen platinum vault $100 per ounce in a day at the start of the year.

Store-of-wealth gold at first suffered right alongside. The "net long" position of speculative players in Comex Gold Futures shrank by almost four-fifths in the last six months of '08. The price, however, slid only 10% between July and Christmas that year, having found its floor very much sooner – and rising very much faster – than any other tradable asset. Platinum, in contrast, sank over 55%.

The Gold Price has since pulled platinum down to fresh record discounts. Which might signal either a turn, as the City's professional analysts think, or the true depth of our current depression. But whatever tight supply might do for "little silver" long-term, tight credit might trump it meantime.

Get the safest gold at the lowest prices using world #1 for private investors, BullionVault...