END_OF_DOCUMENT_TOKEN_TO_BE_REPLACED

Crude oil rates explode on latest Russia sanctions...
OVER the past 12 months, global container shipping rates have steadily declined to their long-term averages, says Frank Holmes at US Global Investors.
This came as supply chain snarls have receded and backups at ports have disappeared.
Now, another segment of the cargo shipping industry is seeing day rates explode to record highs.
So-called dirty tankers, those that carry crude oil, are charging over $100,000 a day for their services as international sanctions against Russia force ships – including Suezmaxes, Aframaxes and very large crude carriers (VLCCs) – to take longer, more circuitous routes.
Carriers that once made deliveries to the North Sea port of Rotterdam via the Baltic Sea are now having to sail to China, India and Turkey, which are twice or three times the distance. All three Asian countries have said they will continue to buy Russian oil.
The Baltic Exchange Dirty Tanker Index, which measures shipping rates on 12 international routes, rose as much as 243% for the 12-month period through the end of November. 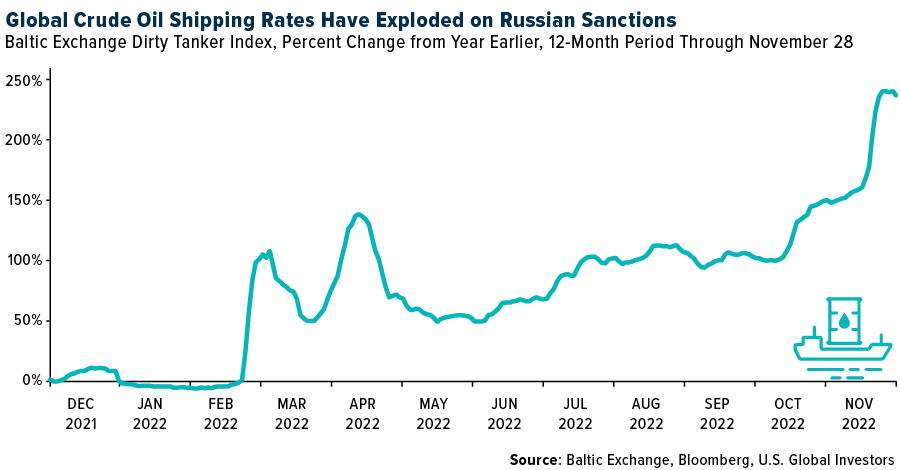 So how high could rates go?
According to Omar Nokta, a shipping analyst at Jefferies, they could potentially climb to between $150,000 and $200,000 a day.
We're almost there now. The Aframax day rate to ship oil from the Black Sea to the Mediterranean hit an astronomical $145,000 a day during the week ended November 18, according to Compass Maritime.
Last week, the 27 countries of the European Union (EU) officially banned crude imports from Russia, the world's number two producer, and on February 5, 2023, all Russian oil products will be banned. This will have the effect of disrupting global trade routes further, driving up rates even more.
As you can see below, Europe's imports of Russian oil were already down dramatically from the beginning of 2022, when the country invaded Ukraine. Before the ban, the Netherlands was the only remaining European destination for deliveries outside of the Mediterranean and Black Sea basin. To help offset the loss of Russian supply, Norway will ship a record volume of North Sea oil in January, Bloomberg reports.

Due to changes in shipping routes, demand for oil tankers is expected to surge to levels not seen in three decades, according to Clarkson Research. The UK-based group is forecasting that the number of ton-miles, defined as one ton of freight shipped one mile, could increase 9.5% next year. That would mark the largest annual increase since 1993.
Volumes are already at pre-pandemic levels, with VLCCs and Aframaxes having exceeded 2019 volumes for the first time since the second quarter of 2020. 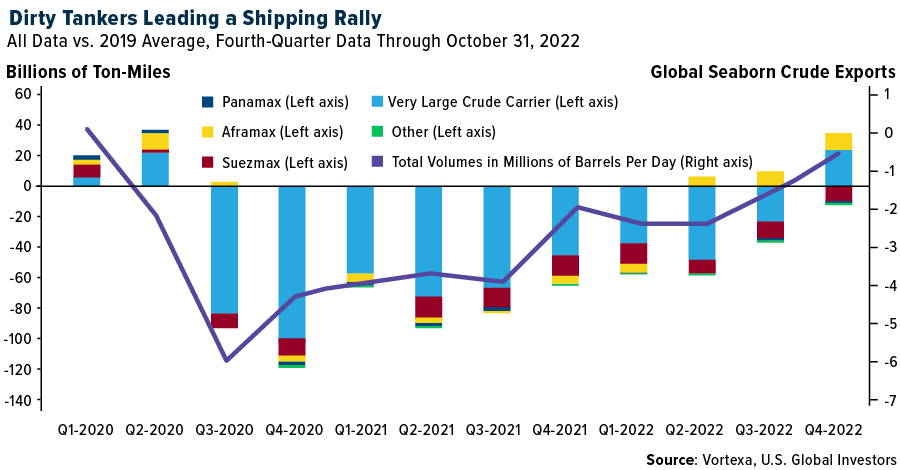 Also supporting rates is the fact that oil carriers are replacing vessels at a historically low pace.
In July, Clarksons reported that new shipbuilding orders for container vessels had surpassed those for tankers for the first time ever. Whereas the global orderbook for containerships stood at 72.5 million deadweight tonnage (dwt) – a measure for how much weight a ship can carrier – the orderbook for crude oil and oil product tankers was 34 million dwt, a new record low.
This has contributed to massive revenues and net income, which should keep carriers in a strong position even as container rates have dried up. Last week, Mitsui O.S.K. Lines president Takeshi Hashimoto told J.P.Morgan analysts that he believes profits will remain strong due to the company's liquified natural gas (LNG) business as well as dry bulkers and tankers.
Frontline, the fourth largest oil tanker company, just reported net income of $154.4 million in the third quarter, compared to $108.5 million estimated.
Below you can see how revenues have surged for companies such as International Seaways, Ardmore Shipping and Scorpio Tankers. 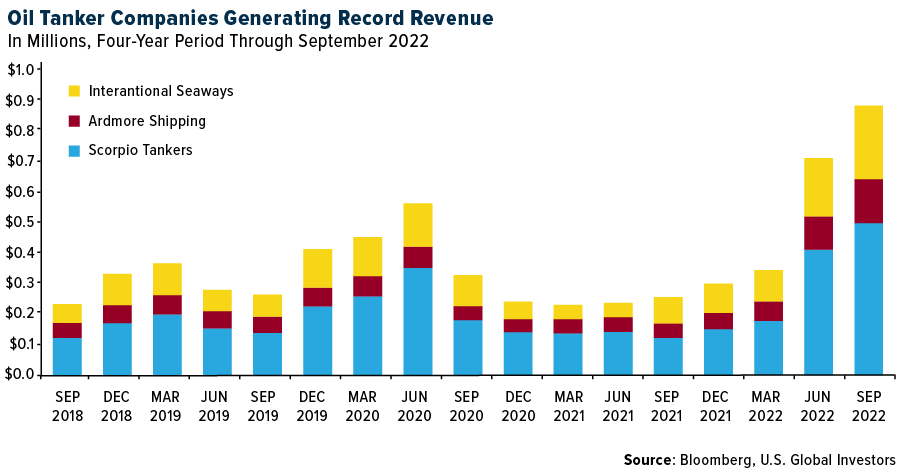 With the S&P 500 still down more than 14% for the year, shares of a number of oil tankers have hit new all-time highs in recent days. Among those are Ardmore, International Seaways and Euronav. Teekay Tankers was up 226% year-to-date, while Scorpio was up 323% over the same period.
Will these returns continue? I can't say, of course, but the structural support doesn't appear to be going away anytime soon.