END_OF_DOCUMENT_TOKEN_TO_BE_REPLACED

If it hasn't already started...

IS THE economy in for a jolting 'oil shock'? asks Brian Maher, managing editor of The Daily Reckoning.

Today we wander out to the tail end of the bell curve...look around for black swans...and raise scandalous questions.

"Judging by internet searches for the term," says Bloomberg commodities analyst David Fickling, "an oil shock is the last thing anyone should be worried about."

It is true – "oil shock" is an orphan term, unloved, unwanted – and unsearched: 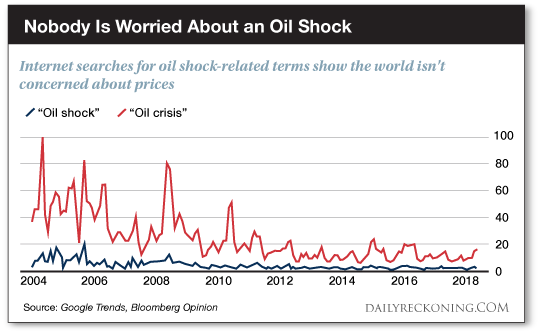 We would be "shocked" if the search term "oil shock" drew any attention at all these past few years.

It has been rebuilding steam for the past two years – but quietly.

Oil has since taken a long, meandering route to last month's $72...before retracing a few steps.

That nonetheless represents a 170% increase over the past two years.

And UBS economists claim the 46% spike over the past year alone is the 11th largest of the past 70 years.

This is not the oil shock of the 1970s when OPEC put the squeeze on us.

But must it be that extreme to disrupt?

Economist James Hamilton of UC San Diego has drilled into the history of oil shocks.

Oil prices need only rise above their peak for the previous three years.

The threshold is much lower.

Before last November, oil had not cracked the $60 mark since June 2015 – precisely three years ago.

Today's $65-72 range thus exceeds the peak price over the past three years.

By this narrow definition...we are witnessing an oil shock.

To illustrate, take some liberty and extend the analysis a year or two...

Bloomberg columnist David Fickling notes that oil prices averaged roughly $30 in the mid-1980s before falling to an average $20 until decade's end.

Then Saddam Hussein moved on Kuwait in 1990.

In the five months leading up to Operation Desert Storm, oil prices spiked to an average $30.84.

Prices had only reverted to their mid-'80s average, in other words.

But that spike, Fickling concludes, was sufficient to trigger the recession of the early '90s – at least in part.

Do not focus on the Dollar price we are asked to conclude...but the current price compared with recent peaks.

And by that measure, Hamilton argues we are presently witnessing the largest oil shock since 2008 – when prices shot to an obscene $144: 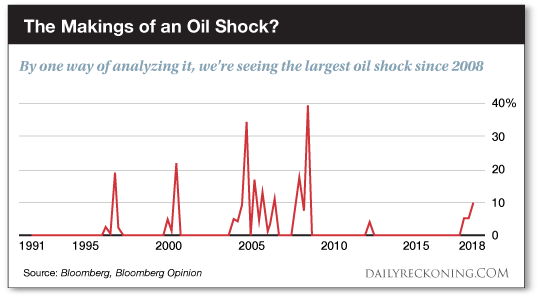 Maybe this is some sort of quiet oil shock, you agree grudgingly.

But the big deal is what precisely?

The economy is in swell shape, you say.

Unemployment is at multidecade lows...tax cuts are fattening the national purse...markets are regaining their bounce after February's correction.

And mainstream consensus dismisses the possibility of an oil shock.

Bank of America Merrill Lynch is typical when it says it doesn't expect higher oil to produce "a material slowdown in growth."

But we would remind you that mainstream forecasters are perpetually in the mists.

These results demonstrated that the professional wiseacres missed 148 out of 153 world recessions – a nearly imperfect record.

Why should now be any different?

And let the record show...

Moreover, they approach on cat's paws...and pounce without warning.

"Oil shocks are prophets – not partners – of economic downturns. This means that one shouldn't expect to see other signs of weakness until the shock has already taken root.

"So unless supplies surge and prices ease sharply, and in the very near future to offset what has already been a remarkable 'oil shock', the next downturn may already be a foregone conclusion."

Is the next downturn a foregone conclusion?

We do not pretend to know.

But few are taking any note of an oil shock right now – which we find worrying.