END_OF_DOCUMENT_TOKEN_TO_BE_REPLACED

WILL HE or won't he? asks Frank Holmes at US Global Investors.

That seems to be the question on a lot of traders and investors' minds today with regard to Federal Reserve chair Jay Powell. An October rate cut appeared back on the table after disappointing economic news was released last week. But Friday's mostly-positive employment report may have dashed those chances.

First, the "bad" news. The Institute for Supply Management (ISM) reported last week that both the US manufacturing and non-manufacturing sectors weakened in September. The non-manufacturing, or services, purchasing manager's index (PMI) fell to 52.6, down from August's 56.4, representing the lowest reading since August 2016.

The manufacturing PMI, meanwhile, contracted for the second straight month in September, as I mentioned in last week's Frank Talk. The gauge came in at 47.8, a 10-year low.

According to one company that makes electrical equipment, appliances and components, the US economy "seems to be softening. The tariffs have caused much confusion in the industry."

The weakness in manufacturing turned up also in ADP's employment report, which showed that the sector added only 2,000 net new jobs last month. This made manufacturing the second weakest area of the US economy in September, following only natural resources and mining, which lost 3,000 jobs on net.

Economists and market-watchers were bracing for the worst leading up to last month's "official" employment report. And while the actual number of jobs added in September – 136,000 – wasn't particularly inspiring, markets seemed to like the fact that the unemployment rate fell to 3.5%, an incredible 50-year low.

So the economic expansion, already the longest in US history, continues unabated. But the question still stands: Will he or won't he? The poor manufacturing data certainly gives Powell license to cut rates another 25 basis points (bps) this month. At the same time, does it really make sense for him to do so with unemployment at its lowest level since the beginning of the Nixon administration?

It wasn't just stocks that responded favorably to the jobs report. Oil prices traded up after being knocked down for eight straight days, a losing streak we haven't seen in more than two years.

Concerns about a slowing global economy, falling demand and signs of excess supply despite recent production cuts by the Organization of Petroleum Exporting Countries (OPEC) weighed on oil prices before Friday's turnaround.

Also putting pressure on oil is Norway's massive divestiture of fossil fuel equities. The country's pension fund, the world's largest at $1.1 trillion, just got the go-ahead from the Norwegian government to sell as much as $5.9 billion worth of oil and gas stocks. Oil and gas stocks are what made the wealth fund what it is today. In fact, it was set up specifically to invest in the country's lucrative North Sea oilfields.

In any case, the $5.9 billion doesn't represent the fund's entire oil and gas position, but the plan is for it to exit all stocks categorized as "crude producers" over time, according to Norway's finance minister.

In other oil-related news, IHS Markit released an eye-opening report suggesting that conventional drilling and exploration may be at death's door. In the past three years, oil and gas discoveries made by conventional means have fallen to a seven-decade low. What's more, "a significant rebound is not expected," the report's authors write. 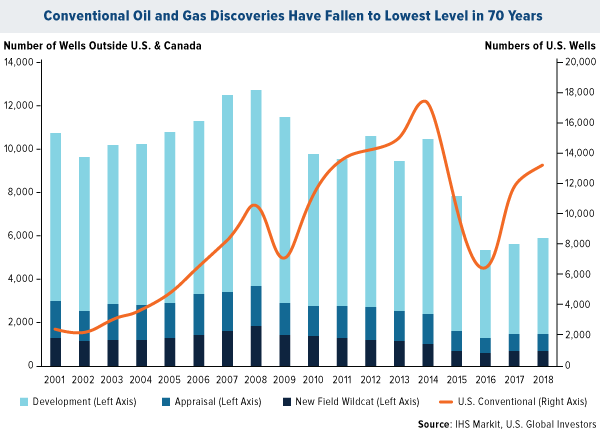 The decline in conventional discoveries, IHS Markit writes, comes as a result not just of lower oil prices, which has discouraged some investors from backing costly "wildcat," or unproven, drilling projects. Competition from short-term, less costly "unconventional" drilling (shale and fracking) has also made a sizeable impact, especially here in the US

I've written many times before on the American success story that is fracking. It's instrumental in making the US the world's largest oil producer. The country just produced 12.4 million barrels per day (bpd) in the week ended September 27, according to the Energy Information Administration (EIA). That's just a hair below the record US high of 12.5 million bpd, reached in August.

The biggest downside to having fewer conventional discoveries, according to IHS Markit, is that it could limit future global reserves and, in effect, drive up fuel costs.

Still, economic conditions look strong in the US, and according to Larry Kudlow, President Donald Trump's chief economic advisor, there could be some "positive surprises" as US and Chinese trade negotiators meet.

Nevertheless, many investors are seeking safety from a potential pullback by piling into Treasuries as well as funds that invest in gold and precious metals. Such funds took in a total of $2.8 billion in the week ended September 25, the second biggest weekly amount on record, according to the Bank of America Merrill Lynch.

Although gold ended the month of September down some 3.7%, it was up almost as much in the third quarter, helping improve investors' risk-adjusted returns. Throughout much of the quarter, stocks traded sideways, a trend that CLSA forecasts will "remain intact into year-end with immediate downside risk through October for the majority of markets."

To manage risk, CLSA recommends investors buy the dips in gold, writing that they're attractive buying opportunities "in anticipation of a resumption of the initial base breakout."