END_OF_DOCUMENT_TOKEN_TO_BE_REPLACED

Whereas most investors during that time of financial panic were dumping their freefalling US equities, Buffett was snatching them up at such great volume that he imagined his personal, non-Berkshire Hathaway portfolio would soon be composed only of domestic stocks.

"I haven't the faintest idea as to whether stocks will be higher or lower a month – or a year – from now," he continued. "What is likely, however, is that the market will move higher, perhaps substantially so, well before either sentiment or the economy turns up."

The same is true for oil prices. I can't say when oil will begin to recover or by how much. What I can say is this: For far too many investors, by the time they gain back the confidence to put money into oil stocks again, the rally might have already taken off, making it challenging to capture the full benefit of the upswing.
Think of it this way. Every Black Friday, merchandise is discounted to such an extent that thousands of bargain shoppers are willing to camp overnight in parking lots to be the first inside. When the doors open, people literally get pushed, shoved, elbowed and trampled on.
But too often, the stock market works in a curiously opposite way. When certain stocks drop in price, investors scramble for the exit instead of picking up the bargains.
Oil tycoon T. Boone Pickens recently told Mad Money's Jim Cramer that oil would return to $100 within 12 to 18 months. Again, there's no guarantee that this will happen – and keep in mind that it's in Pickens' self-interest that oil reach these figures again – but if it does, the most opportune time to participate in the oil trade could be now when stocks are at a discount.
Pickens' prediction aside, there are sound reasons to believe that oil prices will be normalizing sooner rather than later.
For one, oil prices are currently below many countries' breakeven prices. This could finally encourage the Organization of the Petroleum Exporting Countries (OPEC) to cut production, so long as Saudi Arabia got assurances from fellow members that they would comply with the cuts. Where they are right now, prices simply aren't sustainable. According to Business Insider, oil rigs in the Permian Basin have fallen by nine; those in Williston by seven; and those in Marcellus by one.
Brian Hicks, portfolio manager of our Global Resources Fund, believes that the bottom for oil prices might have already been reached.

"Aggressive capex cuts in the oil industry right now will lead to lower supply in 2015 and 2016, increasing demand and pushing up prices," Brian says. "Plus, there might be a positive seasonal trading session over the next few weeks, with a possible laggard rebound in January."

Although past performance is no guarantee of future results, the chart below, which takes into account 30, 15 and five years' worth of seasonal data for oil prices, illustrates Brian's point. In the 30-year range, a steady decline in prices began in October and bottomed in February. This was followed by a substantial rally that carried us through the first and second quarters of the year. It's possible the same will happen again early next year. 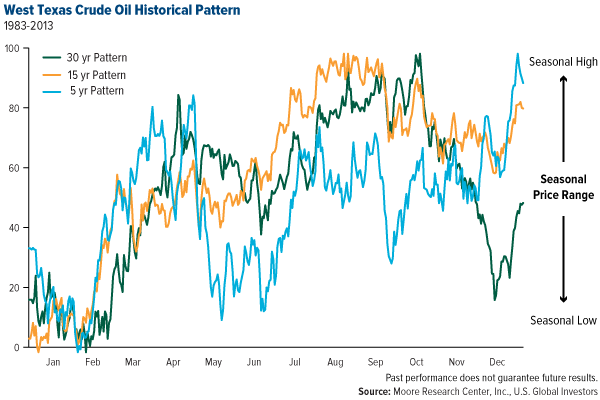 "The theme going into 2015 is mean reversion," Brian said in a Frank Talk a couple of weeks ago. "Oil prices are below where they should be, and hopefully they'll start gravitating back to the equilibrium price of between $80 and $85 a barrel."
While we wait for oil to revert back to its mean, however, the world can enjoy and benefit from inexpensive gas. Call it the "oil peace dividend". Here in the US, the current average for a gallon of gas is $2.45. Just one year ago, it was $3.21 per gallon, $0.76 higher. Over the course of a year, those extra cents add up.
But the US isn't the only country that benefits from affordable fuel.
In an article titled " The Saudi Stimulus", Jon Markman writes that the global economy is looking to save hundreds of billions of Dollars on an annual basis:

"According to EIA [US Energy Information Administration] data, consumption of crude oil during the latest 12 months was 6.9 billion barrels. So the price drop from $107/barrel at the June 2014 high to $59 today represents a total presumptive savings of $332 billion per year."

In a time when China, the European Union and other major markets are trying to jumpstart their economies, a $330 billion tax break can only come as good news. It should help in stimulating spending and driving global economic growth.
But it's impossible not to discuss falling oil prices without also touching on Russia, half of whose budget depends on $100-per-barrel oil exports. In the past month alone, the federation's currency has plunged more than 30 percent to 60 Rubles to the Dollar as Brent oil has slipped nearly 25 percent. 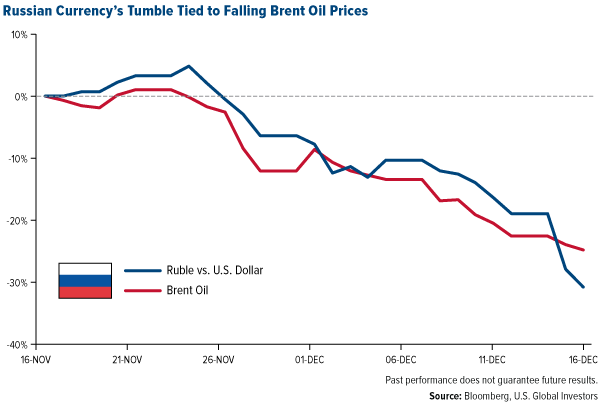 President Vladimir Putin couldn't have chosen a worse time to annex the Crimean peninsula because now the region must be subsidized with money Russia doesn't really have at the moment.
That's not to say, of course, that there was ever a good time to invade Ukraine, or that Putin could have predicted the dramatic decline in Brent oil prices. But even before the Ruble began to unravel, stocks in Russia's MICEX Index had already taken a hit in July and fallen out of lockstep with other emerging markets.
There's no lack of commentators making comparisons between the Russian Federation's current tailspin and the country's 1998 debt crisis. But a more apt comparison might be the lead-up to the collapse of the Soviet Union in 1991, given the many uncanny parallels between then and now involving oil.
Yegor Gaidar, acting prime minister of Russia between 1991 and 1994, wrote in 2007:

"The timeline of the collapse of the Soviet Union can be traced to September 13, 1985...The Saudis stopped protecting oil prices, and Saudi Arabia quickly regained its share in the world market. During the next six months, oil production in Saudi Arabia increased fourfold, while oil prices collapsed by approximately the same amount in real terms.
"As a result, the Soviet Union lost approximately $20 billion per year, money without which the country simply could not survive."

Today, Russia is similarly hemorrhaging capital as a result of international sanctions and crashing oil prices, prompted by both the American shale oil boom and OPEC's inaction in stabilizing the commodity at last month's meeting.
It's unclear for how long Russia's government can support its oil-dependent budget. During his press conference last Thursday, President Putin conceded that spending cuts were unavoidable, but that "under the most unfavorable external economic scenario, this situation may go on for about two years."
Some readers might find that prognosis a little too optimistic. It could be that Russia is in for a much lengthier period of damage control.