END_OF_DOCUMENT_TOKEN_TO_BE_REPLACED

How the S&P500 and the US monetary base are correlated...
IT'S AS notable as a 2nd term president handing off the big problems to the next guy, writes Gary Tanashian in his Notes from the Rabbit Hole, just as George Bush did with Barack Obama in 2008.
The changing of the guard at the Fed, that is.
Alan Greenspan oversaw the making of a stock bubble in the final phase of the great bull market ended in 2000. He then instigated a credit bubble, which launched a housing bubble, made the credit hopped consumer feel wealthy and oh yes, built unsustainable distortions into the system through diced and sliced debt derivative vehicles of all kinds.
Then in 2006 he deftly made the hand off to Ben Bernanke. Bernanke then dealt with the Maestro's second aftermath as it began cropping up in 2007 and now, nearly 4.5 years into a cyclical bull market that has another 6 months or so to run if it is to match the two previous cycles (not a given), it is time once again for a hand off.
The poor shlep. Seriously, whether Larry Summers, Janet Yellen or some out of left field dark horse pick, the new Fed chief will probably end up with a mess to deal with. The S&P 500 is going up in lock step with the adjusted money supply that has been ramped due to QE's bond buying and monetization.
Here is a chart from NFTRH 249 that shows this in glaring detail. Increasing 'taper' talk (let alone action) would probably not be helpful to the markets if the strong correlation holds. 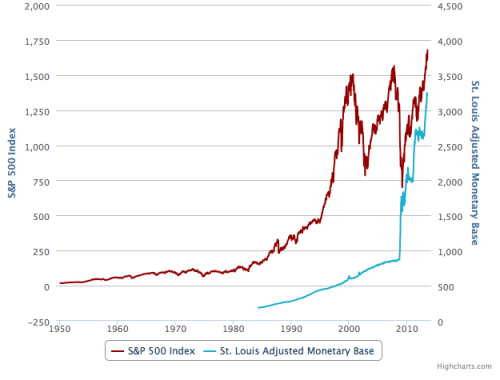 I believe that global Treasury bond supply/demand dynamics and not the Fed will decide when the bond purchase program will end.
The decisions are being made for them. Why on earth do you think they are flip flopping around in the media about 'taper, no taper, maybe taper... dohhh!'? They are like day traders looking at a 5 minute chart. They are day trading a super critical macro economic concept.
If you believe that the Fed is not all controlling and currently enjoys the equal and opposite status to the bumblers they were perceived as in 2011, you might think that their stock has peaked, given the pressure that the bond market is starting to exert upon them.
If the Fed's stock has peaked, what about its ability to keep the blue line spiking? If the blue line peaks, what about the maroon line? According to the chart above bulls remain Caught in a Dream: "Thought I was livin'... But you can't never tell... What I thought was heaven... Turned out to be hell." (Michael Bruce, from Alice Cooper's classic album Love it to Death.)
So we have some 'new Fed Chairman' drama to look forward to now in a market environment that always seems to have something to fixate upon in an age of extreme obsession with policy makers. The chart says that the Fed will only be popular as long as the blue line keeps rising. It does seem as though Mr. Bernanke's timing is just as good as that of his predecessor.