END_OF_DOCUMENT_TOKEN_TO_BE_REPLACED

Inflation has gone missing. Is digital money-printing to blame...?
TEE-HEE! Money really does grow on trees according to headline writers everywhere today, writes Adrian Ash at BullionVault.
Gold, no less, has been found in minute quantities in eucalyptus trees in Australia. Analyzing tree leaves and bark could now unearth gold deposits up to 30 metres below ground elsewhere in the world, geochemists say.
Good news perhaps for the gold mining sector. But unearthing that ore won't be easy like picking a leaf. Making money is never cost-free. And not even money-printers are making as much profit as you might imagine right now.
UK firm De La Rue today gave its second profits warning of the year. Weird as it sounds, there is over-capacity in money printing worldwide, it claims. That may seem hard to believe, what with quantitative easing still rolling ahead at record levels. But money printing isn't what it used to be, even in these most inflationary days. And De La Rue is lagging profit targets set back in 2010, when quantitative easing was hitting its stride.
De La Rue Plc is the world's largest independent printer of banknotes. It has printed 150 different currencies over the last 5 years, designing two-fifths of all new banknotes issued anywhere in the world since 2008.
You might think that was (ahem) a license to print money. But money-printing volumes actually fell this year, De La Rue says, down 10% in the first half of 2013.
Surely quantitative easing means there's more money around? Near-zero interest rates are also bringing more credit and spending to the economy, right? And what about the rebirth of real estate inflation, most notably in UK house prices but also worrying German politicians as even Berlin rents soar?
All that money, however, is electronic, not physical paper. Indeed, the central banks' printing presses are today an "electronic equivalent" as Ben Bernanke of the US Fed put it way back in 2002, urging the Japanese to debauch the Yen just as he's since attacked the Dollar. But it was paper money, not photons blinking on a bank-account balance, which fired inflation in the basket-case economy of Zimbabwe when Bernanke spoke a decade ago. So too in Argentina today. Digitized cash, in contrast, is now the real thing everywhere else, as military strategist, historian and consultant Edward Luttwak notes in an aside on Italian gangsters.
Starting in the 1990s, says Luttwak, the Calabrian family gangs pushing cocaine north into Europe as far as the new markets of the old Soviet states found their "Colombian [cocaine] suppliers refused to accept cash, because it was no good for investing in Miami real estate or local hotels or restaurants. The Calabrians needed real money: not bundles of paper but deposits in bank accounts that could be wired."
Fact is, legitimate businesses cannot use cash. And worldwide, reckons Mastercard (with a vested interest, of course), business transactions now account for 89% of the value of payments. Consumers, meantime, are also moving away from cash (at least, outside the black economy they are; and those immoral earnings still need laundering into the "real money" of digitized bank databases in the end). As a proportion of retail transactions by number, cashless payments now make up 80% in the United States, 89% in the UK, and all but 7% in Belgium according to Mastercard. Even ignoring the plastic PR team, nearly half of UK consumer transactions are now done without cash, with currency payments sinking almost 10% by value in 2012 from the year before, according to the British Retail Consortium. The bulk of non-cash growth came from "alternative" methods, notably PayPal, with "new ways to pay and new ways to shop shaping the retail landscape like never before."
Might this explain why consumer price inflation hasn't taken off in the developed West? Yes, there's lots more money around. Yes, people keep buying gold as protection. Because basic economics says this should push the general price level higher, as the value of each monetary unit is shrunk. But all this extra money sits on hard drives, servers and in the cloud, rather than in purses and wallets. That's where money is transacted too, in intangible code. Lacking a physical presence, perhaps this wall of money loses its impact. 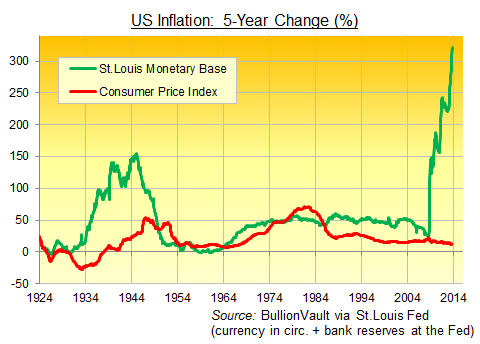 There are lots of other reasons you could give for why inflation hasn't surged on quantitative easing. It's all locked up in banking reserves, for instance, instead of reaching the "real" economy. Increased spending power since 2008 has gone almost entirely to the top 1%, who use it to buy shares, property and fine art rather than Doritos and donuts. Or perhaps central bankers really have kept that credibility which they fought to attain after the 1970s' inflation. Western households are now sure that the cost of living will never be let loose again.
But the birth of money back in ancient Greece changed our brains and our world. It made kings of anyone holding coin, with the "universal equivalent" marking the beginning of the end of feudal society just as it created an independent yard-stick for all values – mercantile, religious and personal. This is what the myth of King Midas is about, after all.
The human brain and how it conceives of the world is being changed again by digitization today. Just ask a 20-year old (go on, ask them. Ask them anything, and see if they can answer without checking online. Ask a 45-year old come to that). Plenty of people worry that digitization is changing us for the worse, twiddling their fears about the internet by writing, of course, on the internet. Plenty of other idiots think the posthuman world will prove a new joy, with the internet's jibber-jabber of lies, confusion and stupidity taking us back to some forgotten Eden where everyone's views are equal. Like, y'know, in the way opinions were freely allowed to medieval peasants who couldn't read? Today's infotainment and readers' comments let knowledge morph and shift just like knowledge was shared and communal pre-Gutenberg. Who needs the Enlightenment?!
Either way, perhaps our brave new digital world also revokes the iron law of money. Perhaps our flood of new cash will never end in higher living costs in the way it always has – always has – in the past. Because money we cannot touch cannot in turn touch prices as surely as paper or metal did.
Yeah right. And money really does grow on trees.