END_OF_DOCUMENT_TOKEN_TO_BE_REPLACED

Conflict between Iran and Saudi Arabia could boil over...

WHAT HAS everyone has forgotten or become complacent about? asks Dan Denning in the Daily Reckoning Australia.

Well, we would never presume to speak for everyone. Speaking for ourselves, we realized this morning how complacent we've become about the fact there's a war raging in the Middle East between Saudi Arabia and Iran. And it's getting worse by the day.

You probably won't see the escalating civil war in Syria described as a war between Iran and Saudi Arabia, but that's exactly what it is. This is a repeat of the same scenario that's played out across the Arab world since the Arab Spring began when Mohamed Bouazizi set himself on fire in Tunisia in December 2010. Authoritarian regimes (previously supported by the US and European allies) have melted away and left a power vacuum contested by Sunnis, Shias and other groups.

Five years ago, any hint of civil insurrection in the Arab world was enough to send the oil price up. The 'geopolitical' premium in oil was a huge factor in its run to US$145 in 2008. Then you had a combination of the financial crisis and the huge drop off in growth. Oil prices went into free fall.

They've recovered some since then, as the chart below shows. In fact, the recent price action caught our attention. The spot price of Brent Crude is up 15% since late June. The chart shows Brent consistently oversold for the last month, with the Relative Strength Index (RSI) under 30. And for what it's worth, the daily price has crossed above the 50-day moving average, which is usually a bullish sign. 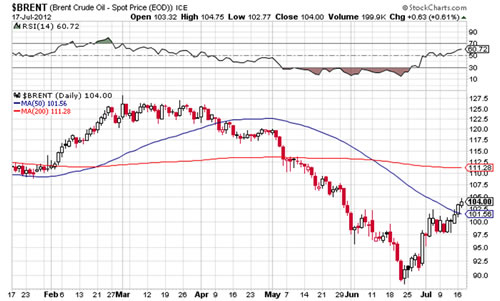 The oil price is moving again. And it can't be moving because of bullish growth forecasts from the world's major economies. Could the rise in Brent Crude be the first signal that the simmering war between Saudi Arabia and Iran is about to boil over in Syria?

Well, that depends on whether you accept our idea that most of the Middle East and Arab World conflicts can be seen as a proxy war between countries vying for regional/imperial influence. The countries most likely to try and gain influence from the regime changes are Iran, Saudi Arabia, and Turkey. With US strategic attention elsewhere, the Middle East is up for grabs. Most of that grabbing has been covert. It could become overt quickly.

This is all speculation. We remember writing about the probability of a war between the US and Iran almost ten years ago. It's a perennial threat to trot out on the television and have a couple of retired military analysts war-game it. Traders always talk about what would happen to the oil price if Iran closed the Strait of Hormuz (the narrow passage through which most Middle East oil exports travel).

The US doesn't want and can't afford a shooting war with Iran. That's the conclusion we've reached in the last few years. Industrial sabotage through software (Stuxnet and Flame) is the new weapon of choice in this conflict. Given this, we've become complacent about the probability of armed conflict between the United States and Iran. It seems highly unlikely, or at least hard to imagine in the current circumstances.

The current circumstances are that the United States is having a Presidential election. That means it will be restraining its allies in the region from stirring up trouble...the kind of trouble that can send oil and petrol prices suddenly higher. The US doesn't want a war...at least not yet.

You could also argue that the US doesn't need another oil war. The combination of horizontal drilling and hydraulic fracturing has unlocked huge energy reserves that the US couldn't access before. Shale gas, shale oil...offshore oil...all of it makes the Middle East less important to the US economically, and less important geopolitically.

This raises all sorts of interesting questions about the direction of US foreign policy. But we'll leave those aside. Our point today is that what's convenient and desirable for the US may be neither convenient nor desirable for the Saudis or the Iranians (or the Russians and the Chinese). Markets are fixated on monetary policy and fiscal deficits. It's times like this when you're most likely to get broadsided by a conflict you completely forgot about. Heads up.