END_OF_DOCUMENT_TOKEN_TO_BE_REPLACED


A FRIEND of mine made a big deal over the weekend of the latest consumer credit numbers, writes Brad Zigler at Hard Assets Investor.

In case you missed the headlines, the Federal Reserve reported that borrowing took a hard drop in November, its latest data set. The 18% year-over year drop in US consumer credit was the latest in a string of 10 straight months of borrowing declines, the deepest since government tracking began in 1943.

There's real concern about these numbers. After all, consumer debt equates to more than two-thirds of gross domestic product.

My friend, a curmudgeonly sort, wraps up his opinion of this development in just one word: "Good!" Let's just say he has strong feelings about profligate spending. He simply views the credit trend as steps toward sanity after a huge borrowing binge.

My friend's also likely to feel encouraged by the recent drop-off in investor debt as well, though that number isn't making headlines. The latest figures from the New York Stock Exchange show a decline in margin debt carried in customer accounts. But unlike consumer borrowing, margin debt – money borrowed by investors to purchase securities – actually rose through most of 2009.

In fact, the November dip was the first reported since last January... 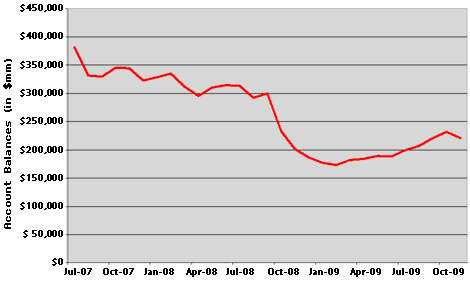 To be sure, investors are rather lightly margined compared to their state in June 2007, back when NYSE brokers said debt peaked at $381.4 billion. With November's drop, investor leverage has declined 42% from there.

But rekindling consumer confidence and a concomitant resurgence in retail borrowing is a vital objective of the Obama administration's stimulus package. Just as important – though not directly touted – is the re-leveraging of financial assets.

Much of the market rebound in 2009 can be attributed to leverage. Whether it continues into 2010 remains to be seen.