END_OF_DOCUMENT_TOKEN_TO_BE_REPLACED

All financial bubbles need the rabble to pile in before the bubble goes bang...

Glancing at the history of speculative bubbles, as we do all too often here at BullionVault, we find the ordinary sort in fact acts as the very pin itself.

The one thing needful at the top of each bubble, the rabble also take on the role of greatest sucker, too. Piling in as the smart money runs for the exits, the common-or-garden investor pays top price. He or she is then left holding the "asset" as its price collapses. And by this time, the Lear Jets have long since cleared the tarmac...taking the money with them.

Think of it as the classic "life cycle" pitch from your financial advisor, only with a side-splitting twist. There, you'll find a retirement hopeful moving from "accumulation" to "distribution" and then "legacy". In a market-wide bubble, by contrast, the smart money first accumulates assets, before distributing it to the dumb money, which is then left holding a legacy of wipe-out losses and debt.

Ha! It's a laugh-a-minute when the poor schmucks find the "wealth" that they've gathered is evaporating in the sell-off.

Something's amiss with the pattern of the latest financial bubble to burst, however – the bubble in cheap home loans. Yes, "Every fool aspired to be a knave," as a broadside noted of the South Sea Bubble nearly 300 years earlier. No-doc and low-doc aren't known as "liar's loans" for nothing.

But rather than the fools merely failing to turn knave now they're losing their homes, they have also succeeded in pushing the foolishness far higher up the food chain. The greatest excesses have come at the top, up in the marble-topped kitchen of haute finance – where the MBS, CDS and CDOs still can't be served, mercifully, to ordinary investors calling their broker direct.

Driven by the "liar's loans" of 2003-2006, in fact, this last gasp of air into the US housing boom saw the mortgage lenders and their creditors – the investment banks – playing the fools at every chance they got. 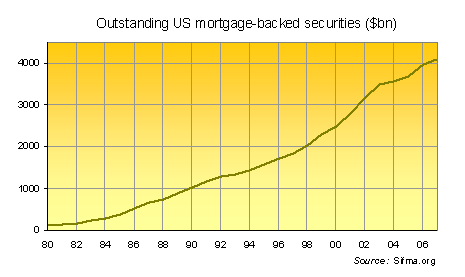 Mortgage lenders happily played the fool, apparently safe in the knowledge that the magic of securitization – of packaging home-loan assets for sale to other financial institutions – would get them "off risk" quick smart. Why worry about risk when appraising a new loan? The chance of default by the wannabee home-owner was set to become somebody else's concern.

Nor was the chance of default a concern for the investment banks, either. In running the sale of the home-loan backed bonds, they simply passed on the risk...letting it trickle through their fingers in return for a fat fee. Bundling higher-risk securities into a collateralized debt obligation (CDO) with enough boxes ticked to qualify for a triple-A rating, managers could earn up to 0.75% of the sum total. One asset manager says he'd expect a pay-out of $2.5 million each and every year until maturity on a $500 million CDO.

With the money men playing the fools so gladly, therefore, it's no surprise to find mortgage underwriting changed beyond recognition between 1998 and 2006, as First American Financial recently reported:

In short, the US mortgage market switched from cautious Fixed-Rate borrowing to head-in-the-sand ARMs...while the underlying debt was left untouched or actually grew larger...as borrowers struggled to meet just the interest alone after fudging the numbers to bag a loan they could never repay.

Most shocking of all, as Robert Rodriguez of First Pacific Advisors has noted, "is that the origination volumes for the last two years, when the most egregious deterioration in underwriting standards occurred, total more than the previous seven years of originations combined." 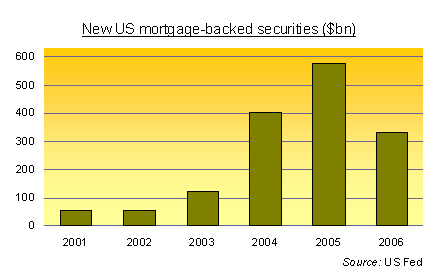 In short – and just as in every bubble before it – the value of cash taken out by the smart money at the top of the US home-loans scandal was greater than the entire accumulation preceding it.

Quite who this smart money was, however, remains a real mystery. For the dumb money pumped in at the top actually came from hedge funds and Wall Street insiders, rather than flowing to them! This time around, it was the smartest guys in the room who played sucker – lending money to home-buyers with no thought for risk and no hope of repayment.

A victory for us poor fools at the bottom, perhaps? Trouble is for the "meaner rabble", of course, the knaves and the fools at Bear Stearns, Queen's Walk, Basis Capital, IKB, BNP Paribas, Barclays Capital and everywhere else were using our retirement savings to inflate that last gasp. Put mortgage-backed tomfoolery aside, in fact, and you'll find the same problem – of professional investors neglecting the concept of risk in search of easy returns – right across the developed world's pension portfolio right now.

"24% of all the hyper-leveraged assets managed by large hedge funds ($1 billion or more) internationally, belong to pension funds and endowments," says a June 18 report from Greenwich Associates, as quoted by Paul Gallagher in the Executive Intelligence Review. "This average is just below the 25% limit at which an individual hedge fund, under the [US] Employee Retirement Income Security Act (ERISA) as modified in 2006, becomes an investment advisor with fiduciary responsibility for the pension fund doing the investing – something hedge funds obviously do not want to do."

More than that, pension funds have also stumped up one-fifth of the money held in 'hedge funds of funds', the aggregating super-funds run by many large banks. In first-half 2007, around 40% of current flows into the hedge fund industry has come from pension funds. And "as pension fund money is coming in," says Gallagher, "it's allowing 'smart' money to get out."

Or rather, the flood of pension fund money was allowing the smarties to get out before the start of August. Now even the dimmest pension fund trustee...sat on even the farthest flung beach for his vacation...will know just how foolish buying mortgage-backed bonds and derivatives would make him today. Quite how the so-called smart money now plans to exit the high-leverage debt markets is anyone's guess.

"The overall flow of capital into hedge funds has dropped dramatically – from $40 billion each quarter over January-September 2006," Gallagher goes on, "to just $12 billion in fourth quarter 2006, and $20.7 billion in first quarter 2007. Numerous reports, including a new one from Chicago-based Hedge Fund Research, Inc., have shown 'high net-worth individuals' reducing their net hedge fund investments by half, between 2006 and 2007 – investing instead into real property and stocks. They now account for only about 20% of the assets of hedge funds, which were supposedly made for them."

Instead of high-net worth billionaires, it's now Joe Public left holding this junk, thanks of course to his well-paid retirement fund managers. As late as May of this year, Jean Fleischhacker – a senior managing director at Bear Stearns – was telling fund managers gathered in a Vegas ballroom that they could generate 20% annual returns from un-rated mortgage-backed credit derivatives. The Dallas Police and Fire Pension Fund bought its first collateralized debt obligation (CDO) in early 2005. "We were beefing up our risk and we were hoping for a greater return," said Richard Tettament, head of the $3.2 billion fund, to Bloomberg in March. He couldn't say what kind of collateral was actually backing the CDO, but he reckoned the returns were above 20% in 2006. The largest bank in the United States, Citigroup, recently sold $140 million in just this kind of un-rated junk to the California Public Employees' Retirement System, too.

Members of the Calpers scheme have just got to wonder, along with the rest of us: How much is that $140 million worth today? Because the "meaner rabble" really did climb on board this mega-geared bubble in liars' loans.

It's just that in this money bubble, most people had no idea they were even involved – let alone put at risk. It should offer small comfort, however. Giving control of your money to a financial "expert" might indeed prove the most foolish decision of all.

To put a portion of your wealth into physical gold bullion now – accessing the very best prices available to private investors and enjoying secure storage in Zurich, Switzerland – be sure to visit BullionVault today...