END_OF_DOCUMENT_TOKEN_TO_BE_REPLACED

SINCE THE RESCUE of Bear Stearns on March 17th – also the top of the bull market in Gold to date – the Amex Securities Broker/Dealer Index has rallied 20% and the shares of Lehman Brothers have rocketed more than 30%, notes Dan Amoss for Whiskey & Gunpowder.

Most of Wall Street's moneymaking machines have shut down. Mortgage-securitization activity has gone kaput, while IPO and M&A activities are sputtering. Even worse, billions of dollars of future write-downs and losses are still buried inside Wall Street's balance sheets.


Lehman Brothers appears to be among the most vulnerable of all the investment banks. The stock has rallied hard since the Bear Stearns rescue. Because its business model closely resembles that of Bear Stearns, Wall Street thought Lehman was next.

And it might have been, if not for the Fed.

The Fed instituted a lending facility allowing the investment banks to temporarily swap the ugliest "alphabet soup" assets for Treasuries. These alphabet soup assets – mortgage-backed securities (MBS), asset-backed securities (ABS), collateralized loan obligations (CLO) and others – had been smothering the brokers to the point that Bear Stearns was hours from declaring bankruptcy.

In the hopeful words of Lehman Brothers CEO Dick Fuld, the Federal Reserve's lending facility "takes the liquidity issue for the entire industry off the table." Sure, the Fed's actions may have forestalled a modern-day "bank run" on Wall Street. But the Fed has not solved the bigger, longer-term crisis.

Shareholders are in the most junior position in every company's capital structure. So the more leverage – or debt – a company employs, the quicker shareholders get wiped out when assets sour.

This means Lehman's assets only have to fall about 3% in value before equity is wiped out. 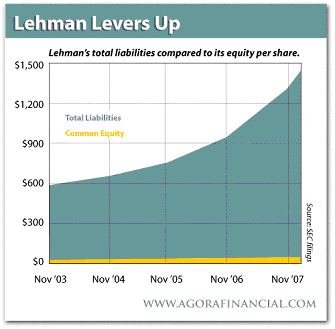 Lehman is scrambling to reduce leverage and raise capital by selling illiquid assets into a weak secondary market. Unfortunately, illiquid mortgage-backed securities aren't a particularly hot item these days. There are few buyers for such assets – even at steep discounts.

According to Bernstein Research, Lehman's "troubled" residential and commercial mortgage assets amount to nearly three times its tangible equity. That's danger level for Lehman shareholders. And the danger is growing... 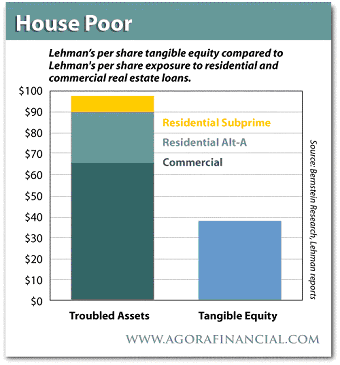 "We believe the quality of these earnings was weak," he writes, "as the firm benefited from a lower tax rate and enjoyed a $600 million mark-to-market gain on its liabilities."

But that's a polite understatement. Believe it or not, accounting rules allow investment banks to book a profit when the value of the bonds they have issued actually fall. Follow along with this crazy logic if you can.

Because the holders of Lehman's bonds became fearful that Lehman would declare bankruptcy, the bondholders dumped the bonds at very low prices. Therefore, because Lehman's bond prices tumbled, Lehman could – theoretically – buy back its own debt at prices much lower than the stated value of the bonds carried on Lehman's balance sheet.

As a result, this bizarre accounting rule concludes that Lehman can book a "profit" on the difference between the issue price of its bonds and the depressed market prices. And taken to an extreme, Lehman could probably post one if its most profitable quarters ever, just by declaring bankruptcy!

Obviously, falling bond prices indicate financial stress, and certainly do not produce sustainable, high-quality earnings. Such "earnings" do not generate cash or create any value of shareholders whatsoever.

Net-net, Lehman is still facing the likelihood of losing tens of billions of dollars over the course of the next few years. As losses pile up, Lehman will have to raise capital. That means flooding the market with LEH shares. Lehman may have to issue hundreds of millions of new shares at a discount to rebuild its capital shortfall, severely diluting the existing shareholders.

David Einhorn, an accomplished hedge fund manager, recently explained why he's still selling short Lehman shares. In a speech at the April 8 Grant's conference, he said that Lehman may have to boost its capital by as much as $30 to $70 billion. If Einhorn's guesstimate is anywhere close to the mark, Lehman's shareholders are in for a very rough ride.

The worst might be over for the financial sector, just like so many investors seem to believe. But a lot of bad stuff is still rolling their way. For the rest of 2008, therefore, investors might want to take their cue from Credit Suisse CEO Brady Dougan when he said, "The number of times people have seen the light at the end of the tunnel, it turned out to be a train coming down the tracks."