END_OF_DOCUMENT_TOKEN_TO_BE_REPLACED

Do bullion banks even exist anymore, top gold conference asks...
ORGANIZED by the industry for the industry, this year's London Bullion Market Association conference in Vienna had a cracking roster of speakers, writes Adrian Ash of BullionVault – and consensus is they gave the best set of gold, silver and PGM speeches since the event launched in 2000.
But many of this year's 690 attendees missed these great presentations, leaving the conference room worse than half-empty in favour of meeting current and prospective clients and counterparties instead. Because doing business is the market's real business, after all.
Also missing this year, as David Jollie (currently Mitsui) and John Reade (formerly Mitsui, then UBS, now Paulson & Co.) noted in their summing up, was the LBMA conference's usual focus on price.
Yes, several panel debates looked at where precious metals have been and where they might go – mostly down, in their opinion. But it was maybe less the speakers' gloom than the relative lack of price analysis which led attendees to cut their gold price forecasts for 1 year from now (the next conference, in Singapore).
Between Monday's opening and Tuesday's close, delegates lowered their average gold forecast almost 5%, down from a mildly bullish $1216 to only the second bearish call of the last 8 years at $1160 per ounce. Which may prove a contrarian signal to buy. Or simply show the conference's average outlook gets more accurate on less volatility. 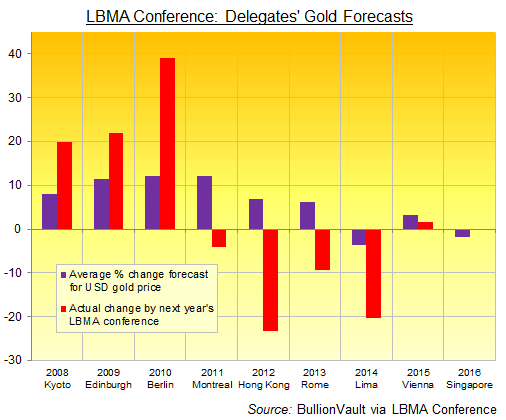 All told, LBMA 2015 didn't really find any single core topic on the podium. Detailed insights came instead from fellow LBMA members and invited speakers from across the market – notably on marketing platinum jewelry in India, the outlook for diesel auto-catalysts, and the nature and size of China's gold market.
There was a clear theme, however – a series of what Jollie called "frankly existential questions" for the world's wholesale bullion trade. This little crisis of self-doubt and reflection is of course prompted by the bull market in regulation. But the equally tireless shift of precious metals from West to East is also changing the professional gold market, even as China's surging demand shows no impact on price direction and as India's imports hold unchanged across the last decade around 800-900 tonnes per year despite gold prices quadrupling and then falling 35%.
Bullion banking itself – the business of helping finance new mining and other long-term deals with gold loans, forwards and swaps – is shrinking, the conference heard. One comment from the floor asked whether bullion banks even exist anymore, adding that only a handful have a strong mandate from their owner bank's senior executives, few of whom understand the market. Is gold now just another line in the foreign-exchange business?
Electronic platforms are certainly taking over the day-to-day trading flows. And that risks hurting gold miners if (or when, at the right price) their shareholders lose their revulsion for hedging future output by borrowing gold to sell at today's prices. Because, Tuesday's midday panel agreed, the liquidity simply won't be there for large deals.
Hedging costs have already risen dramatically as the supply of metal for lending has dried up from Europe's central banks, and there's not one bullion bank now able to structure a hedging deal out beyond 3 years, one speaker said.
But as it is, the panel also agreed, the chatter about switching London's "over the counter" market of miner-to-bullion-bank deals to a single, centrally cleared exchange-traded contract in gold forwards would solve a problem that nobody has. Miners don't need it, and it won't provide the depth which still exists in traditional services provided one-to-one. Bullion banks don't need it either, because the gold will still need to be sourced from large holders – again one-to-one – and their borrowing customers do large, lumpy deals infrequently. The tick-by-tick flow of an exchange-traded contract doesn't fit.
On the other side of that business, the "official sector" session at LBMA 2015 gave a quiet, diplomatic hint that European central banks may be more open to providing a little more of their gold for lending for the first time in a decade. Speakers from both the Banque de France and the Oesterreichische Nationalbank (OeNB) – headquartered here in Vienna – noted however that demand is low. Which brings us to back to gold-miner hedging.
The (relative) success of royalty and streaming companies like Royal Gold (TSE:RGL) and Silver Wheaton (NYSE:SLW) maybe opens a way to a sober, sensible discussion of what one speaker on Tuesday called "prudent" hedging – say 15-20% of the next 7-10 years of a miner's production. But as John Reade noted in the closing session, there remains an "almost religious belief" amongst stockholders that hedging can only ever be bad. Because the lesson of the last bear market, when hedging was seen pulling down prices, was followed by the hard lesson of the bull run, when de-hedging the mountain of forward sales made at lower gold prices dented returns.
Meantime, regulation is going to capture non-bank traders – such as gold miners hedging production through bullion-bank forwards and options – making the discussion more complex still, and perhaps forcing other players to quit entirely. And that to the gloomy price outlook, and it's hard not to feel a tiny bit bullish.
Because it's only when a market gets this tough and starts losing participants that the floor might finally be in. The industry making the gold market is certainly being changed in the process.