END_OF_DOCUMENT_TOKEN_TO_BE_REPLACED

If US jobs growth is so strong, why not raise rates like promised...?
NOW it gets interesting, writes Gary Tanashian in his Notes From the Rabbit Hole.
Because early in the bailout process, the Fed talked about achieving certain employment milestones before hiking interest rates. And here we are at the 10th consecutive month with 200,000+ job gains (321,000 in November) and the jobless rate down to 5.8%.
Yet still there is a question on when or whether ZIRP will be withdrawn?
Well I am a visual learner so I for one can never get enough pictures to inform my thinking. Pardon the redundancy in this chart's frequent appearances... 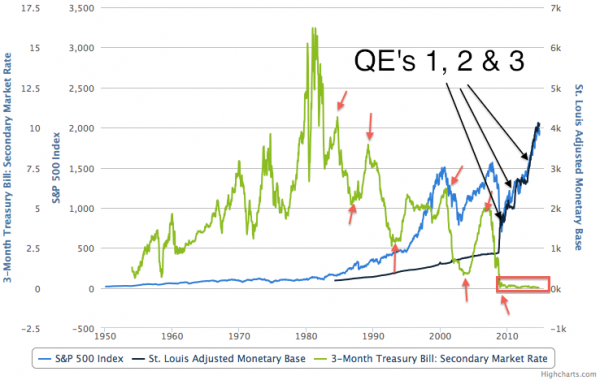 The rectangular red box is zero interest rate policy (ZIRP), which is 6 years old this month. If we play it straight we would be expected to believe what the mainstream believes, that the "Great Recession" is a thing of the past and that something built of abnormal policy can proceed per normal metrics and assumptions when abnormal policy is removed.
I don't buy it. As noted recently, like Agent Mulder "I want to believe". Because frankly being a gold bug or a non-conformist in this environment flat out sucks. As I have noted previously, it is much better for my family's situation if gold goes back to the hell it came from and the US economy really does continue onward and upward, post-policy.
But then I look at the chart above and wonder why the rectangular red box is still there. I wonder why new QE is enacted every time the S&P 500 takes a routine correction or 'Jobs' drop below 150,000.
On that subject, let's move on. From a December 5 New York Times article entitled Big Job Gains and Rising Pay in Labor Data:

"The improving job market finally delivered a sharp jump in average hourly earnings for ordinary workers that was double the anticipated 0.2 percent increase. 'In one line: spectacular and, more to the point, believable,' said Ian Shepherdson, chief economist at Pantheon Macroeconomics. 'We've had strong hiring indicators in a number of surveys, and lower jobless claims, so sooner or later, we were going to get a blockbuster number."

At Biiwii.com I sometimes make fun of the robo quotes trotted out by the mainstream media, but the above is simply a guy telling the truth about what he sees on the surface.

"In economics most things cut both ways, however, and Friday's report was no exception. The steadily improving labor market makes it more likely the Federal Reserve will start raising short-term interest rates sooner rather than later, which could lead to some turmoil in financial markets in the months ahead."

It is called balance, but the US balance sheet is out of whack now in its debt-to-GDP and is still trending toward more debt per GDP unit measure.
Last Friday the Treasury bond market threw up a lung on the short end of the curve (yields spiked), yet the long end was relatively stable. This is in line with an 'as good as it gets' backdrop we have been discussing. The Fed funding mechanism remains at around 0% while less strategic parts of the curve (2-year through 5-year for example) get hammered in yields while 10 to 30 years, where long-term loans that effect economic growth are made, remain stable.

"Some experts now argue that the Fed may move to raise its key interest rate lever as early as March next year, but most are still sticking with midyear."

I would simply ask 'why?' To keep up appearances of being in control? There is no (new and readily apparent) inflation, on which the Fed has a target along with employment. Why risk the worst implications of the chart above? A moral sense of responsibility to savers and paycheck-to-paycheckers, after 6 goddamn years of punishment? Please.
Of course there are always going to be reasons to continue to be cautious about raising interest rates. But I think it is curious how we never see charts like the one above among those reasons. It continues to indicate 'all or nothing' for the Fed's bailout operation.
What we have going is FrankenMarket II and a FrankenEconomy. The US has successfully re-flated using abnormal policy tools and the fallout is something for future hindsight. All I can tell you is that we knew something was wrong with Alan Greenspan's FrankenMarket and this was addressed well in the 2008 liquidation.
At that time the mainstream media were busy extrapolating normal metrics as well. Only after the fact did they put soup lines on the cover of Time magazine and come up with terms like "Great Recession". The "Great Recession" ain't over, but in the developing 'as good as it gets' environment, actively fighting the good stuff can get you killed because the interim boom has been the anti-bust (Heavenly '14 vs. Armageddon '08).

"The November data alone isn't enough to shift the Fed's thinking, said Guy Berger, United States economist at RBS. 'In all likelihood, we will see faster wage growth over the next six months, but as far as the Fed is concerned, one month alone could be noise,' he said. 'Our view now is that the first rate hike will come in June.'"

Or it could come sooner or it could come never. In conventional economics wage growth = inflation as spending drives up costs of goods and services. Wage growth had been a missing ingredient in the positive picture. Will it drive up energy and materials that are currently selling at deep discounts? If so, then commodities are a buy. I have my doubts.

"Although the prospect of higher interest rates tends to make investors more cautious, both stocks and bonds rose modestly on Friday, with traders figuring a better job market and better-paid consumers outweighed whatever cooling effect higher borrowing rates could have."

Higher borrowing rates are antithetical to what has built the recovery, which is the suppression of interest return on debt. Meanwhile, the debt keeps rising right along with the recovery. Talk of rising interest rates means talk of increased debt servicing costs.

"Although government number crunchers try to adjust for seasonal swings like hiring by stores ahead of the holiday, retailing still showed unusual strength, adding 50,000 workers in November. That was more than twice the average monthly gain of 22,000 retail workers over the last year."

Well, it's seasonal but it is also in line with our view above about US 'services' sectors. We will also dutifully watch Semiconductor book-to-bill ratios and form conclusions about future ISM reports based on that. From there, we will indeed use the data as a bellwether on the broader economy. The negative b2b may be the first inkling, but it needs to become a trend before we extrapolate future ISM and economic weakness.
Bottom line, in 2008 the Bernanke Fed instituted a massive bailout of the very financial institutions that wrecked the country. TARP, ZIRP and QE's 1-3 were injected into the economy and have come at the expense of regular people's savings and taxes.
Throw in the genius of Operation Twist, which "sanitized" inflation right out of the picture (as easy as selling short-term T bonds and buying long-term T bonds) and bring it forward to today...

We have normalizing 'jobs' and a normalizing economy. We have normal articles in the normal mainstream media. It's as good as it gets my friends. But it has been created against a backdrop of still increasing debt-to-GDP and that is probably the 'tell' about where all of the policy distortions have roosted. It is only different from the Greenspan inflation in that government credit has largely replaced commercial credit on this cycle...and that it is a much bigger future debit now.