END_OF_DOCUMENT_TOKEN_TO_BE_REPLACED

Bank of Japan has shifted policy...
The BANK of JAPAN has been under clandestine pressure from Trump administration over the past year, writes Gary Dorsch at Global Money Trends.
The White House wants Tokyo to start winding down its ultra easy money policy, as Japan's economy has posted solid growth for eight straight quarters, its longest run in 28 years.
Hiroshi Watanabe, Japan's former top currency diplomat, who retains close contact with international financial diplomats, said the BoJ is struggling to justify its policy of capping 10-year bond yields at zero per cent with the economy in good shape and the job market near full employment.
The BoJ continues to say publicly that its sticking with its ultra-easy money policy, because the rate of inflation is still distant from its +2% target. But everyone knows Japan's reported rate of +1% inflation is "fake news" and is grossly understated by finance officials.
Most importantly, the Trump Treasury is not buying Tokyo's tricks. Watanabe warned:

"Keeping yields at zero for too long could draw US complaints that the BoJ is focusing more on the Yen's exchange rate rather than inflation. The US may not say directly the BoJ is resorting to currency manipulation, but could signal as such. The BoJ should be mindful that at some point, the US Treasury could argue that it's using its ultra-easy monetary policy to keep the Yen weak."

Tokyo has moved to lower the US Dollar's exchange rate from around ¥115 at the start of November '17 to around ¥106 last week.
The US Dollar began its latest descent against the Yen on Nov 6th, 2017, following a speech by US president Donald Trump in which he accused the government of Shinzo Abe of engaging in unfair trade practices on the first leg of his five-nation Asia tour.
"Trade with Japan is "not free or reciprocal...We want fair and open trade. But right now, our trade with Japan is not fair and it's not open. The US has suffered massive trade deficits with Japan for many, many years. Many millions of cars are sold by Japan into the United States, whereas virtually no cars go from the US into Japan," said Mr.Trump. 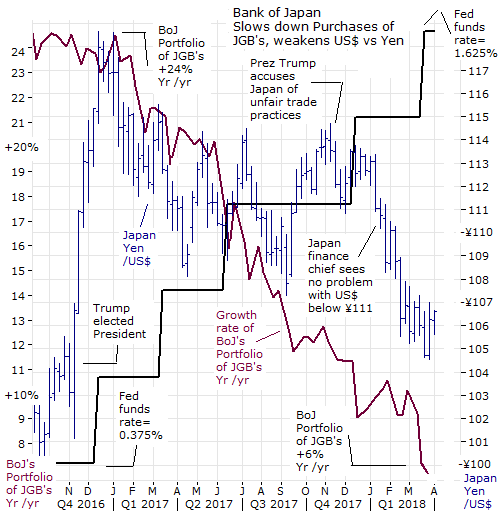 For the US, the trade deficit of -$70 billion with Japan last year was second only to the shortfall of -$375 billion with China. Trump made it clear that he sees the trade numbers as a sort of fairness scorecard, and any figure with a minus for the US almost automatically means the other side is somehow cheating and breaking the rules.
As such, Mr.Watanabe suggests a change in the BoJ's money policy.
Rather than considering its target of zero% for the 10-year JGB yield as a rigid one, the BOJ should communicate in the months ahead, a plan on when and how it could whittle down its massive money printing scheme.
Global markets were shaken last month when Trump moved to impose tariffs on Chinese goods and Beijing threatened similar measures, stoking fears of a global trade war and bolstering demand for the safe-haven Yen. Japanese policymakers worry that Trump could use a similar approach he took against South Korea, which he agreed on a trade pact with a side deal to deter Seoul's devaluation of the Korean Won. The BOJ argues its policy is aimed at hitting its price goal and not at weakening the Yen, though Trump had accused Japan in the past of inflating its "money supply" to devalue the Yen.
Currency traders have noticed that the Bank of Japan has been markedly slowing down its purchases of JGB's compared with a year ago, which in turn, has sparked a Yen rally. The BoJ's purchases of JGB's totaled ¥54 trillion ($508 billion) in the fiscal year of 2017, ended March 31st and compared with an annual guideline of ¥80 trillion under the BoJ's Yield Curve Control scheme.
Despite the steady reduction in purchase amounts, Japan's benchmark 10-year yield has stayed within its target zone of zero% to +10-basis points, with a few upward blips. The BoJ kicked off a rally in the Yen on January 9 when itcut purchases of long term bonds, sparking a slew of bets that its ultra-easy policy could end sooner than expected.
The Yen has strengthened against the US Dollar despite repeated remarks from Governor Haruhiko Kuroda that the BOJ will keep the radical policy intact for as far as the eye can see. The US Dollar continued to slide versus the Yen even as the Federal Reserve was steadily raising short-term US interest rates.
However, the BoJ remains behind its global peers, who are either raising interest rates in Canada, the UK, and the US, or turning toward normalizing policy in the Euro zone, and adding to the BoJ's headaches. FX traders are betting the BoJ will continue to reduce the pace of its purchases of JGB's, and thus, adding to upward pressure on the Yen.
The Bank of Japan has vacuumed up so much of the government bond market – around 45%- that it's left fewer securities for others to buy and sell. On March 13th, not a single 10-year note was traded on exchange according to Japan Trading Co. data. With such little going on in the market, it makes it easier for the BoJ to control the yield curve, with less need for the printing of Yen in order to buy JGB's.
BoJ chief Haruhiko Kuroda said the central bank bought 75% of the JGB's newly issued in the fiscal year ended March 31st.
Traders have to read into the reduction of the BoJ's bond-buying operations a "stealth tapering" of its Quantitative Easing scheme. In turn, the exit from QE is also starting to rattle equity markets around the globe.