END_OF_DOCUMENT_TOKEN_TO_BE_REPLACED

Where the Libor scandal points, policymakers are all too happy to lead...

"MARKETS are so rigged by policymakers that I have no meaningful insights to offer."

That's what Nomura International's Investment Strategist, Bob Janjuah, griped five months ago, writes Eric Fry in The Daily Reckoning. Since then, policymakers have stepped up their market-rigging, while new revelations of past market-rigging have also come to light.

It's starting to feel like the financial markets are all rigging and no ship.

"I am simply stunned that our policymakers seem so one-dimensional, so short-termist, and so utterly bereft of courage or ideas," Janjuah remarked last February.

"It now seems obvious that in response to the financial crisis that has been with us for five years and counting, we are being told to double up on these same policy decisions [that have failed]. The crisis was caused by central bankers mispricing the cost of capital, which forced a misallocation of capital, driven by debt/leverage, which was ultimately exposed as a hideous asset bubble which then collapsed, destroying the lives and livelihoods of tens of millions of relatively innocent people."

When Mr. Janjuah voiced these concerns a few months back, the European Central Bank (ECB) had barely started rigging the sovereign credit markets of Europe by providing hundred-billion-Euro bailouts to the central banks of Spain, Italy and others. 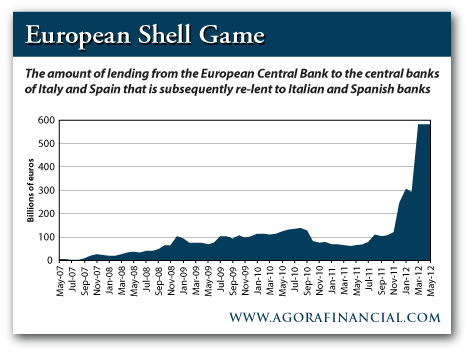 And when Janjuah sulked that he had no meaningful insights to offer, the ECB had not yet announced that it would also rig the private Eurozone credit markets by extending loans directly to European financial institutions, rather than lending money only to Eurozone governments.

And, of course, when Janjuah griped that markets were "so rigged by policymakers" he had no idea that policymakers had already been rigging Libor rates – the very foundation of the global credit markets.

Libor, which stands for London Interbank Offered Rate, may seem like a meaningless financial obscurity to most folks. But this particular obscurity happens to determine the pricing of trillions of Dollars' worth of credit lines and credit derivatives.

Therefore, rigging Libor is a little like rigging magnetic north...or its modern-day equivalent, the Global Positioning System (GPS). Every compass in the world would point to a deception. More importantly, your Paris-bound jet might touch down in Tripoli. And even if your Paris-bound jet touched down in nearby Lyon, you'd still be a little annoyed.

That's right; no one. And that's roughly the same number of folks who would willingly participate in a rigged financial market. Rigging markets is a destructive fraud. Rigging a market as influential as Libor is fraud on an epic scale.

According to recent press reports, only three of the 16 banks that establish the Libor rate have admitted – or sort of admitted – to posting fraudulent Libor rates between 2005 and 2008. But very few filthy kitchens contain just three cockroaches.

Chances are, as the various investigations proceed, we will discover that the number of banks that participated in the Libor-rigging totaled more than three, but probably not more than 16...unless we were also to include central banks like the Federal Reserve and the Bank of England.

That's right – Are you sitting down? – some central banks may have sanctioned Libor-rigging.

According to recent press reports, a few of the 16 Libor-setting banks engaged in Libor-rigging from 2005 to 2008. The motive for their fraud seems to have been nothing more elaborate than pure greed. But during the 2008 crisis, government market-riggers – i.e., central banks – may have gotten in on the act.

Earlier this week, Jerry del Missier, a former executive of Barclays Bank, admitted to manipulating his firm's Libor postings during the 2008 crisis. But he said he did so because "at the time it did not seem an inappropriate action, given that this [directive] was coming from the Bank of England."

Not surprisingly, the Bank of England refutes del Missier's assertion. Apparently, market-riggers prefer to do their rigging privately. Despite this preference for anonymity, however, the policymakers who are rigging various market riggers probably believe their treachery to be in the best interests of Queen and country...and maybe Goldman Sachs. The policymakers seem to genuinely believe that the free markets need them – that free markets would stumble around in the darkness unless policymakers switched the lights on.

But the reality, of course, is that free markets don't stumble around unless some government agency blindfolds them with "policy measures".

"Politicians hold key to recovery: IMF," a Globe and Mail headline declared earlier this week. Yes; it's true! The IMF asserted that the biggest threat to the financial markets is a lack of rigging. "Downside risks continue to loom large," the meddlesome agency declared, "importantly reflecting the risks of delayed or insufficient policy action."

"If you listen to the [policymakers in the US and Europe]," Janjuah griped in February, "it seems that the only solution they can offer up is to yet again misprice the cost of capital, in the hope that, yet again, through increased leverage/debt, we are yet again greedy enough to misallocate capital, which in turn will lead to yet another round of asset bubbles. Such asset bubbles are meant to delude us into believing that we are now 'richer.' When – as they do by definition – these bubbles burst, those who have been suckered in will realize that their 'wealth' is instead an illusion, which in turn will be replaced by default risk..."

Indeed, our illusory wealth is already vaporizing. As reported previously in this space, "The median net worth of families plunged by 39% in just three years from $126,400 in 2007 to $77,000 in 2010. According to the Fed, the financial crisis, which began in 2007, wiped out nearly two decades of wealth – with middle class families bearing the brunt of the decline. This puts Americans roughly in the financial position they were in 1992."

And the list continues to grow. Here in the US, the Fed and Treasury have stalked almost every facet of the credit markets, clubbing any one of them that tries to discover prices without assistance from the proper authorities. The Treasury market is one prominent example.

For many years, the Federal Reserve dabbled from time to time in the Treasury market. But almost never in large size or for very long. After the 2008 crisis, the game changed. The Fed aggressively ramped up its purchases of Treasurys – initially in an effort to provide liquidity to the financial sector and later to suppress interest rates (i.e. fix prices).

The Fed conducted these purchases via its infamous "Quantitative Easing" initiatives, followed up by "Operation Twist." At the end of all this easing and twisting, the Fed became the largest single holder of Treasury Securities – even larger than China, the former #1. 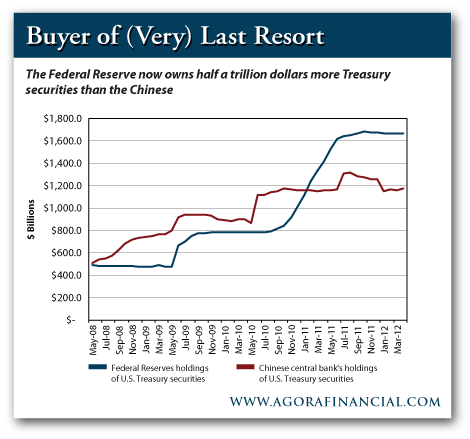 Janjuah feels very certain that this story will end badly. He continues to reiterate this February warning:

"When looking for where the bubbles may be, realize this: in this current cycle, where central bank balance sheets are at the core, the bubble is everywhere – in stocks, in bonds, in growth expectation, in credit spreads, in currencies, in commodity prices, in most real asset prices – you name it! This is why I think that this current bubble, if it is allowed to fester and develop into 2013, will have such widespread consequences when it bursts that it will make 2008 feel, relatively speaking, like a bull market...When this bubble bursts, I don't think there is an easy way out. Who will be the bailout provider?

"The longer we have to wait for the final resolution to the global financial crisis," he concluded, "the bigger and more devastating the final leg lower will be. I have an extremely high level of conviction on this point... My personal recommendation is to sit in gold and non-financial high quality corporate credit and blue-chip big cap non-financial global equities. Bond and currency markets are now so rigged by policy makers that I have no meaningful insights to offer, other than my bubble fears."

Don't be so hard on yourself, Bob. Fear is a "meaningful insight".

Buy and sell physical gold and Silver Bullion – at your price, in free competition – using the world's #1 bullion market for private investors, BullionVault...