END_OF_DOCUMENT_TOKEN_TO_BE_REPLACED

Try none of the above vs gold...
ITALY proves yet again how a true crisis strikes, writes Adrian Ash at BullionVault.
Very, very slowly...and then all of a sudden at once.
"We were not in the midst of a sovereign debt crisis, Brexit, subprime etc," tweets Democratic Party politician and former economic development minister Carlo Calenda.
"Deficit was under control, growth was there, banks finally okay...
"And yet we decided to provoke a financial crisis for ourselves with the ravings of League and M5S. Real crazy stuff."
Clearly though, Calenda's happy world before the Fall didn't exist. Because the "ravings" of big-spending, tax-cutting Eurosceptics wouldn't have appealed if it did.
Result of the electorate's choice? Pretty much as soon as the 5-Star Movement and League Party coalition started naming their ministers, "Short-term Italian bonds today suffered their biggest 1-day jump in 26 years," said Kirsty Wark, anchor of the BBC's flagship Newsnight on Tuesday.
She meant bond yields of course...not the bonds themselves. But who cares about how the markets actually work? Just feel the financial panic! 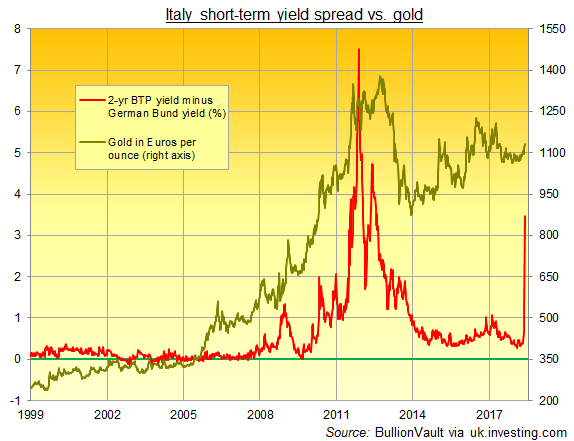 The 2-year BTP had in fact more than halved in price on Tuesday. Over the last 3 weeks it has lost 95% of its value.
That is what took 2-year Italian yields up from below zero...that weird netherland where investors pay governments to lend them money...shooting to 2.72% per annum at the sudden peak of this sudden political crisis.
Still, no need to worry. Because the European Central Bank is on the case.
"No central bank would act on the back of the events of a few days," Reuters quotes one source at the ECB.
"Indicators [are] not yet showing signs of stress among [Italian] banks," the source added.
Anyway, "the central bank [does] not have the tools."
And besides, it lacks "[a] mandate to solve what [is] essentially a political crisis."
The wonks of Frankfurt, in other words, have got everything under control as only they can. Thanks to their cold-eyed expertise, you can also be sure that petty politics play no part in the ECB's response either.
Oh, right...
"As long as anti-European Union rhetoric is present amongst [Italy's] populists," reckons investment strategist Seema Shah at asset managers Principal Global, " ECB intervention is unlikely and Italian assets will remain under pressure."
Put another way, "Italy knows the rules. They might want to read them again," as out-going ECB vice-president Vitor Constancio told Spiegel magazine Tuesday when asked whether Frankfurt would step in to support the price of Italian bonds.
Call it " conditionality", just like the ECB did in 2012 when Italian bond yields last stood this high. You do what you're told, and we'll print the money.
"The markets will teach the Italians to vote for the right thing," added EU commissioner Günther Oettinger in an interview with DW on Tuesday.
Or rather, he didn't. Oettinger merely said something like it...and DW's journalist tweeted a clumsy translation...forcing Oettinger to apologize for something he didn't quite say...while the journalist deleted his tweet and apologized for "not faithfully relaying [his] words."
"Even now," the hapless commissar actually said about the possibility of another election if Italy's debt-spending coalition of Eurosceptics cannot form a government, "developments on bond markets, the market value of banks, and [around] Italy's economy in general have darkened noticeably and negatively.
"That has to do with the possible government formation. I can only hope that this will play a role in the election campaign and send a signal not to hand populists on the right and left any responsibility in government."
The markets, in short, cannot be ignored. They will "play a role", and they don't much like the mush of left-wing 5-Star Movement and right-wing League Party which no-one in Italy voted for but which everyone got anyway thanks to the fastest enemy-to-friend turnaround since Northern Ireland's 'chuckle brothers'.
Step forward EC president Jean-Claude Juncker to trip his colleague Oettinger into the path of the populist bus. Speaking in the third person, he told his press team to say that "President Juncker is convinced that Italy will continue on its European path...[that] Italy deserves respect...[and] to put on record his conviction that Italy's fate does not lie in the hands of the financial markets."
An odd thing to "put on the record" perhaps. Unless you feel the record will need reminding of what you felt in the future. Which it might.
Servicing Italy's existing debt mountain is already set to cost 35% of annual GDP over the next 2 years, according to the ECB.
That compares to 25% for France, 28% for Spain, and just 17% for both Germany and Greece – Athens of course being 'blessed' by the recurring bail-out starting 2010.
As for Italy, even its Eurozone-leading debt costs are something of a result for the Dipartimento del Tesoro, thanks to both the "fiscal adjustment" imposed since the financial crisis (aka the 'austerity' which just helped put the M5S and Lega in power) plus, as Il Sole 24 Ore notes, "the low interest rates resulting from the 'expansive' monetary policy" of the ECB.
"Expansive" hardly says it. 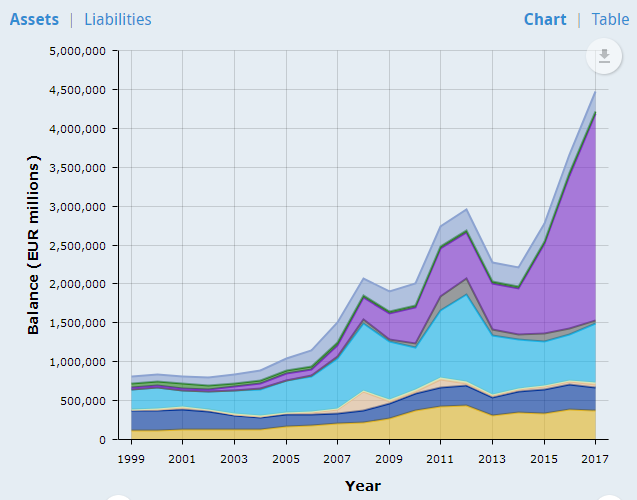 Together, austerity and the ECB have helped the Treasury in Rome " reduce interest spending on Italy's massive debt at the end of 2017 by around €19.6 billion compared to 2012," the paper goes on.
But now the people have spoken and the dreaded markets have hiked the cost of borrowing, taking those short-term rates above zero and making it way more expensive to raise new funds to repay and service old debt, never mind cut tax and boost spending like Lega-M5S promise.
What next? Everyone says the market shouldn't dictate what the voters do. But yes, Italy will still need to borrow from the market. And meantime no – if Italy wants to shrug off the market and vote for a surge in deficit-spending, the ECB will not step in to save the Eurozone's third largest economy...and its No.1 debtor...from having to pay higher rates.
Well, not yet at least.
"The 2005 relaxation of the Eurozone's Growth & Stability Pact, which was supposed to underpin the integrity of the currency, was good news for gold," noted fund manager John Hathaway at Tocqueville way back before the financial crisis blew up.
"Within two months, gold broke above the supposedly impenetrable threshold" against the Euro at €350 per ounce. It's never looked back.
With the banking crash then threatening nation-state solvency across Europe 7 years later, Mario Draghi breached another impossible rule...and vowed to "do whatever it takes" to preserve the currency union. That meant "printing whatever it takes".
You can see the effect of Mario's soothing balm on Italy's BTP yield spread on our chart at the top. It also calmed the gold price. Bullion set a new all-time Euro high that very day, slipping pretty much non-stop for the next 2 years.
Now in 2018, and on the cusp of another voter-versus-Euro-rules showdown, the gold price in Euros trades at more than €1100 per ounce, beating pretty much any stock market you can name, never mind any currency or major commodity, since the eve of the financial crash.
If the voters of Italy won't do as they're told, we guess they'll tell the Eurozone what it must to do to preserve the union. Yet again, that will no doubt mean further monetary largesse from the ECB, just as soon as the threat of Euro break-up overcomes German resistance once more, and Italy's voters again accept what are so laughably called the "rules".