END_OF_DOCUMENT_TOKEN_TO_BE_REPLACED

The U.S. ECONOMY is growing at one of the fastest rates in the developed world right now, writes Frank Holmes at US Global Investors.

Unemployment has meanwhile hit a nearly 50-year low of 3.6% in April.

Under normal circumstances, this should boost demand for domestic equities. Some investors, however, are hesitant to participate due to escalating trade tensions between the US and China, among other factors.

The latest fund flows report from Morningstar shows that investor appetite for equities has declined so far this year in favor of asset classes that are perceived to have less risk, including government and municipal bonds.

What's more, economic data points to a slowdown in parts of Europe and Asia. The Eurozone Manufacturing PMI registered a six-year low of 47.5 in March, while China's manufacturing sector is expanding only marginally.

This is expected to impact large US-based multinationals that do a significant percentage of their business overseas. (In 2017, Intel topped the list with foreign sales accounting for 80% of total sales, followed by food and beverage maker Mondelez (76%) and Coca-Cola (70%).)

Many investors may wonder, then, how they can get access to the robust US economy and strengthening Dollar while limiting their exposure to shrinking global trade and a potentially slowing economy outside of the US

A possible option could be small to mid-cap stocks, which are generally tied more closely to the domestic market than their blue-chip peers.

Not only are small and mid-caps more insulated from protectionist policies such as tariffs and stricter trade barriers, but they're also supported by a stronger US Dollar. This week, the Dollar tested its 52-week high, set in late April, and is currently trading above its 50-day and 200-day moving averages. 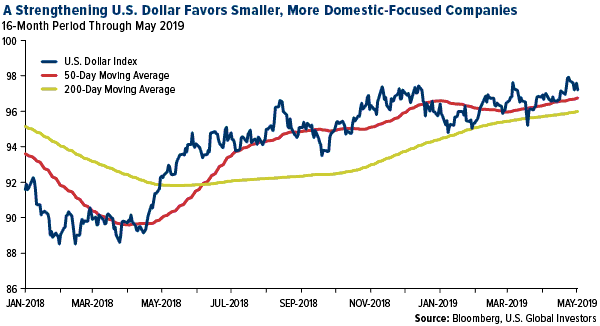 A strong greenback acts as a headwind to multinationals that do a lot of exporting, the reason being that American goods and services become more expensive to international markets.

Conversely, a stronger Dollar supports smaller but high-quality, dividend-paying firms whose revenues are more likely to come from inside the US than overseas.

"A resurgence in the Dollar potentially bodes well for one group that has struggled to reclaim record territory after last year's rout: small-cap stocks," the article reads. It also adds that smaller companies likely stand to benefit from the Federal Reserve's freeze on additional interest rate hikes.

Indeed, small-cap stocks have not fully recovered from the market selloff in the fourth quarter, unlike S&P 500 companies. As of May 8, the Russell 2000 Index was still around 9% lower than its all-time high in late August. The S&P, meanwhile, rocketed back up to record levels before hitting resistance from President Donald Trump's recent announcement that he was considering raising tariffs even higher on China-made goods. 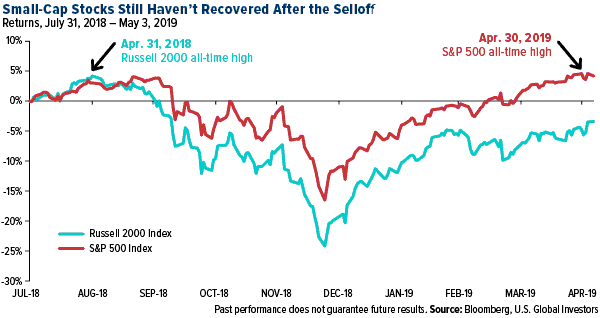 I think this creates an attractive buying opportunity for small and mid-caps. Dollar strength and trade friction could very well prompt investors to rotate out of large-cap multinationals in favor of their smaller peers, which have a performative advantage over blue-chips anyway.

They've also historically outperformed large-cap stocks in most rolling 20-year periods, according to legendary investor James O'Shaughnessy, author of the essential What Works on Wall Street and The New Rules for Investing Now.