END_OF_DOCUMENT_TOKEN_TO_BE_REPLACED

And from major names in money management, too...
A FEW legendary influencers in investing are making huge bets right now on commodities, writes Frank Holmes at US Global Investors, an area that's faced – and continues to face – some pretty strong headwinds..
What are we to make of this?
Famed hedge-fund manager Stanley Druckenmiller made a $323-million bet on gold, now the largest position in his family office fund. It's also come to light that George Soros recently moved $2 million into coal producers Peabody Energy and Arch Coal. Meanwhile, activist investor Carl Icahn took an 8.5% position in copper miner Freeport-McMoRan, which we own.
These giants of the investing world have just given huge endorsements for gold, coal, copper, and precious metals
My friend Marc Faber, the widely-respected Swiss investor and editor of the influential Gloom, Boom & Doom Report, is now plugging for the mining sector and precious metals. Speaking to Bloomberg TV last week, Faber claimed that investors are running low on safe assets and suggested they revisit mining companies:
If I had to turn anywhere where...the opportunity for large capital gains exists, and the downside is, in my opinion, limited, it would be the mining sectors, specifically precious metals and mining companies...like Freeport, Newmont, Barrick. They've been hammered because of falling commodity prices.
Now, commodities may still go down for a while, but I don't think they'll stay down forever.
Late last month, Freeport became the first major miner to announce production cuts in response to depressed copper prices, which have slipped around 19% since their 2015 high of $2.95 per pound in May. This reduction should remove an estimated 70,000 tonnes of copper from global markets, according to BCA Research, and eventually help support prices.
Platinum and palladium miners in South Africa, a leading producer of both metals, also announced job cuts and mine closures, as platinum has slipped more than 16% this year, palladium a quarter.
But Marc sees opportunity, as I do. In my keynote speeches earlier this year I suggested that 2015 would see a bottom in cost-cutting due to divesture and slashing of capital expenditures, and that in 2016 we should see higher returns on capital.
Furthermore, using our oscillators to measure the degree to which asset classes are overbought and oversold, we find that commodities are extremely oversold right now and currently bouncing off low negative sentiment. The smart money is buying.
When asked if he thought commodities had reached a bottom, Marc had this to say:
I would rather focus on precious metals – gold, silver, platinum – because they do not depend on industrial demand as much as base metals and industrial commodities.
Marc was referring, of course, to China, the 800-pound commodity gorilla, as I've often described the country. The Asian powerhouse is currently responsible for nearly 13% of the world's commodity demand, followed by the US at a little over 10%. 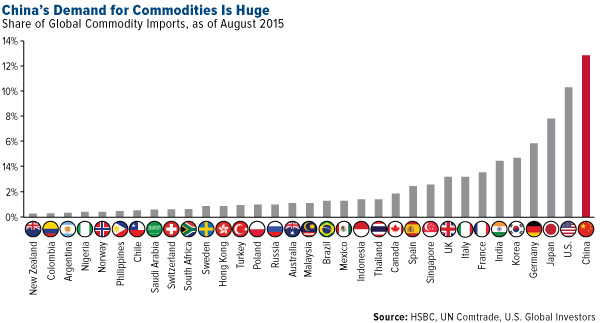 But as I discussed recently, China is transitioning from a manufacturing-based economy to one that emphasizes services, consumption and real estate. Commodity demand is cooling, therefore, and we can expect it to cool even further. Aside from the strong Dollar, this is one of the key reasons why prices have plunged to multi-year lows.
The J.P.Morgan Global Manufacturing PMI continues to decline as well. Since its peak in February 2014, the reading has fallen 4.5%. The August score of 50.7, just barely indicating manufacturing expansion, is the sixth consecutive monthly reading to remain below the three-month moving average.
I've shown a number of times in the past that when this is the case – that is, when the one-month reading is below the three-month trend – commodity prices have tended to trade lower. Unlike other economic indicators such as gross domestic product (GDP), the PMI is forward-looking and helps investors manage expectations. Based on our own research, there's a strong probability that copper and crude oil prices might dip three months following a "cross below".
The opposite has also been true: Prices have a stronger probability of ticking up three months after the one-month crosses above the three-month. 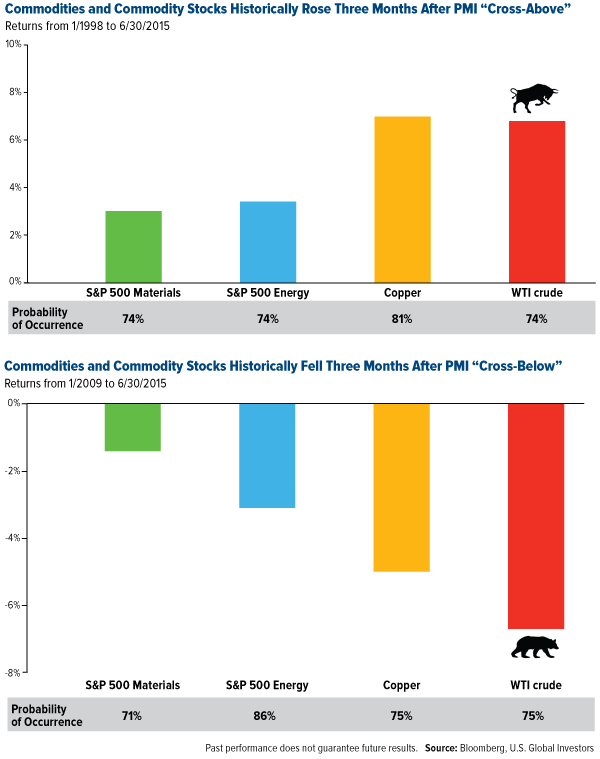 This is why we believe prices will have a better chance at recovery after the global PMI crosses above its three-month moving average.
I have great respect and admiration for Druckenmiller, Soros, Icahn and Marc – all of whom are clearly bullish on commodities – but we would prefer to see global manufacturing growth reverse course.
In the meantime, low commodity prices are a windfall for many companies in Europe, Japan and the US Metals and other raw materials are at their lowest in years, which is the equivalent of a massive tax break for the construction and manufacturing sectors.
Low gold prices are also expected to generate high demand in India as we approach fall festivals such as Diwali and Dussehra, not to mention weddings. According to estimates from Swiss precious metals refiner Valcambi, demand could reach 950 tonnes by the end of the year, compared to 891 tonnes in 2014.
One factor to watch is manufacturing activity. It might be challenging for the global PMI to cross above the three-year moving average since Chinese manufacturing has slowed, but there's burgeoning strength in other emerging markets, many of them unexpected: the Philippines, Myanmar, Ethiopia. The Czech Republic has the highest PMI reading among emerging Europe countries and the fastest-growing economy in all of Europe.
An interesting chart from Morgan Stanley suggests that emerging markets might have found a trough and are ready to turn up. Assuming that August 24, 2015 was the bottom, the bank compares the recent bear market to five previous ones and finds that it's tracking a similar price action as 1995, 2002 and 2011. It's also much less severe than 1998 and 2008. 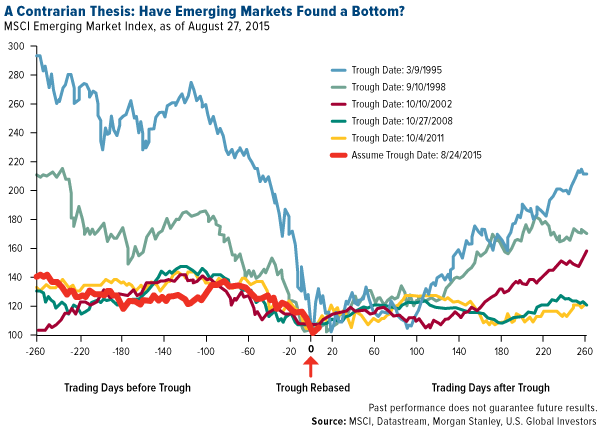 Additionally, Bloomberg reminds us that by 2050, 3 billion people will enter the middle class, nearly all of them in the developing world. Emerging markets might be struggling somewhat right now, but they're still very much our future.