END_OF_DOCUMENT_TOKEN_TO_BE_REPLACED

Counting the inflationary losers and investment winners in the Great Solvency Slump of 2008...

YOU DON'T NEED to be a rabid libertarian or Marxist historian with leather patches on his elbows to look at the current world banking crisis and ask "Cui bono...?"

"Who benefits?" as the criminal lawyer demands of the jury. And funnily enough, at first glance at least, the lawyers look set to clean up yet again.

"Investors and their lawyers filed 70 securities-fraud class actions in the first quarter," reports Conde Nast's Portfolio.com, "almost the same number that were filed in the first half of 2007, according to NERA Economic Consulting, which tracks the filing of these complaints."

Twenty-six of the 70 new cases in 2008 to date are linked to the sub-prime disaster, with Bear Stearns cited alongside J.P.Morgan, Lehman Brothers, T.D.Ameritrade Morgan Stanley and 14 other firms.

"The increase in filings continues a trend that began in the second half of last year," says Portfolio.com, quoting NERA. "That spike pushed class-action filings up 58% in 2007, compared with the year earlier. Plaintiffs filed 207 cases last year, versus 131 in 2006."

So not for the first time (nor the last, no doubt), we're left yet again here at BullionVault wishing that legal firms were listed stocks, rather than private partnerships! Outside the courts, is there anyone climbing ahead on this mass of defaults, missed margin calls, foreclosures and lost jobs?

Investment bank staff are already pretending they've had a round-the-world trip planned for this summer since, oh, since they realized investment banking wasn't for them anyway. Latest estimates in the City of London put the losses between 6,500 and 30,000 by autumn next year – almost twice the kill-rate of the Tech Stock Crash.

Over in the plush hedge-fund suites a mile or two west in Mayfair, Plexus Partners lost one-third of its value since January after screwing up its arbitrage trades. Another crazy-named hedge fund – Polygon – has tried to stop its investors withdrawing their cash to defend its future. And sticking to English, rather than Latin, failed to save Russell Investments in New York from closing two of its three hedge funds this week. They dumped two-thirds of their value inside six months.

Only global-macro hedge funds showed any real gains so far this year, according to Hedge Fund Review, returning an average of 11.5% in the first 10 weeks. But given they've had to wait six years for a decent surge (at last!) in asset-price volatility to start attracting new business, it hardly seems worth the bother.

Sitting tight at the other end of that see-saw called risk, meantime, cash savers made a little on interest rates thanks to the "dash for cash" by banks across the world, but they gave it all back to inflation and sleepless nights, even with Federal deposit insurance sitting behind the first $100,000 of potential losses.

Money-market fund managers did well to start with, but new savers turned tail last week, reports Forbes, sucking out $7.2 billion as stories spread of fund values slipping below the dollar. Higher-return funds like Schwab's YieldPlus got caught in a "death spiral" of plunging asset prices, says the Motley Fool. And now the annualized yield offered by apparently "interest-bearing" six-month CDs ticked down from 1.95% to 1.87% this week, says BankRate.com.

Don't all rush at once!

Okay, so Treasury bond buyers made a capital gain as banking stocks and corporate debt collapsed, but only in return for wildly negative yields after inflation. Stock traders won some, lost some, and came out of the first quarter well below zero. And cash debtors – those poor schmucks underpinning this whole mess – made a little watching inflation eat into their principal, but they hit serious trouble refinancing their loans.

Here in the UK, the number of mortgage products on offer slumped by one-fifth at the start of April says one estimate. Home-loan brokers got to work and found some 1,000 offerings had vanished. Last week then saw First Direct suspend all new mortgage lending, claiming it was overwhelmed by applications for its 5.0% fixed-rate deal – which is precisely where the Bank of England's key lending rate will end up in May if not April.

So central banks can't control interest rates, while private banks aren't winning either. Nor are their customers, shareholders or managers. Even the early beneficiaries of the credit crunch (or rather, the "solvency slump") got whacked for 10¢ in the dollar between mid-March and April Fool's Day when commodity prices sank at their fastest pace since the early 1980s.

Is nobody set to make a profit from this mess? Food-price inflation threatens social unrest in 33 emerging economies worldwide, said the World Bank this week. Yet even traders caught holding soybean futures as March went out like a lion got eaten alive!

"Arabs without oil hard hit by food price spiral," confirms Reuters, quoting a dry-cleaning manager in Damascus, Syria. "Even parsley, which has been dirt cheap for as long as I can remember, has tripled," the laundry-man went on.

But with the CRB-Reuters commodities index losing more than 10% inside a fortnight, it's almost enough to make you question the future of this truly historic bull market.

Thank heavens we've got the Fed to sort everything out! 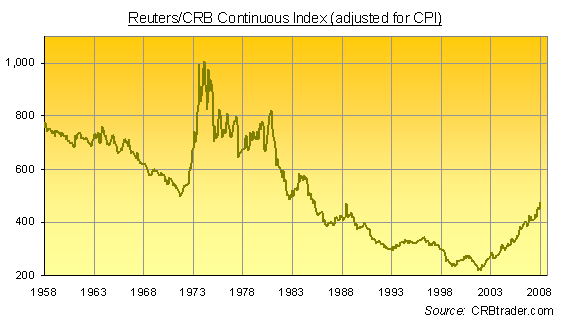 The up-swing in world commodity prices starting at the turn of the century might just get killed by the global banking crisis.

Might just. But somehow, we think it unlikely. Because the runaway inflation in debt running to 2007 – securitized, collateralized, leveraged, you name it (or hire a PhD to name it for you) – created not only a boom in complex financial contracts, ripe for the lawyers to pick over today. It also created a very weird situation, historically, in the cost of living.

"In real terms," as Dr.Marc Faber explained on Australian TV in late Feb., "let's say inflation-adjusted commodity prices in the world peaked out in 1974. Then they went down until 1999 to 2001.

"So [it was] more than a 20-year bear market in commodities," explained the Swiss fund manager and editor of the Gloom, Boom & Doom Report, "at which time commodity prices inflation adjusted in real terms were at the lowest level in the history of capitalism, some 200 years.

Along with crude oil and base metals came natural gas...and then grains as bio-fuel production ate into food production...followed by rice and soybeans, gaining almost one-third since the start of this year. The cost of pork in China – a major staple for protein-hungry consumers – has risen more than 60% after a serious of New Year snowstorms.

"Normally commodity cycles last 45 to 60 years from peak to peak," says Faber. "We occasionally call them Kondratieff's." But you don't need to study or believe obscure Russian economists to spot that a flood of cheap money – the runaway inflation which took US house prices skywards and pumped Wall Street full of toxic junk – helped set fire to commodity prices.

Cheap money kept the US consumer consuming during the recession of 2001. It kept British home-buyers buying – not least as "buy to let" investors – even as price-to-income ratios broke new all-time records. It kept Chinese factories stoked with new orders, hedge funds stocked with call options, and the oil-rich kingdoms of Arabia stoked with architects building desert islands in the sea and mile-high office blocks in the desert.

And now? No one wants to let this bubble deflate. Not Ben Bernanke, his colleagues in Europe, their clients in Frankfurt and the City, the Treasury, all three US presidential candidates, stockholders, the mortgage banks or the over-indebted consumers sat underneath the entire heap of credit – securitized, collateralized, leveraged, you name it – with no hope of repaying.

Hence the solution to the last decade's debt bubble; beating deflation with yet more inflation. Which is hardly a challenge to the bull market in commodities. 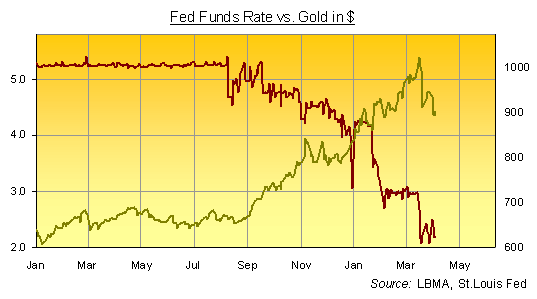 See how Gold Prices leapt when the Fed first got busy cutting its rates back in August?

There's no guarantee it will happen next time. But the same thing happened during the last "Deflation Crisis" in the US economy, back when Alan Greenspan and his No.2 – a young Ben Bernanke – slashed the cost of dollars down to 1%.

Cheap money's worth what cheap costs, of course. And choosing to Buy Gold before the trouble really got started still looks a smart move, some 38% higher inside seven months.

The blow-off above $1,000 may never be seen again, it's true. But with rates heading down – and inflation rising – we'll look to hold gold just in case this "solvency slump" keeps throwing out losers.

Curious to note, but across the European Union as a whole, producer-price inflation hit the "new EU" nations of Romania, Bulgaria and Hungary hardest. Outside these former communist states, the biggest year-on-year price increases hit those economies with the heaviest consumer debt burdens – Belgium (+8.9%), the Netherlands (8.8%), the United Kingdom (8.3%) and Denmark (+13.5%).