END_OF_DOCUMENT_TOKEN_TO_BE_REPLACED

Despite what the Bank of England may say, higher inflation is NOT temporary...

FOLLOWING September's shocking inflation numbers, savers could be forgiven for being skeptical about Sir Mervyn King's claims that inflation will soon drop sharply and that deflation is a greater risk than inflation, writes Simon Rose of Save Our Savers.

The direction of inflation was the topic of a talk given last Thursday by Dr. Andrew Sentance, a former member of the Bank of England's Monetary Policy Committee who often disagreed with the majority opinion. What follows is a summary of his speech.

The MPC's remit is rightly to maintain price stability but the MPC has been reluctant to take action to keep inflation to its 2% target. Despite the views of the Bank of England and the MPC, current inflation is not temporary. An increasingly prevalent view is that it is a good thing that the MPC are turning a blind eye to inflation. This is dangerous. Since the early 2000s, CPI inflation has been drifting upwards, albeit with fluctuations while, from 2008-11, it has averaged 3-4%. 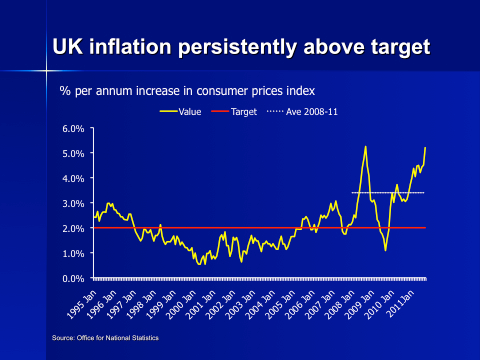 The MPC originally did a good job of keeping inflation to target, beginning with the RPIX target of 2.4% (1997-2003) and then the CPI target of 2% (until the end of 2007). Since 2008, however, things have gone awry. The myth that has grown up is that if something happens in the global economy there's nothing we can do about it. This was not the attitude when the global financial crisis hit. Unfortunately the MPC has a worryingly asymmetric reaction to global phenomena. When global growth rebounded strongly in the second half of 2010 and early 2011, the MPC did not react – as it should have – by tightening policy. As a result, while the average rise in consumer prices in the Euro area and the US since January 2008 has been 7%, in the UK it has been 14%. 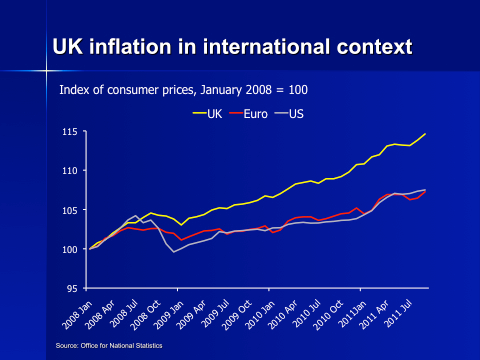 There are three domestic factors influencing inflation: the drop in sterling; the stubbornness of services inflation; and the limited spare capacity in our economy. 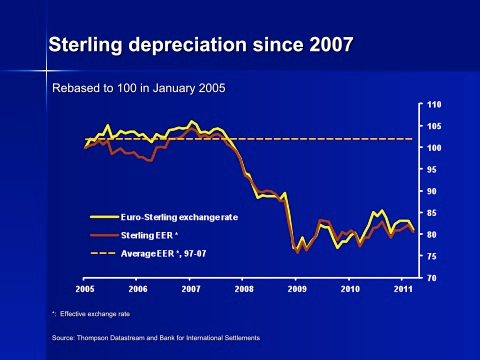 The MPC has a target for inflation. But it has chosen to interpret the target as its forecast for inflation and these forecasts have been very badly wrong. The MPC places a very heavy emphasis on the output gap above all other factors. As has been said, it has an asymmetric response to the economy. As soon as it weakens, they move quickly to inject more QE yet they are unwilling to counter upward pressure on inflation. The Bank should have raised rates in the second half of last year and early this year but it did not.

MPC forecasts give too much weight to spare capacity. As a result, the target becomes a growth target, not an inflation target. The bank has a poor record of forecasting inflation and does not take enough account of sterling.

"Our objective must be to steer the UK economy slowly back to a position of more normal interest rates and lower budget deficits. With a lower level of sterling and a credible plan to reduce the fiscal deficit over the medium term, we were on track. But the problems in the Euro area and the marked slowing in the world economy have lengthened the period over which a return to normality is likely."

King talks at length about the objective of monetary policy but not once does he mention the importance of price stability or inflation. 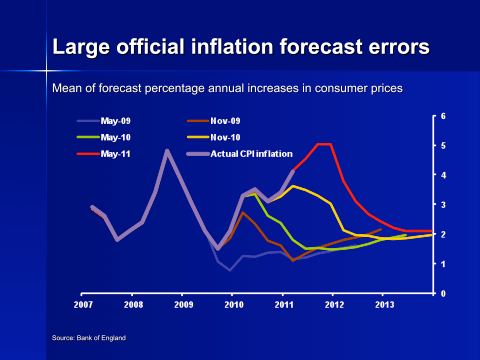 Dr. Sentance concluded with some suggestions for reforming the MPC:

When questioned afterwards about raising interest rates, Dr. Sentance said he felt now was not quite the right time. "Rather, I would be looking for an opportunity next year when global economies will pick up. I do believe we should have raised interest rates but to make a big U-turn now might be wrong." He thought, however, that the MPC should be preparing the ground for an interest rate rise. He also made the point that small and medium-sized companies are over-dependent on bank finance.

We often accuse members of the MPC of being out of touch with ordinary people, particularly savers, but that appears not to be the case with Dr. Sentance. When he was on the MPC, he rang his mother shortly after a sharp cut interest rates, only to be told: "I'm not sure I should be talking to you."