END_OF_DOCUMENT_TOKEN_TO_BE_REPLACED

"We didn't abandon inflation targeting. It abandoned us..."

TIME WAS that central banks targeted and fretted over keeping their currency stable against the Dollar.

But as the Dollar-led inflation of 1950-1980 destroyed the value of bonds and savings worldwide – and then destroyed equities, as well as any sober hope of business and hiring plans – policy-makers tried to target instead the volume of cash flowing around their domestic economy.

Monetarism in turn fell apart as first the mid-80s "super Dollar" and then globalized deregulation of finance pulled the various "M" aggregates down, up and finally out of the window. "We didn't abandon the aggregates," says one practitioner in Steven Solomon's 1995 book The Confidence Game; "they abandoned us."

Central banks already had a new hope at hand, however. But now that theory – inflation targeting – is falling apart after almost 20 years of apparent success. And so the monetarists are back, in practice if not in policy statements.

What else do you think "quantitative easing" aims to achieve if not easier quantities of cash flowing from banks to business and households? And how can inflation targeting – whether explicit as in the UK, or generally guessed to be the chief aim, as in the United States – possibly survive this crisis given the failure of policy-makers to either hit target or reduce volatility? 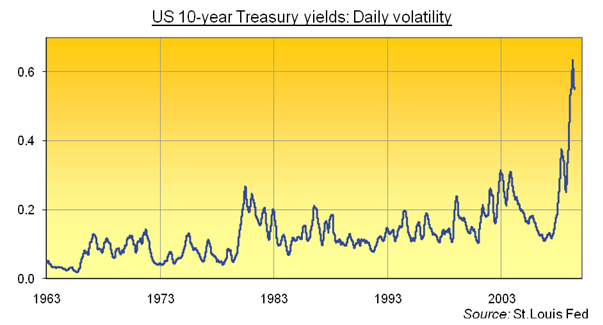 It's not simply the impact of monetary policy on consumer inflation which has gone "off message" in 2009.

Extending their remit – and now hoping also to control longer-term interest rates as well as overnight money rates in the "open" market – central banks are signally failing to cap either the yield or volatility of long-term government bonds. The 10-year US Treasury bond, formerly the financial world's modern "Gold Standard" equivalent – has never offered such wide-swinging returns.

Most disastrous for policy wonks pulling this lever and pushing that button, you have to go back to the Great Depression – when central banks still nailed exchange rates and the volume of money to a tightly supplied quantum of Gold Bullion bars – to find uncertainty about quite where the cost of living will stand running this great, this fast. The month-on-month rate of change in US consumer prices has been three times as vicious since December as the CPI's previous six-decade average. Here in the UK, consumer-price inflation has now overshot the official 2.0% target for 20 months running, even as the previous measure of living expenses – the Retail Price Index – has sunk below zero.

"We didn't abandon the inflation target," the Bank of England will no doubt declare. "It abandoned us..." 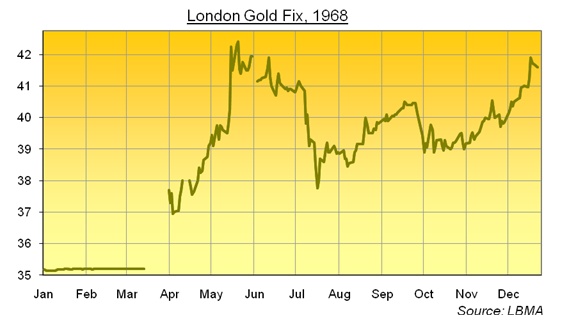 Thing is – and as with any social experiment, such as the London Gold Pool's attempt to cap the price of gold in Dollars at $35 an ounce, finally abandoned in March 1968 – trying to observe as well as influence the "out-turn" of inflation means neither task is done very well, if at all.

Promising to buy and sell gold in the "open" market at a fixed price lower than private traders would bid, the Gold Pool only invited fresh pressure on their fast-shrinking stockpiles. Defending that $35 price – itself arbitrarily set by President Roosevelt at a series of jovial breakfast meetings three decades before – showed the absurdity of any particular fixed value for gold in a world awash with money.

Now in 2009, and slashing rates towards zero to try and force savers out of cash and boost new mortgage debt, the Bank of England has itself caused those sub-zero readings on the Retail Price data – the very opposite of what it set out to do. Because those numbers include mortgage-interest payments each month. Whereas the Bank's mandated target of 2.0% is pegged against the mortgage-less Consumer Price index. And on the logic of that measure alone, not least with oil prices about to start pushing higher on the year-on-year figure as the spike of July '08 fades from the series, interest rates should in fact now stand higher, rather than encouraging yet further hikes in the cost of living.

What to do? At this pace, we'll all join the Swiss in quietly setting targets for foreign exchange rates and ranges, hoping to side-step deflation at the expense of our neighbors' overseas exports. Already in March this year, the Bank of England's Spencer Dale cheered the fact that "the marked depreciation in Sterling should support demand, both at home and abroad, for domestically produced output." But that exchange-rate gain was swiftly undone as the Pound then raced back towards $1.65 to the Dollar, knocking 18% off the Gold Price in Sterling and widening the UK's trade deficit to £7.0bn in April from March's eight-year low of £6.5bn.

How to escape this policy nightmare? Besides yet more volatility, we guess here at BullionVault that only one thing is certain. Central bankers scrabbling around for a new "Hey! This might work" policy to square the circle of full employment with low, stable inflation are guaranteed not to apply a fixed limit on the absolute volume of cash, as set by some implicit if not official Gold Standard.

Sure, if policy-makers, politicians and the rest of us would only abandon the hope of costless inflation, then yes – a Gold Standard might well appeal. But the promise of above-average wealth for everyone makes yawning debt a necessity, and that makes a commodity-linked supply of money untenable. And anyone who tells you otherwise needs to review not only the one policy lesson taken away by every economic advisor who's studied the Great Depression, but also how unstable the "stability" of precious-metal standards proved in practice beforehand.

Digging deep in the archives three decades ago, Professor Roy W.Jastram of the University of California at Berkeley found that – while relatively constant across broad sweeps of history – holding gold even amid a Gold Standard didn't do much to smooth short-term volatility in prices.

As the table above shows, taken from Jastram's analysis of "the English experience" across 366 years, neither silver or gold overcame shorter-term shocks to the cost of living, typically driven upwards by war. Indeed, the post-Gold Standard inflation of the 20th century proved the only exception. Precious metals rose ahead of the cost of living, gaining real value as the value of money diminished and commodities leapt. Whereas until the end of first the Silver, then bi-metallic and finally Gold Standard in the mid-1930s, it was deflation which boosted the real purchasing power of precious metals – then, unlike now, hard cash you could take to the shops and exchange at the bank.

Quite what this means for central bankers now seeking the next number to chase in their monthly meetings, we neither know nor care. But for private investors seeking a little stability in their own savings and wealth, the one certainty remains vicious, violent changes in value, no matter what digit on what metric is chosen.