END_OF_DOCUMENT_TOKEN_TO_BE_REPLACED

PEOPLE BUY GOLD when they fear inflation ahead. But they also buy gold when inflation arrives and starts eating into their savings – which is just what it's done during the last decade. 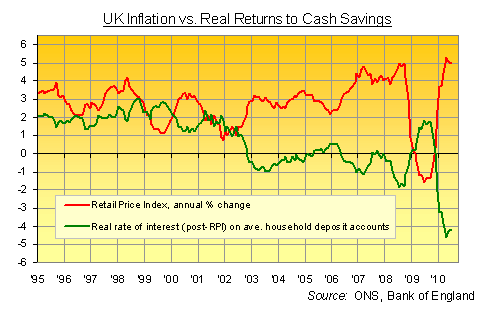 Pity the poor UK cash saver, for instance. Oh sure – the London press pretty much agreed that "inflation eased off" when the latest data were released on Tuesday.

But as Bullion Vault never tires of reminding people, it's crucial to put such a "dip" into context, starting with its impact on real rates of interest...

Real returns to cash aside, however, this apparently "gentle" inflation isn't just hurting savers – those rentiers whom John Maynard Keynes longed to euthanize, and whom his self-declared reincarnation Paul Krugman thinks should be forced to spend! Spend! SPEND!

New data today showed UK unemployment dipping slightly to 7.8% in May, but the drop was driven by a jump in self-employed and part-time workers. Naturally, they earn less than their permanent and full-time colleagues, but fact is, real wages have long been stagnant, and have begun falling, across the UK economy. 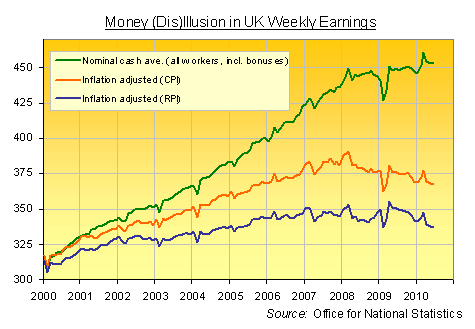 "Millions of workers will suffer effective pay cuts and a fall in their standard of living for the next four years," says The Telegraph, quoting one of the new government's new Office for Budget Responsibility (OBR) members, speaking this week to MPs in a parliamentary committee.

Don't tell Westminster (let alone Fleet or Threadneedle Streets), but millions of workers have already suffered effective pay cuts and a fall in their standard of living.

Glancing back at the last decade today, the average UK worker might guess what the average gold buyer feared way back when. That the credit boom – with its lifetime mortgages, spiralling credit-card limits and plunging savings rate – was just a classic case of money illusion.

How best to buy gold today...? Make it simple, secure and cost-effective by using Bullion Vault...