END_OF_DOCUMENT_TOKEN_TO_BE_REPLACED

Hits support as US inflation hits 30-year high...
CONTRARY to popular belief, what's good for the goose is not always good for the gander, writes Frank Holmes at US Global Investors.
Last week the US Dollar advanced against a basket of foreign currencies to hit its highest level in about a year. For consumers and importers, this is good news, as it means the greenback offers greater purchasing power.
For exporters, on the other, and for the price of gold and other commodities that are priced in US Dollars, this is a headwind
In the chart below, you can see that gold and the Dollar share an inverse relationship. When the Dollar strengthens, the yellow metal falls; when it weakens, gold soars. It's important for investors to recognize this relationship because it can help them manage their expectations.

It's also important for investors to keep in mind that gold continues to be one of the most heavily traded assets on the planet, in case they were wondering if Bitcoin is stealing some of its thunder as a store of value.
I often tell people that gold is the fourth most liquid asset, but the most recent data from the World Gold Council (WGC) shows that it's actually the second most liquid asset following S&P 500 stocks.
The precious metal's average daily trading volume for the one-year period through September 28 was $183 billion, compared to the S&P 500 with nearly $235 billion in average daily volume. That Dollar amount is enough to beat currency swaps as well as all government and corporate debt.
The WGC measures gold's liquidity by looking at data provided by global commodity exchanges, over-the-counter (OTC) markets and gold-backed ETFs. 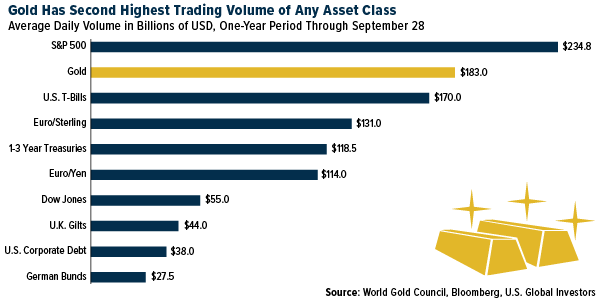 Gold traded slightly up last Friday following the release of economic data showing that consumer prices jumped the most in 30 years. The personal consumption expenditure (PCE) index, which reflects changes in the prices of goods and services purchased by US consumers, rose 4.3% year-over-year in August, the ninth straight month of accelerating inflation.

The PCE, by the way, is the Federal Reserve's preferred measure of inflation.
Fed Chair Jerome Powell, who earlier this year predicted inflation would be "transitory", admitted last week during a Senate hearing that the bottlenecks and supply shortages that have contributed to higher prices were "frustrating" and that we should see more of the same pressures into next year.
It's not just the price of consumer goods that are soaring right now. Home prices, as measured by the S&P CoreLogic Case-Shiller National Home Price Index, rose 19.7% in the year ended July 2021, the highest annual rate since the index began in 1987.
Apartment rents around the US are also heating up. According to Zillow, the average listed rent in August was up 11.5% compared to last year, which some cities in Florida, Georgia and Washington seeing increases of more than 25%.
Oil is also at multi-year highs, despite the stronger Dollar.
Because it's priced in US Dollars, oil ordinarily tumbles when the greenback strengthens, but that wasn't the case last week. Brent crude, the international benchmark, has topped $80 a barrel for the first time in nearly three years due to ongoing supply disruptions. Brent was trading well above both its 50-day and 200-day moving averages, which is a bullish sign.
What this means is that US exporters are faced with the double-whammy of a stronger Dollar and higher fuel costs. 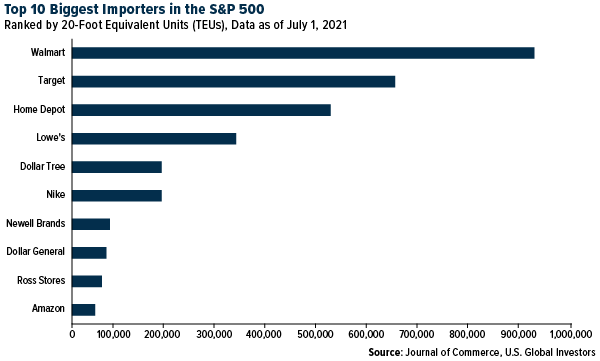 The largest publicly traded exporting company in the US is International Paper. The Memphis-based company, which manufactures paper and packaging goods, shipped close to 220,000 twenty-foot equivalent units (TEUs) in 2020, according to the Journal of Commerce (JOC).
That's second only to the privately held Koch Industries, which was responsible for exporting more than 280,000 TEUs last year. Koch is a massive conglomerate that, like International Paper, focuses a large part of its business on paper and pulp products.
Again, a strong greenback is a tailwind for companies that do a lot of importing. Below are the S&P 500 companies that do the most importing, with Walmart topping the list at a jaw-dropping 930,000 TEUs.
Like a lot of analysts, I see the recent surge in oil prices as a short-term headwind, and already there's been some contraction due to the stronger Dollar and bigger-than-expected inventory build.
As such, this could be an attractive buying opportunity for airline stocks as the share of people fully vaccinated against Covid in high-income countries continues to increase.
I'll be blunt: When it comes to airlines, the oil price increase is just more FUD (fear, uncertainty and doubt). It's true that fuel is one of the airline industry's biggest fixed costs, but what's important for investors to understand is that higher oil prices have historically helped carriers demonstrate a certain level of capacity growth restraint. Unprofitable routes have been cancelled, for instance, which has contributed to higher load factors.
Plus, I would recommend investors pay more attention to airlines' ancillary revenues, which play an increasingly important role in driving sales and cash flow. More and more, these revenues help offset higher fuel costs, something that was not necessarily the case 10 years ago when oil was above $100. In 2020, ancillary fees fell in absolute terms, but they represented a bigger piece of airlines' total revenue.
Right now, vaccination rates and government policy are in the pilot's cabin, so that's what investors should be focused on instead.
Before the Delta variant, leisure air travel had already returned to 2019 levels. Now that vaccination rates look good in most high-income countries and international travel restrictions are being lifted, I expect to see business travel make some progress.