END_OF_DOCUMENT_TOKEN_TO_BE_REPLACED

Watching the yield curve for inflation/deflation and gold...
WE ALL KNOW that the post-pandemic world is currently rife with supply bottlenecks and frustrated demand, writes Gary Tanashian in his Notes from the Rabbit Hole.
We also know that the Federal Reserve and its fellow central banks sprang into heroic action (you know that is sarcasm) to fight the good fight against the dreaded liquidity event that came upon the macro markets and economies early in 2020.
The combination of tight supply and printed money has obviously increased prices for materials, commodities, labor and so on.
Central banks (esp. the US Fed manipulating the world's reserve currency) created it (through monetary policy) and governments (esp. the reflating US government) pushed rising costs into the economy (through fiscal policy). It's more Fed-printed Dollars chasing limited asset resources as the government stocks up on the pork.
It's the old story of deflation being used as a lever for the creation of new inflationary phases all along the decades of the 30-year Treasury bond yield Continuum. Most recently, when yields and inflation signals were failing badly in early 2020 there was no other option but to create more inflation, which is after all the very thing the modern system runs on; Inflation onDemand as indicated by this long-term view of the 30yr yield and other macro signalers. 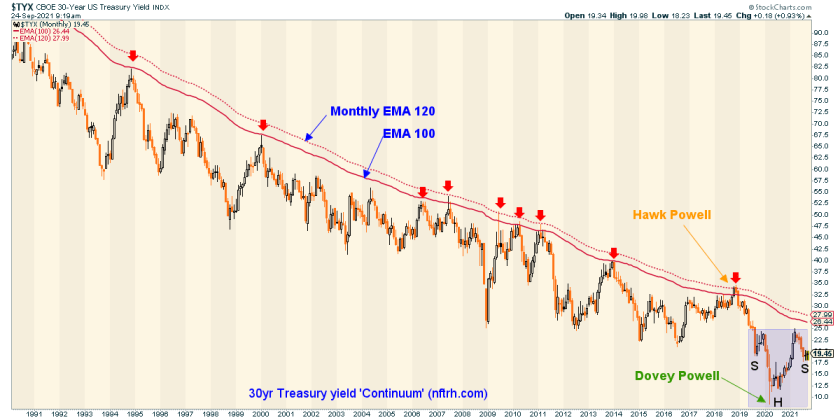 But when the economic rope slackens, that is to say when the pent up demand of the post-pandemic world eases perhaps at the same time that inflation signals remain lofty or are accelerating what do you suppose will be the outcome?
Sure, something...some over-leveraged and systemic thing (not talking about the much hyped Evergrande here) could liquidate the whole system. But more likely the process will play out where inflation eventually becomes burdensome enough to fail of its own bloated weight. Then would come the definition of said failure; outright deflation or ongoing inflationary effects in the form of a more virulent interim Stagflation?
Since the 2020 liquidation the markets have seen a recovery, which was initially and best signaled by the Tech and Gold Mining sectors.
That was logical (and by NFTRH, expected) because inflation traders had not yet emboldened (and indeed, were still in hiding) and these sectors do not depend on inflation. Tech prefers Goldilocks (not too hot, not too cold w/ respect to inflation signals) and gold miners' best fundamentals benefit from a counter-cyclical macro (for all the reasons I've belabored over the years and been ignored for by a majority of bugs who are of course, inflation bugs).
But I digress. Moving on and speaking of gold, the macro inflationary operation – despite the Fed's moderately hawkish tone this week – continues on in a cyclical fashion, not yet overtly stagflationary and certainly not yet counter-cyclical.
What we have had for the last several months was a 'summer cool down' in inflationary signals into a Goldilocks type environment as well anticipated in NFTRH (and noted publicly thereafter). It was as simple (well, not really but work with me here) as the public got too hysterical about inflation and it was just time.
With respect to gold, its time will come. That time would be in the depths of a deflationary meltdown or more likely, in the midst of a stagflationary economic impairment. But for now, the trends in cyclical indicators have not yet turned negative, although there has been a flattening of these cyclical inflationary signals to varying degrees since the spring. 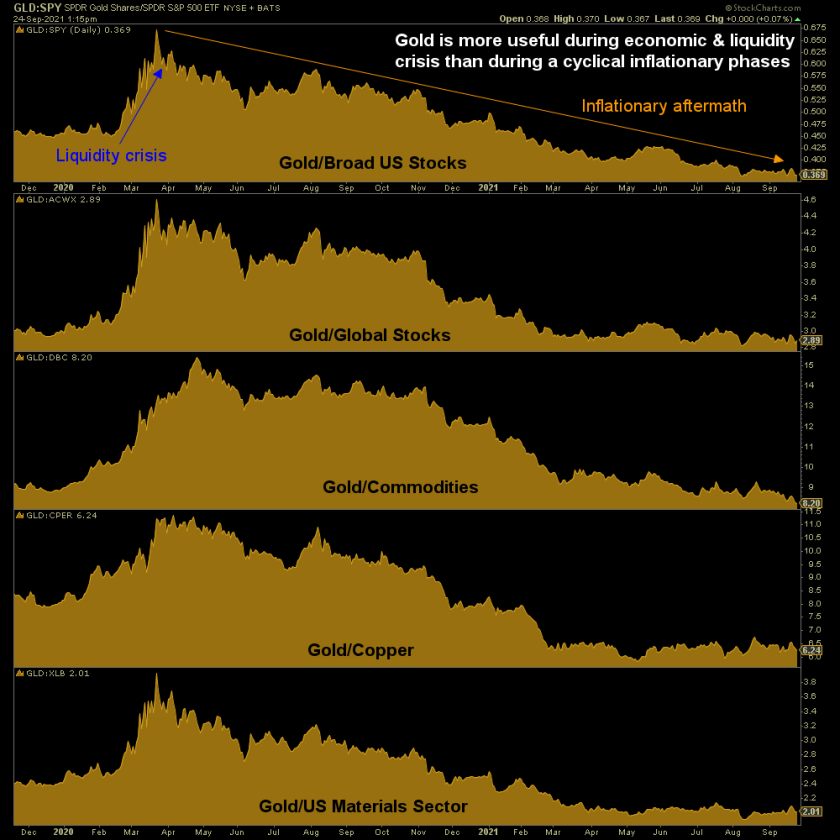 It is time to prepare for the 2022 macro. The options range from Stagflation to a continuation of the current Goldilocks backdrop to deflationary liquidation or even some combination of these macro conditions, depending on geographical region and/or asset class.
With policymakers micromanaging the markets to an intense degree as never before the inputs are difficult to quantify in any given short-term phase. But at some point when the economic rope slackens the macro will pivot into the next major phase and outside of a less likely Goldilocks, that phase will not be pleasant if not anticipated and managed well. Join NFTRH for guidance every step of the way. We successfully managed the 2020 crisis and inflationary recovery as well as many crises and phases previously over the years. While the here and now is choppy in its signaling, logical plans will become apparent before long.
A blessed Goldilocks economy is our less favored option for 2022. She runs with a flattening curve like the one during the 2013-2019 phase. If it steepens, forget about Goldilocks and prepare for either an inflationary or deflationary steepener.

No forward look at the economy and financial markets from an inflationary/deflationary point of view would be complete without consideration of the Yield Curve.
Here is its status at the time of writing. It is making a steepening hint along with the rise in bond yields. That signaling is inflationary, at least for now. But in 2008 the curve morphed from an inflationary steepener to a deflationary one and that's an important distinction.