END_OF_DOCUMENT_TOKEN_TO_BE_REPLACED

MARKETS can rise a long way before a rate hike regime finally kills them, writes Gary Tanashian in his Notes from the Rabbit Hole.

Especially if the backdrop continues to feel like inflation.

What markets would benefit, and in what differing ways would they benefit if an inflationary phase comes to dominate?

That is a far reaching question and a difficult one as well, because inflation's effects have a way of being unpredictable. How many would have answered 'US stock market' in the spring of 2011 to the question "Where will the post-crisis inflation to date manifest on this cycle?"...?

Applied Materials last week have a stellar quarterly report, which might mean big things for the economy, the Fed, the gold sector and – most of all – the idea of an inflationary backdrop becoming more readily apparent (2003-2007 Greenspan style).

Semi-conductor stocks are still in post-2012 'leadership abdication' mode, technically speaking. If that changes and the Book-to-Bill changes trend, we will need to evolve our plans from counter-cyclical to 'inflationary growth', which was the phase that held sway for several years into the big market top in 2007.

The Book-to-Bill (released May 24) took a big jump this week (data for April) and the Canary in a Coal Mine's Canary (Semi Equipment is an earlier cyclical signpost than the broad Semi sector, which itself is often an early cycle leader) is chirping in similar fashion to late 2012/early 2013 when Semiconductor market leadership began.

As for the Semiconductor index, its leadership has wobbled through the market disturbances of the last year. While still at resistance both in ratio to the S&P 500 and nominally, the last week has obviously been very constructive. 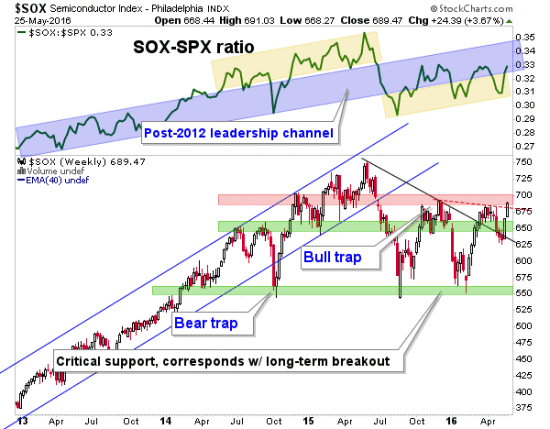 Above, we note that a Semi cycle and its implications would pretty much kill the counter cyclical atmosphere that launched the gold sector (as did the 2001-2002 cycle) and likely signal a phase of inflationary economic growth.

Now, no single indicator can be used to forecast an economy or the markets, but a strengthening Semi sector would be consistent with a growth phase. Again, see Greenspan era circa 2003-2007.

In answer to the subscriber's question about where to invest for inflation I would not profess to be the answer man on a subject with as many variables as global central banks, panicked and spraying market-friendly policy 24/7 through monetary fire hoses for years on end.

Again, 'inflationary effects' is its own animal and capital will fly to various destinations at varying times. The disgusting NIRP policy cooked up in Japan and Europe has the potential to scare people so badly that distortions will likely build in certain asset markets.

Think the US is relatively sound today in its policy stance? Well sure, they have boosted the Fed Funds rate by 0.25%! What's more, they likely have another one or two 1/4 points to come in 2016. But please consider the years of QE's 1-3 and the 7-year run of ZIRP. The inflation was already built in to the structure, as manifested in the US stock market.

On that note, let's look at said US stock market, the prime beneficiary of inflation through 2015. The market is on the verge of negating the bear trend of lower highs and lower lows. While some indexes (like the mid caps) have already done so and the cumulative Advance/Decline line on the NYSE have been bullish, most indexes remain below their April highs. If they rise above that and close a week that way, the end of the bearish phase would be indicated.

If this happens, where to invest in the US? If the US Dollar weakens anew (it remains in a bearish intermediate technical situation despite the current bounce) people should consider manufacturers and exporters. Also, as noted previously, progressive Semiconductor manufacturers, beaten down Healthcare situations, and the Energy Sector, which remains in an unbroken secular bull market.

Here is a chart we have updated each week in NFTRH showing some relatively constructive sectors amid the bearishness in general US markets. 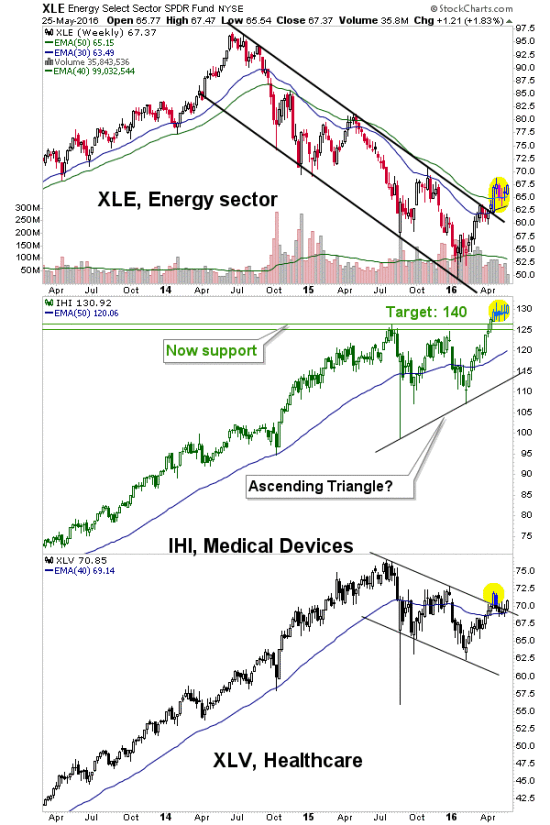 What the heck were Medical Devices doing so bullish during the onset of a bear cycle? Well, in my previous life in manufacturing I had always noted our primary customer base – medical device/equipment companies – were reliably strong throughout the business cycle. Our trades in Boston Scientific (profit taken) and Medtronic (ongoing) are just two of many prospects in this area.

It is important to remember that in the Greenspan inflation the economy did just fine. At that time we had the Dow-Gold ratio and charts like it to put the lie (it was inflation, not productive growth) to it. In 2016 we have had the beginnings of a similar situation, although gold is correcting vs. stocks (and most other assets) lately.

But with the Fed in a rate-hiking stance the Dollar should gain strength, no? No, there is no need for that to happen. We are talking about inflationary inputs that went on for years upon years that were masked by a global deflation, resulting in a US Goldilocks atmosphere. Maybe that will be the case again, but if gold, silver and commodities have indeed bottomed as I believe they have, then we may yet see a Greenspan style phase. Notice how the best part of the 2003-2007 'inflation bull' came after Greenie began a rate hike regime. 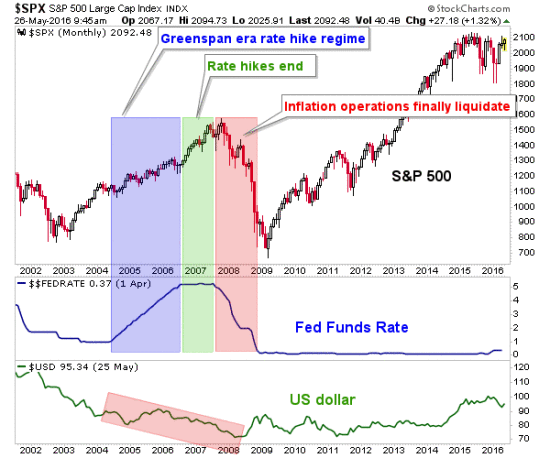 This article is simply a 'look ahead' because we do not yet have confirmations on a bullish turn in stocks and indeed, the goings on in the Semiconductor equipment sector have instigated the current line of thinking much more than something as choppy and erratic (lately) as the stock market has.

As a 'look ahead' this is by no means a call to inflationary action. It is just part of a process of trying to understand which way the macro is likely to go in the coming months and possibly, years.

Meanwhile, let's leave with a look at the sensitive inflation indicator, silver vs. gold. It is a nice inter-market companion to the early economic signal in the Semiconductor sector. 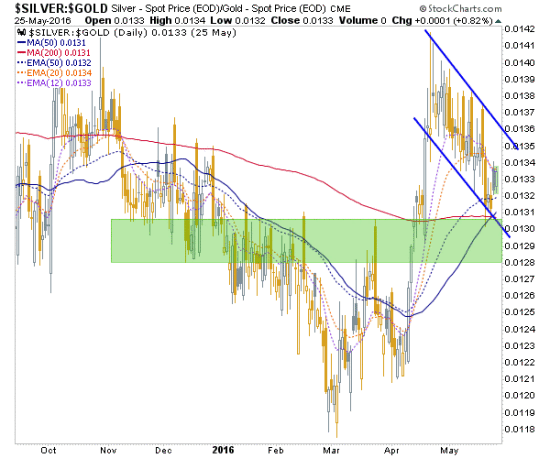 The daily chart of Silver-Gold has been flagging down to support. Has it found support yet or will silver correct further vs. gold? An open question, but what is near certain is that if an inflationary phase is to engage Silver-Gold will once again rise. So keep it in view.