END_OF_DOCUMENT_TOKEN_TO_BE_REPLACED

Governments should do much less – but those who elect them always clamor for more action...

IF WE have been taught one certain lesson by history, it is that the less fettered an economy, the better humankind is able to do what it does best: run from trouble and run toward opportunity. In this way mistakes are quickly resolved and progress assured, writes David Galland, managing director at Casey Research.

Conversely, the deeper the muck of regulation, mandates, taxes, subsidies and other bureaucratic meddling, the slower we humans are in following our natural instincts until the point that progress is slowed or even stopped.

It is said that history doesn't repeat itself, but it often rhymes. In the current circumstances, it appears that enough time has passed that current generations have completely forgotten the critical connection between the ability of humans to freely pursue their aspirations and economic progress.

You can see this ignorance in the popular demand for even more, not less, meddling in the affairs of humankind. Should this trend continue – and for reasons I will touch on momentarily, I firmly believe it will – then the aspirations of the productive minority will soon be dampened by ever higher taxes and other attempts to "level the playing field" and the global economy, already in tatters, will fall off the edge.

The United States has aggressive funding needs, given that the "change" we experienced in the last presidential election has left the government gasping for about $1.4 trillion in additional funding each year. Then there is Japan, officially the world's largest debtor in terms of debt to GDP, where the easy availability of local funding has dried up, requiring that nation to go to the international markets for funding as well.

The phrase "an awful lot of hogs at the trough" comes to mind.

My point is not just that governments are broke and are about to get a lot more broke as interest rates rise on their many debts and financings, but rather that the global trend toward resurgence in public demand for socialism in response to a worsening crisis is a certainty.

How could it be otherwise when for decades now the schooling of children has been delegated to functionaries of the state?

For evidence, look no further than the screen swipe here. It is a quote from an essay by a college student in the United States on role the government should play: 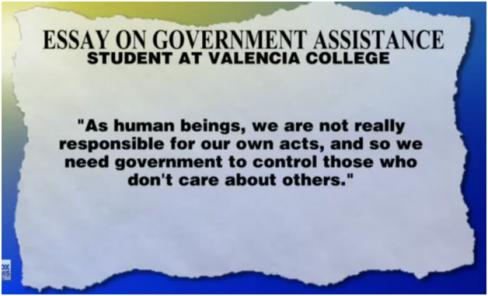 The writer of those words was a member of a Valencia University economics class. The professor, Jack Chandliss, asked the class to write an essay on what the American dream means to them, and what they want the federal government to do to help them achieve that dream.

Out of 180 students participating, only about 10% wanted the government to leave them alone and not tax them too much, but a whopping 80% wanted the government to provide pretty much the whole dream thing wrapped in a tidy bow – including free college tuition and health care, jobs, even the down payment on their future homes, money for retirement and hard cash, taken in the form of taxes from rich people.

The point here is not complex, but it is important.

With the apparatus of state education over many years serving to bamboozle the populace into the hardened belief that government has a positive role to play in virtually all aspects of modern life, it should come to no surprise to anyone that, when push comes to shove, people are now trained to look to government to solve the problems – even when it was the government that created the problems in the first place.

Thus, confronted with the intractable mess they have made, these governments have to keep alive the mythology they have created about their omnipotence. Which is easier said than done, because with things now swirling fairly quickly around the drain, the mob is beginning to lose faith – and even patience.

Which puts these governments in a very tight spot, because the only way they can actually fix things is by doing exactly the opposite of what people have come to expect from their governments, which is always to do more. Put simply, the only hope now is that these governments begin to reduce their roles in their respective economies, and dramatically so. Concurrently, they have to encourage people in their aspirations to greater wealth, by lowering their taxes and unwinding the tangle of regulations they have created over the last half-century.

But if the governments actually tried to take these actions, the brainwashed masses would be positively befuddled then outraged, as it goes against everything they have been taught. Why, it would be like the Pope shuffling his way to the balcony of St. Peter's Basilica and informing the doting faithful that there isn't a god and never has been.

So it is that we find ourselves at a particularly interesting juncture in the historical record.

On the one hand you have a majority of the world's population who have been carefully schooled into believing that the institution of government holds the solution to all problems and is the source of succor to all who need it. (Even that subset of the populace who has lost confidence in their current government invariably believes as doctrine that the next and better government can change things for the better and lead the way to the shining castle on the hill.)

In this mix are the politicians and their functionaries, 99.99% of whom believe that, if for no other reason than their re-election prospects, they have to do something to meet the demands of the public.

Of course, under normal circumstances the "something" usually consists of making grand-sounding speeches and otherwise blowing smoke. Today that's just not going to cut it, for the simple reason that the crisis is real, it is spinning out of control, and it's not going to go away unless and until the markets are allowed to breathe again.

Which brings us full circle to the simple truth that the brainwashed public won't stand idly by while the politicians lower taxes and regulations on the profit makers or cut back state pensions and guarantees or otherwise reduce any of the many services the state has taken on itself to provide.

"Between a rock and a hard place" is an inadequate phrase to describe the situation.

Meanwhile, the mob has started to gather, their dark mutterings heard by the politicos who quickly don the red caps themselves, the better to be viewed as one with the people and join in expressing outrage against the capitalists who have been selected as fall guys in this unfolding drama.

When confronted by reporters about the fact that his 75% tax on high-income owners would raise nowhere enough revenue to offset France's towering debt and social obligations, new French president Francois Hollande was heard to respond:

When coercion and theft are considered moral, anything is possible, and none of it good.

While I certainly can't say how this is all going to end, I'm pretty sure it's not going to end well.

Thinking about a Gold Investment? See how BullionVault can make it dramatically more cost-effective...