END_OF_DOCUMENT_TOKEN_TO_BE_REPLACED

Goldman Sachs is bullish on Gold Prices. Reason to worry...?

If GOLDMAN SACHS is publicly bullish on gold, is that a good thing or bad thing for gold bulls? asks Dan Denning in his Daily Reckoning Australia.

Wall Street's notorious trading house published a report on gold last week setting a price target of US$1300 in the next six months. The report cited several factors. But before we get into them, we'll confess it made us a bit nervous. Whenever a broker is saying one thing, you have to wonder if they're actually doing the opposite.

That said, Goldman did make a point that is true of an asset in a bull market: it requires corrections to shake out the speculators and weak hands from time to time. Following the June high north of $1250 the net speculative long positions declined. Traders took profits. And so did momentum players in the exchange traded funds market.

But then something happened that naysayers such as Michael Pascoe and Rory Robertson did not expect. The gold bubble did not pop. Because it's not a bubble. The momentum players departed and the price found plenty of support. It's now around US$1220.

Goldman says the big catalyst for a further move higher (other than its announcement leading to a stampede of money into gold short-term) is a repricing of US growth expectations for the rest of this year and all of next. Maybe it's a fear trade, or just bearishness on US corporate profits when unemployment keeps rising.

Either way, about the only dubious chart we saw in the whole report is the one showing lower US real interest rates and the Gold Price (exhibit five). As those cool cats in statistics say, correlation is not causation. Its possible low rates give speculators fuel to play in the gold market. But it's more likely, we reckon, that US rates are low because the bond market is pricing in a deflationary scenario.

So why would gold rise in a deflationary scenario? Good question! It brings us full circle to the argument fund-manager David Einhorn made when we announced his gold position: you Buy Gold when you think monetary and fiscal policy are bad (we're paraphrasing). Whether it's inflation or deflation matters less than the fact that something unconventional and bad is going down. Gold does well in that environment, what with it being real money and all.

Take a look at the Aussie Gold Price chart below. It shows you that gold is much closer to making a new high in US Dollar terms than it is in Aussie Dollar terms. For Aussie gold to match the greenback gain, you'd need a much stronger greenback or a much weaker Aussie. It's worth noting that following the Fed's announcement that it would sort of begin quantitative easing part two, the Aussie made the second-largest declines against the greenback, trailing only the dreaded Esperanto currency, the Euro... 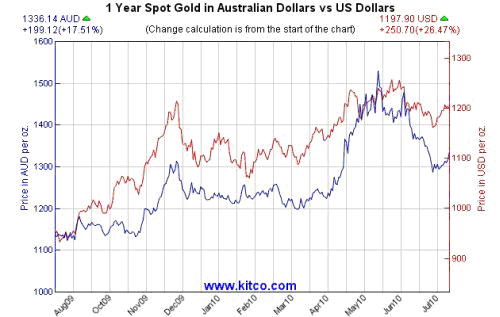 As we have banged on about gold for years now, we won't test your patience much longer. But last week's news that the Aussie unemployment went rate up in July wouldn't be Aussie Dollar bullish, would it?

Maybe the Aussie will get a boost when this miserable Federal election nonsense is over. When thinking about the election we recall the phrase, "Don't vote! It only encourages them." Of course voting in Australia is compulsory. But it might be a fine worth copping if you can say you weren't an accessory to "the advanced auction of stolen goods," as Mark Twain once put it.

Seriously. If anything is clear so far about the difference between the two major parties, it's that both treat Australians as chattel. We are but tax slaves who exist to fund the government's spending pleasures. And the Greens? More like the Reds!

But that's all politics. Financial independence is the only real defense against this kind of relentless State encroachment from all sides. Get it. Keep it. Defend it. And whether you like it or not, more and more governments across the world are spending out of an empty pocket. They're spending to give people money that've lost jobs as a result of the structural shift in the labor markets. That shift came from globalization. The money might keep people above water for awhile, but it's no replacement for a real job making real things.

More and more spending is going to simply pay the interest on previously borrowed money. This is probably the most dangerous aspect of a credit bubble. You borrow and spend all that money and, and the end of the day, you have nothing to show for it...no bridges...no roads...no factories...no real increase in the capital stock. Just a lot of over-priced residential housing that suddenly isn't in such short supply as you thought. And now Australia finds itself at an interesting crossroads.

Just a little debt didn't seem like such a bad idea at the height of the global financial crisis. Both Australia's major political parties now promise to pay it off quickly, with all the bounty from mineral and energy royalties. Both will increase spending too, but in different places, cutting other spending priorities.

But should the housing bubble pop sooner rather than later, and should Aussie banks find themselves last in the queue for global capital in another phase of the Great Correction, the temptation for more government borrowing will be nigh irresistible.

Why? Well, our stance against government debt may seem dogmatic. But if it is, it's because the modern State always abuses the power to borrow. Always. Whether it's to fund politically popular but economically unproductive projects, or whether it' just a way of putting off tough choices about actually reducing government spending and, thus, the reach of the State into private life, it's always easier to borrow and kick the can down the road.

Debt is the health of the State in the same way that liquor is the health of the alcoholic. The relationship is inherently destructive. But we reckon that in the face of so much unproductive debt (household and sovereign) the only politically palatable policy response will be to monetise that debt: pay it off or buy it from bank with new money. The deflationists can enjoy their moment in the sun while it lasts. But it won't last for long at this rate.