END_OF_DOCUMENT_TOKEN_TO_BE_REPLACED

US debt is rubbish. So why are investors buying it...?

YOU GET the sense, don't you, that the European Union and the IMF are losing their grip on Europe's sovereign-debt crisis? The deals they've reached to help Greece and Ireland are already coming unstuck. And Italy's sovereign-debt problem dwarfs all the peripheral countries combined, says Dan Denning in his Daily Reckoning Australia.

The end game is approaching. The European Central Bank can't stomach a default on sovereign debts because that would wipe out the value of its collateral. It would have to be recapitalized. And where will that money come from? What are the alternatives?

Europe's finance ministers must be sweating behind closed doors. In public, they are blaming the messenger. The French politician who's in charge of Europe's single market (whatever that means) is named Michel Barnier. He says he will unveil "stiff measures" in November to strip the ratings agencies of their powers.

The ratings agencies aren't to blame for Europe's debt woes. And honestly, the ratings agencies haven't exactly sounded the alarm on risky debt in recent years. They change ratings only when announcing the obvious is a safe public position to take. No, they are not at fault for the debt problem.

For the conspiracy minded, you could make an argument that this is all part of the currency war. You could argue that the US-based ratings agencies are ramping up the crisis levels on European debt in order to drive investors to US Treasury bonds and notes. This would drive up US bond prices (good for US banks) and drive down US interest rates (good for US borrowers, including the biggest borrower of them all, the US government).

The chart below is a US-based index that tracks the yield on 10-year US notes. The lower the index goes, the lower 10-year interest rates go. You can see that in late June 10-year yields went up five days in a row and over three per cent. This rise was in response to America's own debt-ceiling brinksmanship. Over the last three days, though, the downgrades in Europe and the emergence of Italy as the next big flash point have driven people into US bonds and notes and pushed 10-year yields right back down. 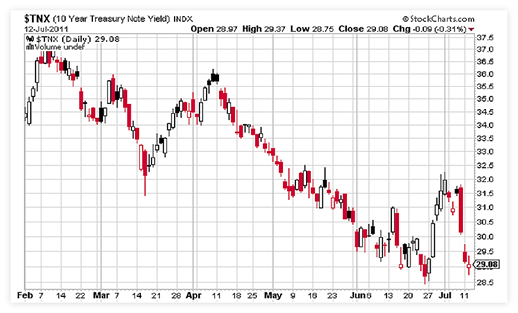 The proverb "Any port in a storm" comes to mind when you look at a chart like that. The only possible reason you'd buy US government debt right now—when that country has annual deficits of $1.5 trillion and a total debt of $14 trillion—is that it's NOT European government debt. It's a purely relative trade. The US debt is relatively safer than European debt—for now.

On an absolute basis, US debt is rubbish. This is the problem at the business end of a credit crisis. Most debts are just promises to pay. And when people or governments are broke, they break those promises. Government bonds might traditionally be viewed as safe and low credit risk. But they're still just a promise to pay.

Gold, of course, is not a promise to pay. It's element number 79 on the periodic table. Its physical qualities make it hard to counterfeit or produce on demand. It's portable, divisible, durable and the same everywhere in the world. These physical properties have made it a reliable medium of exchange for thousands of years. Its intrinsic qualities make it very useful as money.

In US-Dollar terms, August gold futures closed up nearly $20 to $1568.10. That's a new closing high. Gold rose in Dollar terms despite investment flows into US bonds. And in Euro terms, gold also made a new high at €1119. What about in Aussie Dollars?

So, what is the chart telling you? Well, the purpose of the comparison is to see how gold has been performing in Aussie-Dollar terms. The short answer is: strongly. The Aussie Gold Price hit an all-time high of $1546 in early 2009. At that time, it took you only 60 US cents to buy an Australian Dollar. Since then, the Aussie Dollar has appreciated strongly against the US Dollar. But the Aussie Gold Price has held pretty much rock steady and is perched just below its lows. 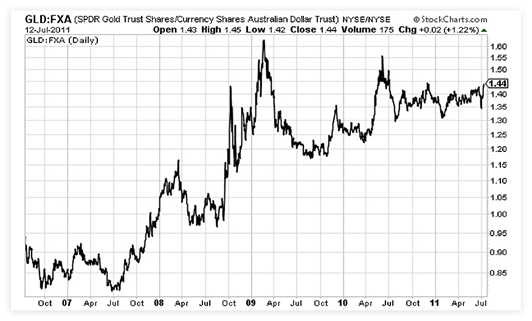 Are the ratings agencies communicating accurate price information about European debt? It's hard to say. And now the Wall Street Journal is reporting that European banks may be routinely overstating the demand at auctions for European government bonds. Yet earlier in the day, stocks reversed huge early losses at least partly on news that an auction of one-year Italian government bonds went off without a hitch.

Hmm. So who is conning who? Are the ratings agencies artificially pushing down the Euro to prop up the Dollar? Or are the European banks artificially propping up the Euro by lying about the demand for government debt? Or is everybody conning everybody as the world's financial system totters and creaks?

The safest bet, in financial markets, is to trust no one and do your own homework.

Thinking of buying gold? Find out more at BullionVault...