END_OF_DOCUMENT_TOKEN_TO_BE_REPLACED

How gold-backed money held its real value for 350 years in the US and Great Britain...

COME THE END of the Spanish War of Succession, the French King, Louis XIV – who confessed that he "loved war too much" – owed the equivalent of £300 million.

Across the Channel, that other arch-meddler in Spain's domestic affairs, Great Britain, owed only £49 million. Which might have looked a little like financial victory. But then, the United Kingdom's population was only one-third the size of the French.

And those debts in 1715 – priced in "hard money" weights of gold or silver, both in even tighter supply than they are today – were almost 20 times the sum England had defaulted on four decades before.

Whereas in 2009, three centuries later, the UK Treasury will extend its debts by £118 billion this year alone. That's not only 2,500 times what it owed in 1715 in nominal pounds. It's also twice the entire national debt that forced the last Labour government to beg an emergency loan from the International Monetary Fund (IMF) thirty-three years ago.

Now that's real inflation for you! And for everyone else too, unfortunately.

"From the time the United States went off the Gold Standard in 1933 the wholesale price level has gone up by 760%," noted Professor Roy Jastram, author of The Golden Constant, in December 1981.

"Since England abrogated the Gold Standard in 1931, her price index number has risen by over 2,000%."

Both in the US and UK, the general price level since Jastram spoke to the Security Analysts Society of San Francisco has more than tripled again. All told, here in London, the British Pound has lost 98% of its purchasing power since that fateful September day when the UK government lost its nerve, and the The World Lost Sterling's Gold Standard Forever.

"Before that, the two countries had a combined history of 350 years of long-run price stability," Jastram went on. "The price level was the same in the United States in 1930 as it had been in 1800. In England the price index stood at 100.0 in 1717 (the first year of her gold standard) and it was at that figure again in 1930."

And all thanks to the magic of gold – that "golden constant". Right? 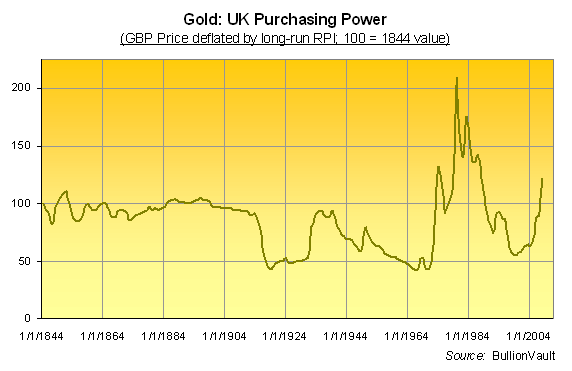 To be sure, the gold-backed Pound did a phenomenal job of preserving its purchasing power for the 200 years starting when Sir Isaac Newton – he of the Laws of the Motion, but also Master of the Royal Mint in 1717 – established the Pound Sterling as a certain weight of silver.

Newton thus, since the two were interchangeable as cash payment, also set the Pound as a smaller weight of gold ("a pound weight of fine gold is worth fifteen pounds weight six ounces seventeen pennyweight & five grains of fine silver" to be precise) which over time, won out over silver as the arbiter of currency value worldwide.

As our chart shows (hat tip to Statistics.gov.uk for the long-run inflation data), tying money to gold delivered ups and downs in the price level. But overall, costs stayed remarkably steady for the 70 years starting in 1844 – back when the Bank of England was granted monopoly power to issue the currency.

Then the guns of August blew a hole in the Pound's convertibility. Despite a brief rally after the ill-advised move to restore the old Gold Standard in 1926, Sterling's long-run value just continued to tumble, as Jastram points out.

As for gold, its purchasing power also suffered during Europe's second "Thirty Years War" (in Winston Churchill's phrase), at least when held outside of government hands. Banned from owning it in the United States, private individuals could scarcely trade it for profit in London. Pretty much all of Britain's bullion had already been nationalized long before (right as the Gold Standard Reached Its Zenith, in fact) and now it was needed to buy arms and munitions from across the water.

Don't you know there was a war on? Or as Marc Faber put it in his Gloom, Boom & Doom Report last autumn (Is there a way to preserve wealth?, Oct. 08), "I can see the gold bugs jumping off their seats and protesting that gold has kept its value (purchasing power) over the course of history. But the problem is that the owners of the gold also changed over time.

"So, when Timur sacked Aleppo and Damascus in A.D. 1400, it didn't help to have your savings in gold," the Swiss private-client fund manager adds. "You lost your life and your gold. Women had a better chance of survival and got a one-way ticket to Samarkand."

Luckily for investors and savers with something less than their lives or liberty to lose 500 years later, the US and UK governments liberalized gold ownership just in time for Gold Prices to shoot higher on a tide of government-wrought inflation in the 1970s. (It's also worth noting that, in line with how gold owners could survive the four-decade US ban starting at the depths of the Great Depression – and actually benefit from the revaluation of gold that accompanied it – Marc Faber advises holding physical gold overseas, free from the political and/or social risks of your own domestic jurisdiction.)

Finally cut free from artificial government values by Richard Nixon in 1971, gold broke back above its old Gold Standard par in terms of UK purchasing power in 1973. It then spent almost 16 years – after accounting for inflation and changes in gold prices – worth more than it had been throughout the late 19th century, the high-water mark of gold's international power as the only true, single, irrefutable currency.

And amid the current bull market in gold, its real value for UK investors only just broke back above that level again, just as 2008 turned into 2009. For US investors, gold recovered its 1900 value at the start of 2007. 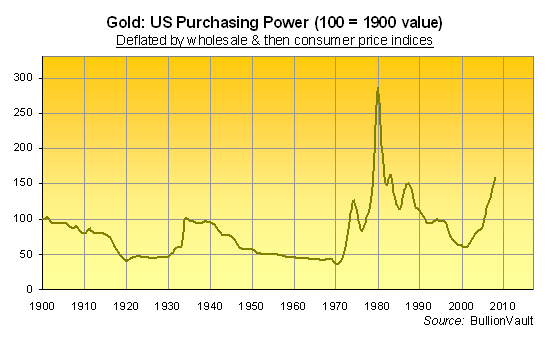 That's the nature of a mean-reverting asset, of course. Its price reverts, if given time (and free ownership, priced in a free market) to its long-run average value.

But that also means that the average itself will have to revert as well. And revert to what?

The starting point of any particular data series – not least if pegged by mankind, even the genius brain of Isaac Newton way back in 1717 – might not necessarily be "correct" for the long run that follows. We can't judge the "true" value of gold simply from its historical start.

What if that apple bruised more than Sir Isaac's head? More to follow in Part II...