END_OF_DOCUMENT_TOKEN_TO_BE_REPLACED

Three reasons you need your own private Gold Standard, rather than waiting on "sound money" from government...

SO DID GOLD's first foray over $1,400 mean we're going back to a Gold Standard? asks Adrian Ash at BullionVault.

Nope. Not in the West, nor anytime soon anywhere, and for three simple reasons.

First, Gold Prices aren't high enough. Second, modern governments don't hold enough of the stuff – not for their tastes, at least. And third, the pace of physical monetization, out of jewelry and mined ore into coin and large-bar form, just isn't great enough. Yet.

Gold Pricing & Value
Backing the world's broad-money supply with gold – even at the 40% cover-ratio set by the United States in the interwar years – would require a price nearer to $4000 per ounce than $1400. That's with all the gold ever mined in history locked inside central-bank vaults, by the way. Full cover for a reserves-backed "bullion standard" would need prices above $10,000 per ounce.

Nor against financial assets is gold priced highly enough to warrant becoming the world's sole monetary arbiter. Now valued at $7.6 trillion, the near-170,000 tonnes of gold ever mined in history is worth only 3.9% of total investable wealth. That figure compares with well over 20% before 1930 – a valuation which at current mining-production rates (and with constant asset prices) would require a gold price of $6650 per ounce by 2015, or $6230 by 2020 on BullionVault's maths. 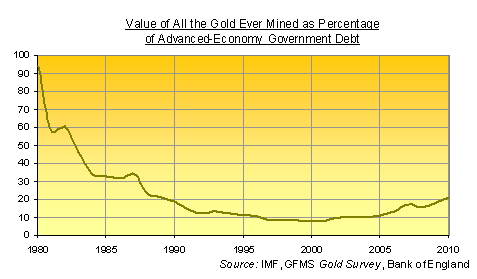 So, although recovering from what was, a decade ago, the weakest role it ever played in the world's financial system, gold remains dwarfed by other, more widely-held and heavily-weighted assets – most obviously the US Dollar and Treasury bonds.

Official-Sector Gold Holdings
As a proportion of the above-ground total (a cube now measuring some 20.65 meters along each edge), world governments haven't held this little gold since 1911.

Yes, that period marked high tide for the classical gold-coin standard. But with the ebb came the Federal Reserve, the welfare state, and "mixed-economy" planning – historical facts which have scarcely retreated, even as the nationalized gold stocks they first confiscated fell back. 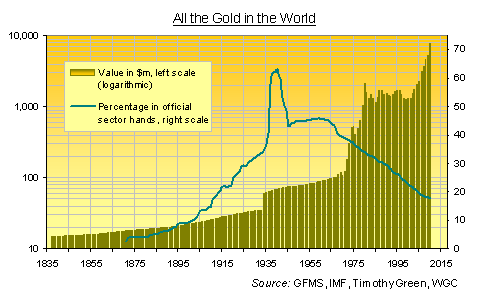 Demolishing these pillars of "soft money" in the next five or 10 years, let alone unwinding the centralized urge to control price-levels, GDP growth and the free transfer of capital, looks less likely than even another quadrupling of gold prices.

Nor do the largest gold holders – those states nearest to a practical level of cover – show any enthusiasm for mobilizing their gold hoards as part, never mind the base of their monetary systems. The No.1 official holder, the United States, last flirted with talk of a return to gold in the early '80s. But back then, gold's private-investment weighting was six times greater than today, and double-digit interest rates gave cash savers positive real returns on their money (post-inflation) for the first time in a decade.

Such a "hard money" backdrop remains a long way off today, despite the fact that the US could actually back its currency in circulation with a 40% cover-ratio at current prices ($1390 per ounce, in fact). Money is much more than just notes and coins today, of course, and to cover M2 – meaning primarily household cash savings, held on deposit and in money-market accounts – the Treasury's 8,133 tonnes of gold would need to be valued almost 10 times higher per ounce ($13,230). Absent that kind of price, and given the deflation-fearing consensus amongst central bankers and the academics they listen to, it ain't going to happen. We need devalued currency, not sound money, believe the people who could decide such a change.

Physical Monetization of Gold
This dim outlook for a dictated return to some level of "Gold Standard" in the rich West, however, won't prevent private savers, nor emerging-economy states, from continuing to build their own gold reserves.

Demand for "monetary" gold (i.e. coin and bar) worldwide is now running at twice the pace of five years ago, eating perhaps 49% of 2010's total global-market supplies in the form of low-margin units for trading and storage, rather than as jewelry, bonding wire, dental fillings, or flakes floating in schnapps. But is that pace enough? A little under a century ago, Joseph Kitchen (he of the wonderfully-named 'Kitchen Cycle' in commodity prices) studied bullion flows and found that – in a world where gold had been money, formally, for over 200 years – monetization of newly-mined gold was running well above 45%. Jewelry recycling no doubt topped that level, while existing monetary units surely retained their form.

Furthermore, at present, a little over a third of the world's above-ground gold is currently held in coins or bars (as measured by best estimates for investment plus central-bank stocks). But even at current rates of investment fabrication, it would take 15 years to raise that physically monetized level to 44%, the average proportion held by central banks between 1945 and 1971, the first (if not last) period when interventionist, welfare states in the West yoked their money supplies to gold.

So must gold play no role in money? Indexing a notional, government-only Bancor currency or Special Drawing Right against a basket of, say, Dollars, Euros, Yuan and gold might seem wise, but it appeals to the same thinking which gave us the United States' exorbitant privilege of Dollar issuance, plus that explosion of state intervention in all economic activity which we're still very much living with today. Whereas, in time, the sheer weight of privately-held gold reserves may in fact tip us back towards the origins of the classical Gold Standard. Because that historical "accident" (as gold-market historian Timothy Green calls it in his Ages of Gold) developed out of freely-decided convention – not central-bank diktat or academic theorists sitting in Princeton, Berkeley or on Southwark Bridge – with private actors trading goods and settling debts with transfers of bullion.

Even in 1900, private holdings of Gold Coins still exceeded central-bank hoards worldwide, only losing ground as Europe's second thirty-year war drew near and nation states began hoarding for war, vaulting for victory. It wasn't until Great Britain re-introduced gold convertibility in 1925 that the Bank of England issued paper notes to represent its gold holdings – rather than enabling free circulation of metal in coin – thereby shifting the world from a gold-coin to a bullion standard.

So never say never. Because the largest hoarders of gold by far today are the newly-enriched consumers of emerging Asia's two largest economies. India's world-beating appetite is beginning to devour low-margin investment coins and bars once more (some 30% of the subcontinent's gold purchases, according to Sunil Kashyap at Scotia Mocatta). Chinese households have bought more gold in the last two-and-half years than the People's Bank holds in total – and here too, cost-efficient coins and bars are gaining fast on non-investment forms. 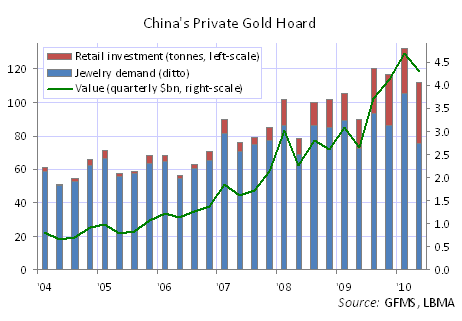 Actively encouraged by Beijing, China's rapid private accumulation of both gold and silver should remind economic historians that only structurally sound, growing economies have ever employed precious metals successfully as their monetary standard. We'll have to wait and see whether China quite fits that bill. But gold has never been a panacea for weak, over-indebted states, as the disaster of Britain's return to gold in 1925 proved.

"Our gold standard is not the cause but the consequence of our commercial prosperity..."

Still, Western investors fearing what Asia's rise could do to their own standard of living might also consider getting the jump on China's rapid accumulation of privately-held gold. For as long as gold is used to store value, rather than directly for buying and selling, then seeking out the most efficient, most secure route to owning it, and converting your gold into widely-accepted currency as you need, looks the next best thing to enjoying gold-backed currency – your own private Gold Standard in a world of central bankers hell-bent on devaluing your savings.

Get started now, with this free gram of physical Gold Bullion at the award-winning, mining-industry backed world No.1, BullionVault...